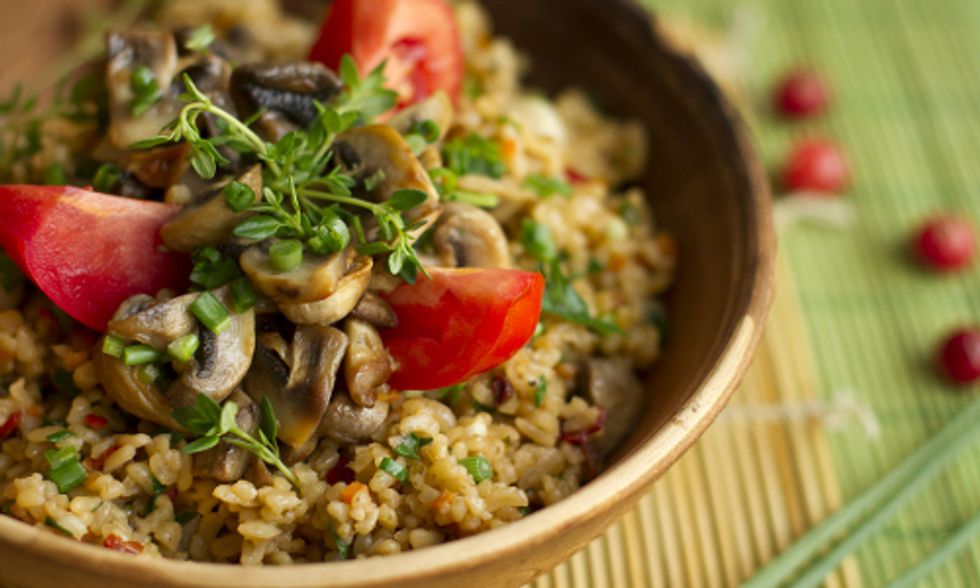 A few years ago, you probably didn't known any vegans. Most of us didn't. Now you probably have a dozen friends who have adopted this no meat/no dairy/no animal products of any kind diet. It sounds healthy; it even sounds a little tempting. But it also sounds like a lot of work and a little bland. Don't you always have to be on your guard? Is that vegetable soup made with chicken stock? Is there anything on the menu of that hot new restaurant you'll be able to eat? Do you have to snack on nothing but carrots and apples? Doesn't it mean a lot of prepping and cooking when you could just stop at the fast-food burger place ... wait. You don't want to do that! There are ways to make vegan eating not only easier but more fun, even if you can't afford Beyoncé's Vegan Meal Delivery.

Throwing together a tasty vegan dish is easier than you think.
Photo credit: Shutterstock

1. Make sure your cupboard is stocked with the basics, the "meat" of your meals. That means rice, dairy-free pastas, beans, quinoa, barley, all the things to which you can just add vegetables and have a terrific meal. Vary them too. Try different types of rice—just out your local Asian grocery for exotic types. And experiment with different types of whole grains like spelt, emmer or teff, which are becoming increasingly easy to find at markets as more people get to understand how healthy they are.

2. Think simple. If you get home and you're tired, there's really almost nothing to prepare than a vegan meal. Chop some fresh veggies in a bowl and top them with a little olive oil and balsamic vinegar, or maybe even just a squeeze of lemon in the summer; stirfry some veggies in oil and throw them on some rice or quinoa in the winter. That's not going to take you less much more than five minutes, less time than making a hamburger.

3. That's especially true if you prepare food in advance and have it ready in your fridge to use. Pre-chop some of those salad vegetables and stash them in containers ready to toss into your salad bowl; cook up a mess of rice and have it on hand to re-heat. If you have a leisurely evening at home, cook a huge pot of spaghetti sauce or vegetable soup, letting the flavors simmer, and then freeze more of it to eat later when you just need something to quick.

4. Stock up on herbs and spices. Nothing adds zing to plain old vegetables and changes the entire flavor of a meal faster than herbs and spices. You can take exactly the same vegetables and by changing what you add to it transform it from an Italian meal to an Indian meal to a Thai meal. Just swap out the oregano for turmeric, the turmeric for lemon grass and basil. Play around and try an exotic spice you've never heard of. Not only do herbs and spices bring an almost limitless area of tastes, but most of them have health benefits too.

5. Go to the farmers market. In mid-summer when the harvest abounds, it's hard to see why everyone isn't vegan. This is the time of year when you want everything you see at the farmers market—the juicy tomatoes, the crisp peppers, the intriguing eggplants in a variety of colors and shapes, the ubiquitous zucchini. It's hard not to overbuy. But you don't have to feel guilty because it's all good for you, you're supporting local growers and you can make that big pot of soup to freeze that we mentioned earlier.

6. Join a CSA. CSA stands for "community-supported agriculture." The concept came about as a way for small farmers to plan their seasons by having subscribers pre-pay to receive a weekly bag or box of food during the growing and harvest season. Sometimes farmers join together in order to provide a greater variety of items, and some even include items like honey, jams, eggs, and meat. You won't want those latter two items, of course, but even the CSAs that offer them usually have all all-veggie option. The fun part is that you never know what you will get, and the contents will change depending on what's in season. But as long as you're pretty much OK with any kind of vegetable, that unpredictable little goodie bag can be an adventure that inspires you to try new things.