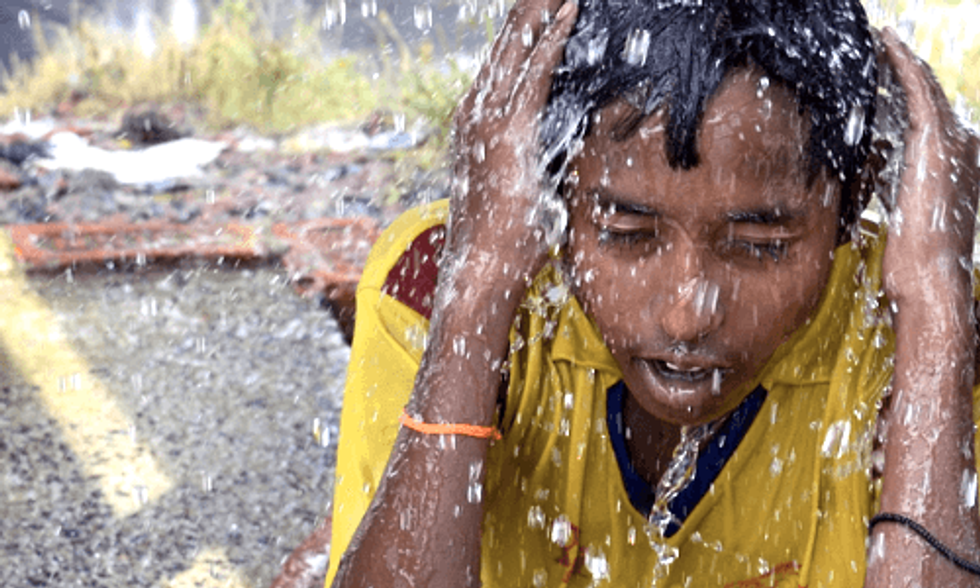 Need proof that we're having the hottest year on record? Scorching heat is searing parts of the world, sparking wildfires and claiming lives due to heat stroke and dehydration.

A young boy in Calcutta, India keeps himself cool amid a relentless heat wave that has killed thousands of people in his country.
Photo Credit: Saikat Paul / Shutterstock.com

1. India. The relentless heat since mid-April has claimed about 2,330 lives, overwhelming hospitals and devastating the country. As we previously reported, officials have blamed the heat on global warming.

“It’s not just another unusually hot summer—it is climate change," said Dr. Harsh Vardhan, India’s Minister of Science and Technology and Earth Sciences. “Let us not fool ourselves that there is no connection between the unusual number of deaths from the ongoing heatwave and the certainty of another failed monsoon.”

2. Pakistan. India's neighboring country is also suffering from the horrible heat, with the city of Karachi experiencing temperatures of 113 degrees Fahrenheit (45 degrees Celsius). According to BBC News, the weather has led to the deaths of nearly 700 people, mostly poor and elderly.

Making matters worse, with Pakistanis observing the holy month of Ramadan and fasting during daylight hours, an increased use of electricity for air conditioning has caused outages on their already-unstable grid.

3. The U.S. Southeast. Over on our shores, temperatures in the American South are about 5-15 degrees higher than usual with temperatures ranging between 100 and 115 degrees Fahrenheit, AccuWeather noted. Southerners, especially in southern Georgia and Florida, are also sweltering in the extreme humidity (in the upper 60s and 70s), making it feel even hotter, Weather.com reported.

A dangerous heat wave will persist across the South this week. http://t.co/F8yA3t07Hf pic.twitter.com/9fQ1W6wu63

Those on the West Coast should also brace for extreme heat and wildfires later this month, due to a shift in the jet stream pattern.

4. Alaska. Not only are glaciers rapidly melting, the northernmost U.S. state experienced record heat at the end of May where parts of Alaska recorded temperatures higher than in Arizona.

Unseasonably high temperatures, unpredictable winds and low humidity have been the perfect storm for wildfires to break out in the state, and as of last Sunday, more than 100 new fires have ignited across the state.

#RedCross is responding to #AKfire & severe weather across the country. See the latest update: http://t.co/JxyVtLixQw pic.twitter.com/0c9i5aWR2d

5. Israel. Temperatures recently reached 113 degrees Fahrenheit (45 degrees Celsius) in some parts of the country, causing fires to break out.

In the photo below, animals kept in Israeli zoos are being fed frozen treats to help cool off.

Last month, a 20-year-old tourist from Florida died after taking a fall while hiking the desert fortress of Masada on one of the hottest days of the year. The scary part? According to the Associated Press, she didn't die from injuries from the fall, but from dehydration.

6. Japan. The East Asian country has been shattering their temperature records. According to the Weather Channel, in the city of Otsu in Hokkaido, its April high of 89.4 degrees Fahrenheit (31.9 degrees Celsius) smashed the usual high of 50.9 degrees Fahrenheit (10.5 degrees Celsius). And just this month, roughly 780 people across the country were admitted into hospitals due to a heat wave, Sputnik reported. So far, two people have been reported dead due to the heat.

While the current rainfall must be a welcome reprieve, several prefectures have issued warnings of possible landslides and flooding, according to Sputnik.