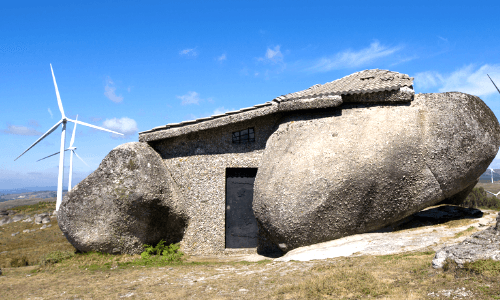 On a roof, shoved between giant boulders or in the middle of nowhere, these amazing homes around the world show that when it comes to finding a place to live, one size does not fit all. 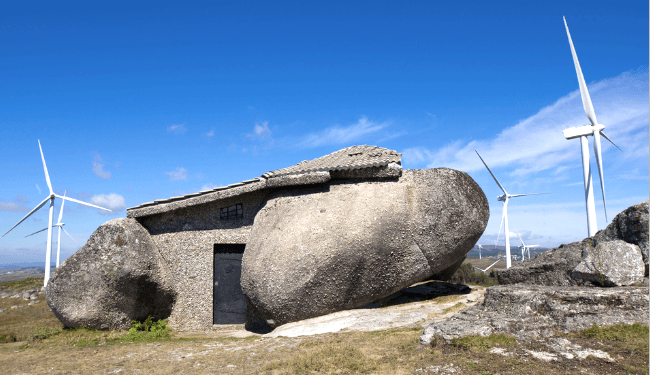 This house with an impressive view of wind turbines is made of stone and sits on the top of a mountain in Portugal.

A dream getaway for any overworked New Yorker, who still wants views of the Empire State Building. This East 13th Street penthouse is the perfect escape from the crowded, fast-paced streets of the Big Apple. If you check out some aerial views of the home on this slideshow, you’ll see that occupants don’t only get a lovely little home, but practically an entire meadow. Oh, and it can be yours if you have a cool $4.4 million lying around.

Look very carefully between the two buildings and you’ll see the Keret House, a home that’s 92 centimeters in its narrowest point ­and 152 centimeters in its ­widest point (that’s between 3 to 5 feet) and has been deemed the world’s narrowest house. Designed by architect Jakub Szczesny, the building contains one bedroom, a kitchen, a bathroom and a living area. A tenant would use a ladder to get to different floors. You can actually visit the house, too.

The world’s skinniest building is in this country: http://t.co/mBInki3VlV pic.twitter.com/n15asj3Jyz” #architecture #home

Would you live in the world’s skinniest house? #realestate http://t.co/ppPCvNtSZt pic.twitter.com/IVWATz72iO

3. This capsule that lets you live Off-Grid, Anywhere

Designed by Bratislava-based Nice Architects, the egg-shaped Ecocapsule allows for true freedom, as it’s powered purely by wind, solar and battery and also collects rain water. The home also contains a kitchenette with running water, a toilet and a hot shower. Weighing a mere 1,500 kilograms (about 3,300 pounds), it’s so small it can fit into a standard shipping container, which keeps shipping costs low. According to the company’s FAQ, designers of the pod have finished a functional prototype and is currently preparing for production. Pre-orders will start in the last quarter of 2015 with delivery in the first half of 2016.

and here it is @EcocapsuleSk aka #ecocapsule in its natural habitat pic.twitter.com/BunDYbtY3H