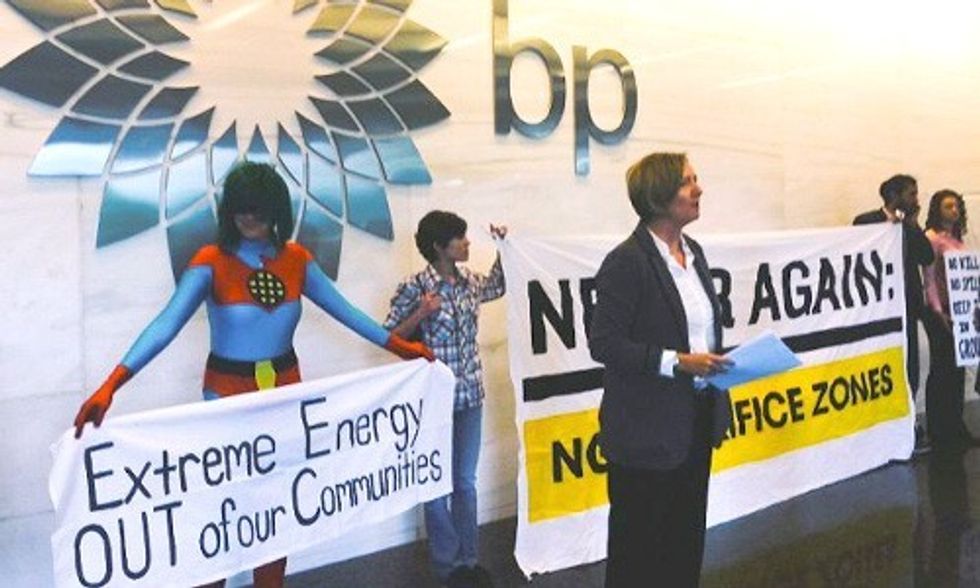 On April 20, 2010 BP's offshore oil drilling rig Deepwater Horizon in the Gulf of Mexico exploded, killing 11 workers, causing the largest oil spill ever in U.S. waters and the worst environmental disaster in U.S. history. It impacted wildlife and people, caused health problems from exposure to oil and dispersants, and decimated oyster, shellfish and finfish populations and damaged livelihoods and economies in towns dependent on fisheries. Five years later, much oil remains in the Gulf, but no one is sure how much. BP has fought in court to minimize its responsibility.

Today activists occupied BP headquarters in Houston to bring attention to the five year anniversary of the BP oil spill.

Kicking off a week of events marking the fifth anniversary of that event—with the damage to the environment and the ecosystem of the Gulf region still being added up—activists occupied BP headquarters in Houston. They carried signs with messages such as "Never Again: No Sacrifice Zone," "Extreme Energy Out of Our Communities," "No Kill, No Spill, Keep It in the Ground" and "BP Lies." As Gulf Coast residents stood in the lobby of the building and read a list of questions for BP, such as "Why is BP continuing to fight clean-up efforts in court?," security and police moved in and arrested six of the protesters.

Anne Rolfes, founding director of the grassroots environmental nonprofit the Louisiana Bucket Bridge, was one of those arrested.

“The BP Disaster shows that the oil industry isn't capable of preventing or cleaning up a catastrophe like BP," she said. "Let the disaster in the Gulf of Mexico be a cautionary tale: we should not drill in the Arctic. We should not drill off the Atlantic coast. In Louisiana, our oysters are dying, our fishermen are out of work. BP has killed our livelihood and our culture but instead of taking responsibility for that harm, the best they can do is churn out glossy PR photos of white sand and blue water.”

Another of the activists arrested, Cherri Foytlin of coastal southern Louisiana, said, "BP has used false advertising to sell the public a lie. The truth is many have fallen ill due to BP's heavy use of toxic chemicals. Our dolphins and turtles are still dying at unprecedented rates. Our fisheries still struggle to recover. Our hard-working, fishing families still suffer economic losses as BP has done everything possible to dodge their responsibilities to a settlement that they helped to write. Little has changed to protect the life and health of workers on the rigs."

"And BP's oil is still out there on the sea floor," she continued. "Their oil invades our shores to this day. The truth is that the oil is still here, and so are we. We, like the Earth herself, have a right to live. We have a right to thrive. Anyone who keeps us from that is an enemy to us. This is our battle. This is everyone's battle. And we will not yield.”

Events are planned all over the Gulf region to commemorate the Deepwater Horizon oil spill. Image credit: Gulf South Rising

The protest is only one of the ways activists are calling attention to the Deepwater Horizon disaster. Gulf South Rising's Week of Action from April 15-22 includes events all over the Gulf region, including Texas, Louisiana and Mississippi.

They include "Come Fish Off My Boat," launching in Bay St. Louis, Mississippi and traveling to fishing towns around the Gulf all week. "Come Fish Off My Boat is an open invitation to local, state and federal decision makers, as well as, to members of the media to spend a day fishing with Gulf Coast fisher-folk who were affected by the BP Deep Water Drilling Disaster of 2010," says the group.

A protest on San Padre Island against the proposed construction of five liquified natural gas export terminals was planned to coincide with Deepwater Horizon's fifth anniversary. "Fossil fuel companies are bad for coastal communities, and we want to show them that they are not welcome here," say the organizers. "We are not willing to sacrifice our clean air, clean water and biodiverse wildlife habitats for corporate profits."

Other events are also honoring that anniversary. The 7th annual New Orleans Earth Day Festival & Solar Derby says, "This year Earth Day will be the 5th anniversary of the 2010 BP Disaster. What better way to remember the catastrophe than renew our commitments to renewable energy?" And also in New Orleans, the For The Gulf film screening and concert at the Howlin' Wolf honors the clean-up workers, fisherman and families of those who were on Deepwater Horizon.

On Monday April 20, there's an "interfaith memorial and jazz funeral procession for the Gulf of Mexico’s losses due to the BP oil disaster...humans, creatures, livelihoods and....truth." Whether the procession will be met by a wall of security in light of the earlier arrests remains to be seen.

"In Louisiana our oysters are dying, our fishermen are out of work. BP killed our livelihoods and our culture" #PayUpBP #BPlies @BP_America

A demonstration is also being planned outside the annual BP shareholder meeting in London April 16.

Meanwhile, others are reminding us of the lessons to be learned from the disaster, warning against expanding offshore oil drilling elsewhere. Rachel Roberson of Environment America′s Stop Drilling program cautioned against the Obama administration's plan to open the Atlantic Coast to drilling.

“Our precious coasts and wildlife must be protected from the kinds of environmental and economic tragedy the BP blowout brought to the Gulf of Mexico,” said Richardson. “That’s why we’re calling on the administration to rescind their dangerous drilling plan.”

“As we learned from the BP disaster, offshore oil spills don’t respect state boundaries," said Senator Edward Markey of Massachusetts. "Drilling anywhere in the Atlantic would threaten the Massachusetts and New England economies and environment with the possibility of a devastating spill. Congress needs to act to turn the lessons from the BP spill into laws to ensure that we never experience a similar disaster again."