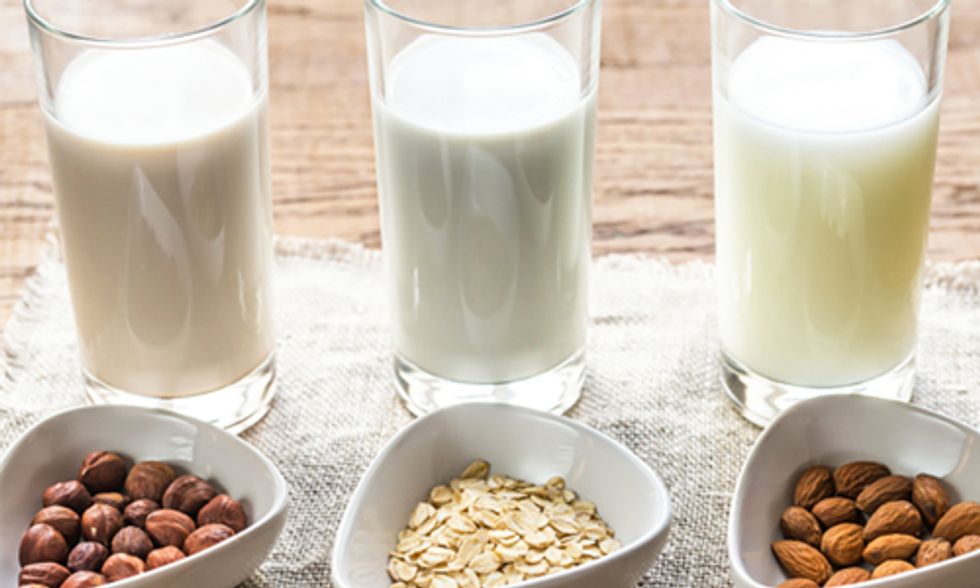 A glass of milk for strong bones. Milk with cookies or morning cereal. Everyone loves milk, right? Not quite. Animal-derived milk does have its downside. These include allergies and lactose intolerance, possibly even the risk of certain cancers and diabetes.

The good news is that those who want or need to stay away from cow's milk can do so with a number of non-dairy milk alternatives. These vary in their levels of nutrition, color, flavor and texture.

A popular alternative to dairy milk, soy milk is a bean extract of soybeans and commonly sold in sweetened, unsweetened and flavored varieties, including chocolate and vanilla.

Pros: In many ways, soy milk is nutritionally equivalent to cow's milk. It's often fortified with calcium, vitamins A and D and riboflavin and it usually includes 8 to 10 grams of protein per serving. Soy milk can also contain isoflavones, which have been associated with a reduced risk of heart disease.

Cons: Even a little soy milk can cause severe allergic reactions to those with a soy allergy. In addition, a review published in 2014 in Alternative Therapies in Health and Medicine revealed that soy might negatively impact fertility in men.

Made from ground almonds, water and (in most cases) sweetener, almond milk is sweet with a creamy texture similar to dairy milk.

Pros: Almond milk contains lots of vitamin E—about 50 percent of the daily value in one cup. Weight watchers will like the fact that almond milk has 1/3 of the calories of 2 percent cow's milk.

Cons: Almond milk has far less protein than dairy milk or soy milk. It also doesn't have the vitamins, minerals and fatty acids found in dairy milk, so it's important to look for fortified almond milk.

Made from boiled rice, brown rice syrup and brown rice starch, rice milk is a popular alternative for cow's milk.

Pros: Rice milk is the most hypoallergenic of the milk alternatives. It's free of soy, gluten and nuts, important for those who are allergic or can't tolerate these ingredients.

Cons: If you're watching your weight, rice milk is high in carbohydrates. And it's low in protein and calcium compared to dairy milk. This milk is also thin and watery, so it's not a good cow's milk substitute for cooking or baking.

A close alternative to cow's milk, coconut milk most resembles the texture of whole dairy milk. It's somewhat high in fat (about 5 grams of saturated fat per cup).

Pros: Its nutty flavor makes coconut milk suitable for many types of baked foods. It's soy- and gluten-free, so those with multiple food allergies can tolerate this substitute. Coconut milk has far more potassium per cup than dairy milk (630 mg per cup, vs. 150 mg).

A little thin and sweet, most flax milk is produced by organic, ethically responsible companies that use non-GMO flax.

Pros: High in fiber, flax milk is rich in alpha linoleic acids, which has been used to prevent and treat diseases of the heart and blood vessels. It is used to prevent heart attacks, lower high blood pressure, lower cholesterol and reverse hardening of the blood vessels. When fortified, this non-dairy alternative has as much calcium as regular milk, so it's good for those who need healthy, adequate levels of calcium.

Cons: Flax milk is low in protein. Flavored varieties tend to be heavily sweetened, so read the label for sugar content.

No, you won't get high on hemp milk. Made from hulled hemp seeds, water and (in most cases) sweeteners, hemp milk is a good alternative for those allergic to soy, nuts and gluten.

Cons: Unless fortified, hemp milk is relatively low in calcium. It's rather expensive and can have a beany-nutty flavor that may not suit some taste buds. Many store bought varieties have sugar added, so read the label.