6,000 Acres of Old Growth Forests Slated for Logging, the Largest Sale in Decades 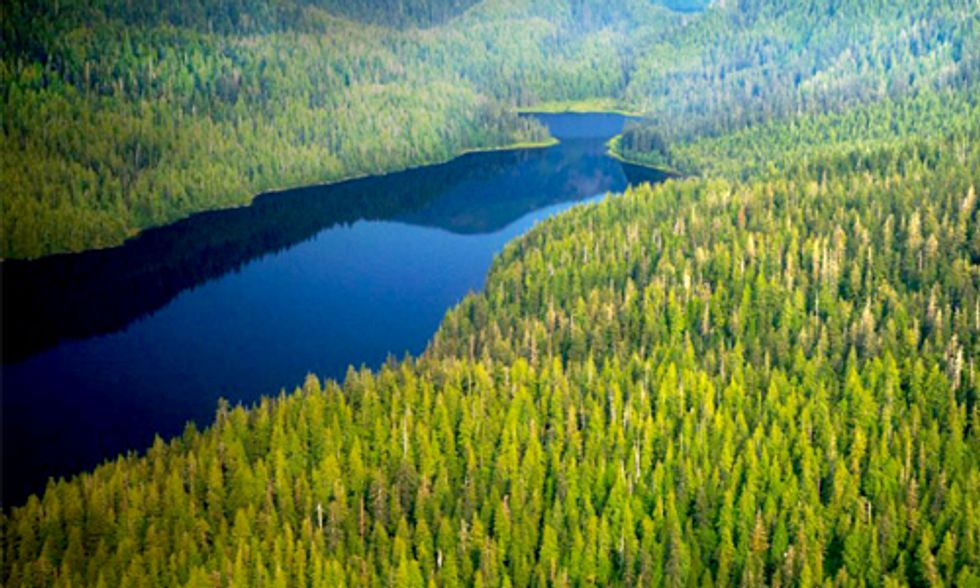 The Big Thorne sale is by far the largest Tongass old growth sale in decades. The conservation groups argue that it undercuts the region’s $2 billion fishing and tourism industries while continuing an unsustainable log export industry. The groups are also concerned about damage to vital habitat for salmon, bears, Sitka black-tailed deer, goshawks and the Alexander Archipelago wolf, and impacts to sport and subsistence hunters as well as recreational use of the forest.

The Big Thorne sale would clearcut more than 6,000 acres of old-growth rainforest on Prince of Wales Island. Though the Forest Service estimates the sale would cost taxpayers $13 million, the economics of recent sales indicate taxpayer costs could eventually climb over $100 million. The Forest Service has been widely criticized for offering old-growth sales at an economic loss to American taxpayers and its Tongass timber program is currently under review by the federal General Accounting Office. Timber makes up less than 1 percent of economic activity in Southeast Alaska.

By contrast, economic reports value Southeast Alaska’s fishing and tourism industries at a combined $2 billion annually. Some reports suggest road building and industrial activity associated with Big Thorne would harm fish habitat and is inadequately analyzed by the Forest Service. Wild coho runs, an economic staple for the region’s troll fleet, are particularly sensitive to habitat impacts to headwater streams.

While concerns have been raised that the Big Thorne sale is vital to a local mill, the groups presented evidence to the court of ample timber supply from State of Alaska timber sales as well as existing sales under contract to maintain operations. Additionally, in seeking to halt the old growth sale, the groups exempted the project’s second-growth and stewardship components.

The separate suit over the management plan challenges its failure to ensure that adequate old growth is left after timber sales for stable populations of wildlife—including Sitka black-tailed deer. It also alleges that the Forest Service failed, when adopting the plan, to give the public an accurate picture of how plan implementation would affect wildlife and those – like subsistence hunters—who rely on healthy wildlife populations.

“We’re looking for a solution that keeps jobs in the woods without sacrificing key habitat for deer, bear, wolf and salmon. We support projects that will be compatible with the region’s fishing and tourism industries—as well as deer hunting opportunities—over the long run,” said SEACC executive director Malena Marvin. “For years, SEACC has worked with regional partners to advocate micro sales, develop community-scale forest projects that support local businesses, and promote the region’s small sawmills,” she continued. “Our organization remains opposed to industrial-scale clearcuts that rely on exports—curtailing the export of round logs to Asia would increase jobs per log cut on the Tongass while eliminating massive, controversial old-growth sales.

“Economic prosperity in Southeast Alaska depends on vibrant, healthy old growth forests to support the economic drivers of our region—world-class fishing, hunting, recreation, and tourism,” said Holly Harris, staff attorney with Earthjustice.  “While Southeast Alaska loses thousands of acres of irreplaceable old growth habitat in sales like Big Thorne, taxpayers are paying tens of millions of dollars a year to prop up the old growth timber industry. The Forest Service’s tired reliance on these kinds of massive, subsidized old growth sales devastates the environment and jeopardizes the future of our region.”

“Allowing massive sales like Big Thorne is yet another blow to the Tongass National Forest and southeast Alaska,” said Kristen Miller, Conservation Director at Alaska Wilderness League. “Continuing to subsidize sales like Big Thorne threatens the viability of the wildlife and scenery that bring one million people to hike, hunt, fish, kayak and tour the Tongass each year. Southeast Alaska’s economy has moved on from timber. Instead of continuing to pour money into massive old growth giveaways like Big Thorne, why not put taxpayer dollars where they will give us the largest return on our investment year after year, and allow us to preserve a national treasure in the process.”

"It's clear that the Big Thorne sale is not the best path forward for taxpayers, for local communities, or for wildlife," said Alli Harvey, Alaska Representative for Sierra Club's Our Wild America campaign. "We should be safeguarding this amazing rainforest and its old growth trees, not clear-cutting the future."

“The Big Thorne timber sale is bad for wildlife, birds, fish and the people who care about them,” said Jim Adams, Audubon Alaska’s Policy Director. “The science tells us it is long-past time for the Forest Service to transition away from large-scale old-growth timber sales on the Tongass.”

68 Elephants Massacred in Democratic Republic of Congo in Past 60 Days, Is Extinction Only Decades Away?