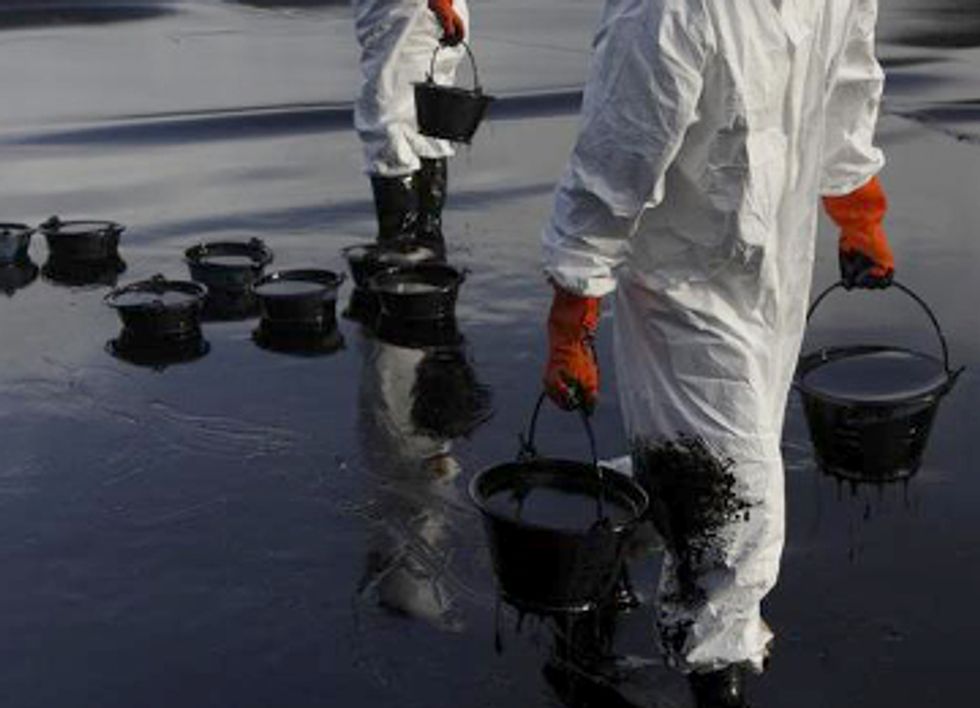 The tiny island of Koh Samet is about 2 km off the coast of the Thai mainland. It has the long pale beaches, forests and beautiful geography. Right now, though, the fine, white sands of the island and clear, blue waters that surround it are being turned sticky and black by crude oil which spurted out of a pipeline operated by PTT Global Chemical.

The spill started on Saturday morning, about 20 kilometres southeast of the Map Ta Phut seaport on the southern shore of the mainland. PTT, the state-owned administrator of PTT Global Chemical, tried to downplay the full extent of the leak by claiming that the oil slick had "effectively been dissolved".

This claim proved to be untrue after unrefined crude started blackening the immaculate beaches of Koh Samet as PTT Global Chemical admitted 50,000 litres of unrefined crude had been spilled into the waters of Phrao Bay.

Clean up continues in Thailand after crude oil spilled from a PTT Global Chemical pipeline.

Making matters worse, Thailand is not capable of handling the oil spill, Deputy Premier Plodprasop Suraswadi conceded to the Bangkok Post. Speaking via a government spokesman, he added that authorities should seek help from nearby Singapore.

For a region identified by Greenpeace Southeast Asia Thailand Programme Manager, Ply Pirom, as the "nation’s food basket", this news is bleak.

Bleaker still is the realization that this spill is just one of more than 200 spills that have happened in Thai waters in the past three decades, effectively putting the region's ecosystem in the crossfire of big oil companies and meager oil spill mitigation resources.

Black oil in pails collected from the shore that spilled through Ao Phrao beach in Ko Samed, Rayong Province.

Greenpeace East Asia has been closely monitoring the situation and have deployed a rapid response team to document the impact of the spill, particularly in the National Marine Park area that includes Koh Samet.

The paradox of a country known for its staggering natural beauty but still heavily reliant on fossil fuels in its energy policy is counter-intuitive. Especially when the availability of affordable, clean, renewable energy is taken into consideration.

Greenpeace is now demanding that PTT Global Chemical be held financially liable for the cost of cleaning and restoring the natural environment and is mobilizing the public through an online petition. It's time for the Thai government to review its energy policy and put an end to oil drilling and exploration in the Gulf of Thailand.