50 of the World’s Largest Cities Ranked by People, Planet, Profit 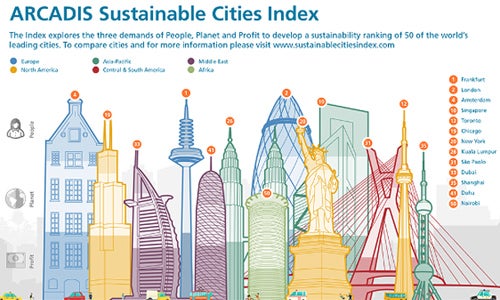 Global design and consultancy firm Arcadis released its Sustainable Cities Index this week, ranking 50 of the world’s largest cities in terms of their effectiveness at juggling the demands of “people, planet and profit.” Those categories look at social, environmental and economic factors. 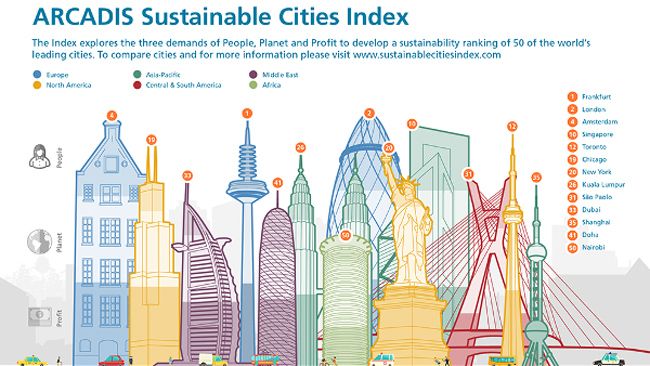 “Our world is changing at a faster pace than ever before,” said John Batten, global cities director at Arcadis. “Developing technology, population growth and the emergence of a truly global economy mean that the notion of national borders is becoming less relevant. Instead, we see the concept of the ‘global city’ taking hold. The Sustainable Cities Index highlights the areas of opportunity for cities, to inform decision-making and hopefully make them more sustainable economically, environmentally and for the welfare of their inhabitants.”

As is typical in such indexes, Europe leads the way. It held all five of the top slots on the overall list, seven of the top 10 and 11 of the top 20. The other three of the top 20 were in Asia.

Frankfort led the overall list, coming in first on the planet and profit lists, and ninth in people. The study cited Frankfort and the number two city on the planet list, Berlin, for low air pollution and excellent waste management.

Frankfort was followed in the top 10 by London, Copenhagen, Amsterdam, Rotterdam, Berlin, Seoul, Hong Kong, Madrid and Singapore. The first U.S. city to make the list is Boston, coming in at 15. Chicago is number 19 and New York rounds out the top 20.

Eight of the top 1o cities on the “planet” list are in Europe, with only Singapore (7) and Toronto (9) coming from elsewhere in the world, showing that region’s leadership on the climate and environmental issues.

“City leaders need to find ways to balance the demands of generating strong financial returns, being an attractive place for people to live and work in, whilst also limiting their damage to the environment,” said Batten. “To truly understand how sustainable a city is, we must understand how it ranks in People, Planet and Profit. Only then can city leaders act to assess their priorities, and the pathway to urban sustainability—for the good of all.”

What Makes a City Great?