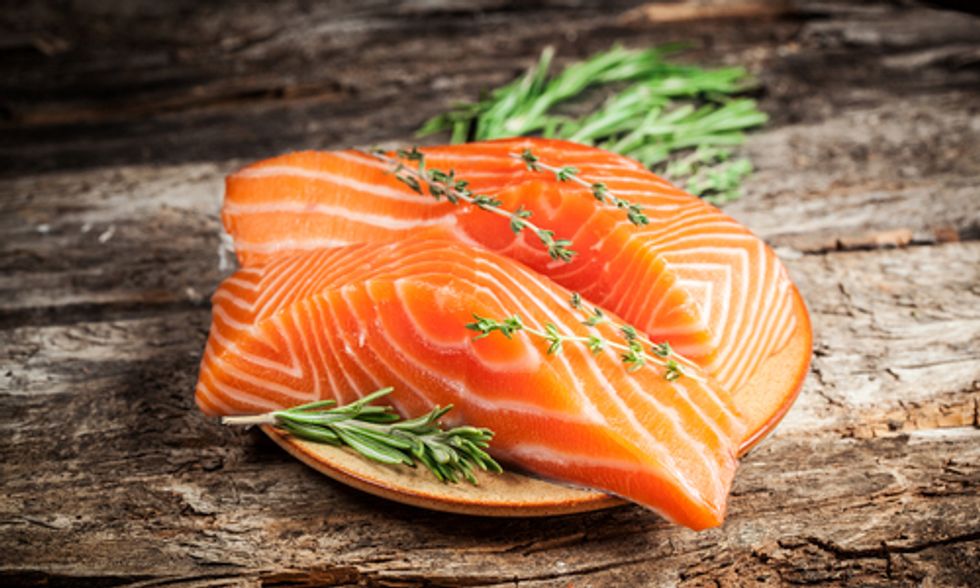 It's time to eat fish in a sustainable way if we hope to continue eating fish in the future.

Although wild salmon sounds more natural, it also costs more because “the supply has been devastated.
Photo credit: Shutterstock

A recent op-ed in the New York Times by Jane Brody says it's time for us to "relearn" the way we eat seafood. America's fish consumption habits are simply not sustainable. Along with ensuring your fish is fresh, Brody cautions it’s more important than ever to eat fish that is sustainable and sourced from a fish farm. Here are five essential practices to follow.

1. Watch Your Shrimp: Half of imported shrimp comes from Asia. Not only does Brody warn of “bacterial and viral infections” swarming Asian shrimp farms, but a recent investigation by the Guardian revealed a long history of participation in slave labor in Thailand’s shrimp processing chain. Charoen Pokphand (CP) Foods was found to purchase fish meal from fish boats manned with slave labor.

Thai authorities told the Guardian they condemned human trafficking; meanwhile, some of the largest supermarkets like Walmart, Carrefour, Costco and Tesco are investigating the suppliers. In addition to these problems, when a shrimp farming site becomes unusable, Brody writes that “shrimp farmers simply move on, destroying more miles of mangrove along the shore and wrecking habitats for all manner of wildlife, including spawning fish.”

2. Wild Fish Won’t Meet Demand: Paul Greenberg, author of American Catch: The Fight for Our Local Seafood tells Brody that beginning the process of eating our seafood from a sustainable, environmentally friendly fish farm would help fulfill the world’s need for fish. Already, nearly 86 percent of seafood consumed in the U.S, is imported. But consumers who turn to salmon for their omega-3 vitamins will not be so fortunate without farmed fish—nearly 170 billion pounds of wild fish are taken from our oceans, rivers and lakes. Greenberg notes that if everyone ate two servings of fish a week, another “60 billion pounds would be needed to meet the demand.”

3. Buy Farmed, Not Wild Fish: Although wild salmon sounds more natural, it also costs more (at least 50 percent more) because “the supply has been devastated,” writes Brody. Greenberg adds that farmed salmon is not as bad as some think, pointing to the argument that some believe farmed salmon could affect the wild salmon gene pool. In reality, most farmed salmon comes from Chile where “there are no wild salmon,” writes Brody. “There is little chance that those farmed fish will cross the Equator and mingle genetically with our wild stock.”

4. Step Outside the Salmon Box: The aversion to shellfish could be doing more harm than good for other fish. It’s time to step outside the usual salmon menu to make sure overfishing one species doesn’t continue. “Other species have all but disappeared from seafood counters and restaurant menus,” Brody writes, adding that “stocks of cod have declined so much from overfishing that many Northeastern fisheries were forced to shut down before the entire species disappeared.”

She asks: “Where is the orange roughy that was all the rage a decade ago? When was abalone last on a regular seafood menu?” Her suggestion: try mackerel, bluefish, herring or anchovies instead of salmon. To replace shrimp, try mussels that contain an excellent source of omega-3 fatty acids and are low in cholesterol. Squid and lobster, however, are fairly high in cholesterol.

5. Fish Is Still Good For You: Don’t leave fish off the table. Oily fish including bluefish and sardines are high in polyunsaturated fatty acids. Numerous studies of fish’s benefits also prove that fish should appear on any dinner menu. Fish consumption is both related to a “reduced risk of strokes” and in one study, a lower risk of heart attack and death, reports Brody.

Mercury in Seafood: How Much Is Too Much?