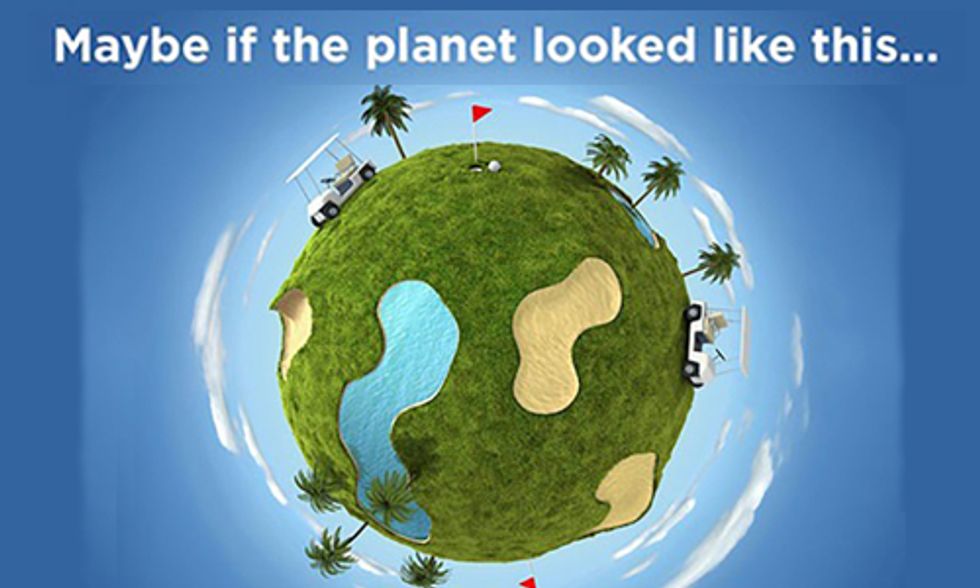 Here's what you actually need to know about Trump's environment and energy agenda in five minutes or less.

1. Not only has Donald Trump failed to propose a plan to address climate change — he won't even admit that it's happening.

You might think these are good words to describe Trump's campaign. No — they're his take on the climate crisis.

Temperatures are rising and continue to rise. Check this out:

The latest report from the United Nations states unequivocally that human influence on the climate system is already affecting all continents — reducing grain yields, producing life-threatening water shortages and severe storms and costing human lives. The report says, “We have little time before the window of opportunity to stay within 2 C of warming closes."

And already climate change is taking a toll.

Trump's plan? Deny that it is happening.

Trump told Reuters: “At a minimum I will be renegotiating those agreements, at a minimum. And at a maximum I may do something else."

President Obama and other global leaders did something remarkable — they brought nearly the entire world together to agree to meet our climate challenge. Trump is proposing we negotiate away American global leadership. What he said is ridiculous and would do irreparable damage to our role in the world.

3. Donald Trump says he wants to bring back coal, the world's dirtiest fuel.

Coal is the world's dirtiest energy source, from mining to burning to disposing of coal waste. Currently, 233 U.S. coal plants have been retired or are set for retirement.

And the largest U.S. coal company just filed for bankruptcy. One of 50 coal-industry bankruptcies since 2012.

“While two years of crashing prices for oil, natural gas and coal triggered dramatic downsizing in those industries, renewables have been thriving. Clean energy investment broke new records in 2015 and is now seeing twice as much global funding as fossil fuels."

And fewer and fewer Americans are relying on coal for their energy needs.

As cleaner, cheaper, more reliable renewable energy sources surge, coal's economics simply no longer work. Now is the time to support a just transition for coal workers by investing in helping them become part of the clean energy economy — not by returning to a dirty fuel of the past.

Donald Trump: No, I'm not cutting services, but I'm cutting spending. But I may cut Department of Education … Environmental Protection, what they do is a disgrace. Every week they come out with new regulations.

Chris Wallace: Who is going to protect the environment?

Donald Trump: We'll be fine with the environment. We can leave a little bit.

Though the Sierra Club is grateful that Trump would “leave a little bit" of the environment, his proposal to cut the EPA is boneheaded.

The EPA keeps our air safe to breathe and our water safe to drink—and puts forth important safeguards for the health of our communities.

Trump cut down about 500 trees so that his Virginia golf course could have more than a “little glimpse" of the river. His New Jersey golf course has been cited for a “string of violations." One luxury development in Scotland left the local community without water for years.

Trump clearly cares more about the fate of his golf courses than the health of the millions of families affected by the climate crisis.

In fact, according to Politico, Trump is trying to build a seawall to protect one of his golf courses from “global warming and its effects" — even as he insists that climate change is a “hoax."

Trump's reckless and dangerous agenda on the environment is based more on reality TV than actual reality.

Trump is ignoring the climate crisis — and will do anything he can to dismantle government safeguards, even if clean air and water are put at risk. If elected, he would stop our progress in its tracks, take us backward and squander the economic opportunity that the transition to an economy powered by clean energy would bring.

2016 will be the most important presidential election yet — it will literally determine the future of our planet. So don't just sit there. Let's #StopTrump together.

Trump Building Wall in Ireland to Keep Climate Change Out