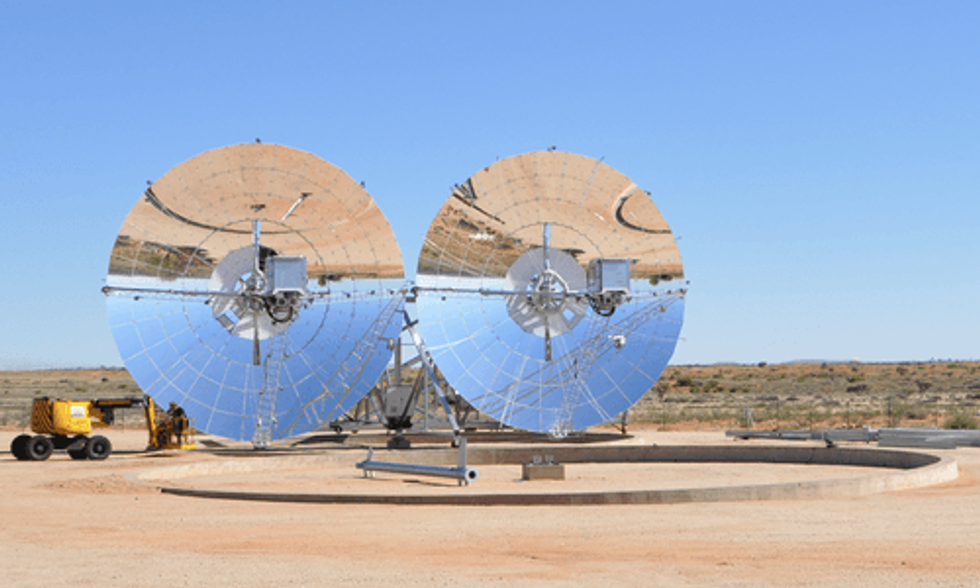 Solar power is lighting up the world, and not just on rooftops. Forward-thinking minds are discovering ways to harness the sun's energy in many exciting ways, from the ground beneath our feet to the shirt off our back. The following innovations are shining beacons in a renewable energy future.

These mirrored dishes, located in the Kalahari desert, could be the most efficient solar system in the world. Photo Credit: Ripasso Energy

Most solar generators can convert up to 23 percent of sunlight into electricity. However, Swedish company Ripasso Energy claims they can covert 34 percent of the sun's energy into power with their contraption (see photo above), making it the world's most efficient solar electricity system. According to The Guardian, independent tests found that a single Ripasso dish can generate 75 to 85 zero-emission megawatt hours of electricity a year, or enough to power 24 typical homes in the UK. To compare, to create the same amount of electricity by burning coal would release roughly 81 metric tonnes of CO2 into the atmosphere, the newspaper reported.

2. Battery technology and shared solar untether us from Big Power

Elon Musk really is Tony Stark. The billionaire entrepreneur recently unveiled a revolutionary suite of Tesla batteries that he says could "fundamentally change the way the world uses energy" and get us off dirty fossil fuels. Musk's sister company SolarCity is now offering Tesla batteries at a price point that’s more than 60 percent less than previous solar power storage products, paving the way for more people to peel themselves off the grid.

For people who don't have the funds or the right roof for photovoltaic panels, peer-to-peer solar startup Yeloha is offering a genius solution: solar sharing. The company allows customers to "go solar" without owning a single panel by essentially feeding off their neighbors who do (and at a price that’s less than what they’d normally pay to their utility).

For places recovering from disaster or communities lacking access to electricity, solar systems provide an alternative or a complement to traditional power sources such as fossil fuel generators (diesel or gasoline is not only expensive, it emits noxious fumes and can cause fires). For example, after the first of two devastating earthquakes struck Nepal, solar company Gham Power deployed solar power systems to help power lights and mobile charging stations for relief workers and the displaced. And in Haiti, the nonprofit organization Field Ready is trying to use a solar powered 3D-printer to make a whole range of simple, life-saving medical supplies at a fraction of the cost.

Scientists are solving the planet’s fresh water worries with a little help from the sun. Recently, a team from the Massachusetts Institute of Technology and Jain Irrigation Systems have come up with a method of turning brackish water into drinking water with a solar-powered machine that can pull salt out of water. It then further disinfects the water with ultraviolet rays. With parts of the planet running perilously low on fresh water, realization of this technology can’t come soon enough.

In the air and on the road, solar technology is going the distance. Currently, the Solar Impulse 2, the first solar airplane able to sustain flight at night with a pilot on board, is making its historic round-the-world trip powered only by the sun.

Over in the Netherlands, SolaRoad, the world’s first “solar road,” has defied expectations and has generated about 3,000 kWh of power, enough to provide a single-person household with electricity for a year. Considering it's only a 230-feet bike path, the potential for this technology could be big, kind of like photovoltaic technology itself.