5 Seismic Shifts Shaking Up World's Energy Use, According to Bloomberg's NEO 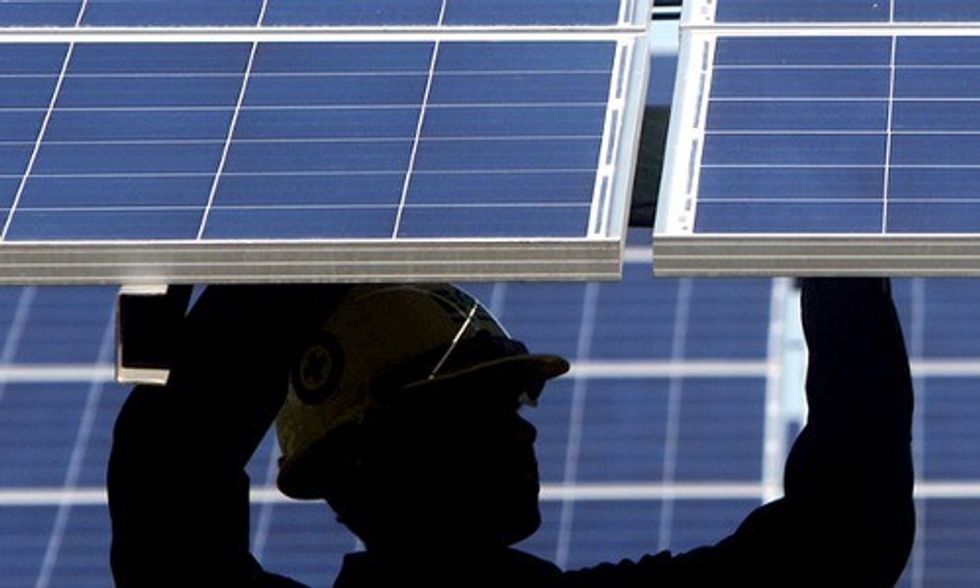 Renewable energy is set to blow past fossil fuels in the next 25 years, attracting nearly two-thirds of the spending on new power plants, according to a new report from Bloomberg New Energy Finance (BNEF). With rapidly decreasing costs, solar will be the top choice for consumers, particularly in developing nations, the report New Energy Outlook 2015 (NEO) projects. Worldwide, it expects solar to draw $3.7 trillion of the $8 trillion invested in clean energy, with only $4.1 billion spent on coal, natural gas and nuclear.

The report outlined what it referred to as "5 seismic shifts" that will transform electricity generation in the next quarter century.

1. Solar, solar everywhere. The continuing decline in the cost of photovoltaic technology will fuel that $3.7 billion investment surge in both large- and small-scale solar. That growth will be pushed by a 47 percent decrease in the cost of solar thanks to conversion efficiencies, new materials and streamlined production.

2. Power to the people. Of that amount, $2.2 billion will be invested in rooftop solar and other small-scale solar systems, allowing businesses and other users to generate and store their own electricity and giving parts of the developing world access to electricity for the first time.

3. Demand undershoots. Energy-efficient technologies in uses such as air conditioning and lighting will help decrease growth in global power demand from 3 percent to 1.8 percent a year.

4. Gas flares only briefly. Natural gas will not transition the world from coal, and coal-to-gas will be primarily a U.S phenomenon due to the explosion of fracking, but developing nations will combine coal and renewable energy.

5. Climate peril. Despite the increased investment in renewables, climate change will remain a threat, as enough older fossil-fuel power plants remain online and new coal-fired plants in developing nations cause carbon emissions to rise through 2029 and remain 14 percent above 2014 levels in 2040.

"Last year’s forecast from BNEF identified the big share that renewables would have in power investment—that raised eyebrows at the time, but other energy forecasters have since piped a similar tune," said BNEF Chief Executive Jon Moore. "This year’s report pushes our thinking further, with updated analysis on the slowing levels of demand we are already seeing, and on the proliferation of small PV systems."

"NEO 2015 draws together all of BNEF’s best data and information on energy costs, policy, technology and finance," added Michael Liebreich, chairman of the advisory board at BNEF. "It shows that we will see tremendous progress towards a decarbonized power system. However, it also shows that despite this, coal will continue to play a big part in world power, with emissions continuing to rise for another decade and a half, unless further radical policy action is taken.”

The BNEF finance report provides a country-by-country and technology-by-technology analysis of how the demand, generation costs and structural changes in the electricity system will evolve in the next 25 years. For instance, in Europe, it says that wind can already compete with coal and gas cost-wise at current carbon prices. But it will see renewables hit at ceiling of 75 percent if it does't invest in technologies such as storage.

It predicts an especially strong future for small-scale solar, with its ability to bring power to developing regions at low cost, decentralizing electricity generation. “Up to now, small-scale solar investment has been dominated by wealthy countries such as Germany, the U.S. and Japan," said Jenny Chase, chief solar analyst at BNEF. "By 2040, developing economies will have spent $1 trillion on small PV systems, in many cases bringing electricity for the first time to remote villages.” NEO 2015 projects that of the $12.2 trillion invested worldwide in power generation in the next 25 years, 78 percent will be in developing markets, with renewables making up two-thirds and the remaining third split between coal ($1.6 trillion), gas ($1.2 trillion) and nuclear ($1.3 trillion).

It also projected that in 2040, fossil fuels would still generate 44 percent of all power globally, down from 67 percent in 2014. For that reason, and because growing populations and emerging economies are increasing the demand for electricity, emissions will increase and peak in 2029 with more coal burning in developing countries offsetting the growth of renewables and the transition from coal to natural gas in developed countries like the U.S. But it found that even in the U.S., carbon emissions will only fall 22 percent over 2005 levels by 2030, rather than the U.S. Environmental Protection Agency's goal of 30 percent.

Electricity use will expand mainly in developing nations, but that demand can be met in large part by distributed solar. Source: Bloomberg New Energy Finance

"The CO2 content of the atmosphere is on course to exceed 450 parts per million by 2035 even if emissions stay constant, so the trend we show of rising emissions to 2029 makes it very unlikely that the world will be able to limit temperature increases to less than two degrees Centigrade," said the report's lead author Seb Henbest, head of Europe, Middle East and Africa for BNEF.

"The message for international negotiators preparing for the Paris climate change conference in December is that current policy settings—even combined with the vast strides renewables are making on competitiveness—will not be enough. Further policy action on emissions will be needed."