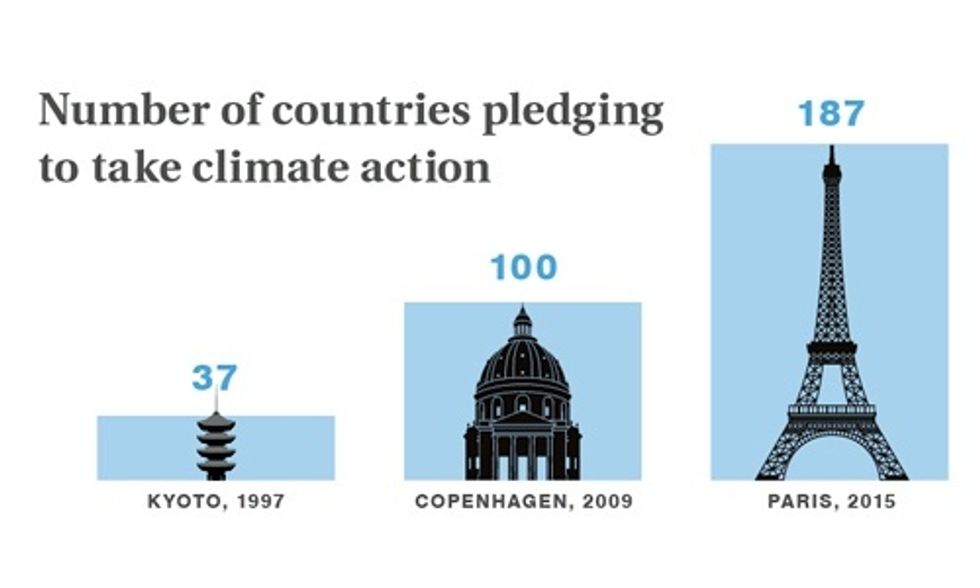 2015 was a breakthrough year for our environment—one of the most important in decades.

The nations of the world agreed to a climate deal that finally gives us a chance to turn the corner toward safety. America put in place the first-ever limits on carbon pollution from its largest source, power plants. And the Senate passed sweeping bipartisan legislation that promises to fix our chemical safety system, which has been broken for 40 years.

At Environmental Defense Fund, we’re proud to have played key roles in all of these breakthroughs.

Still, even with all that we accomplished, I expect 2016 to top the year now coming to an end. The twin drivers of progress in the next 12 months will be ambition and accountability—two mutually dependent qualities the environmental movement must have to thrive.

Ambition without accountability is just rhetoric and accountability without ambition is merely record keeping. Together, though, they are what made the recent Paris talks such a success and they are how we’ll ratchet up global action in the year ahead.

For the first time, the world got the message: Climate change is the race of our lives. And leaders responded with action on a global scale. In support of the latest Conference of the Parties or COP21, 187 countries covering almost 99 percent of global emissions submitted commitments to take action on climate.

The agreement reached in Paris doesn’t solve climate change, but it created a framework through which the world can take measurable, verifiable action to see emissions peak, stabilize and eventually decline. And it requires countries to track progress and increase ambition over time, further improving the odds that we can keep warming below catastrophic levels.

In other words, Paris is the starter’s gun.

2. Markets are Ramping Up

The Paris agreement sent a powerful, immediate signal to global markets that the clean energy future is open for business. It’s a message markets are primed to receive: emissions trading systems are already at work in more than 50 places that are home to nearly 1 billion people.

With the Paris framework in place, momentum for bottom-up, decentralized market-based policies will only increase—and at the core of such systems are transparency and integrity.

It’s a principle of economics that as participation grows, activity accelerates. As we reach economies of scale, new investment is drawn in and businesses come to depend on the new market tools.

3. Private Sector is Coming Onboard

The corporate world is ready to play a larger role, too.

More than 100 savvy businesses ran an ad in The Wall Street Journal just before the Paris talks, supporting action to reduce U.S. emissions that achieve or exceed national commitments “and increase ambition in the future.”

By pledging, these companies also invite us to hold them accountable.

Domestically and internationally, 2015 was a breakthrough year for clean and efficient energy and 2016 should see the amplification of smart policies and investments.

On the domestic front, the U.S. Department of Energy released a new standard to cut emissions from commercial air conditioners and furnaces. It’s expected to save more energy than any other standard the agency has issued so far.

The promise of clean energy is global and another critical piece of the Paris agreement is that it invites the developing world to participate in the rising flow of clean energy investments.

Emerging economies such as China and India are expected to spend $2.7 trillion on renewable energy between 2015 and 2040, far outpacing industrialized nations.

Now all nations, rich and poor, will be able to show that these investments pay off.

5. Market Solutions Grow on Land and at Sea

The “no net loss” habitat standards the Obama administration announced in late 2015 and is set to ramp up in 2016 and call for landscape-scale, market-based solutions that bring net benefits for wildlife on working lands.

At the same time, successes in the U.S. commercial fishing sector are expanding globally. Fishing rights management programs are transforming the industry, increasing prosperity in fishing communities and abundance in fish populations.

These two, ambitious initiatives are built on demonstrable results. Look for more progress in 2016 as they continue to expand.

While we’re making extraordinary environmental gains, there is, of course, still much to be done.

We need to continue to work with government and industry partners to identify and mitigate methane leaks from the oil and gas sector. We know it can be done at low cost and have tremendous impact.

We also need to ensure that a strong bill to reform the Toxic Substances Control Act emerges from the House-Senate negotiations and is signed into law. Americans deserve to know their everyday products are safe to use.

The era of delay is over. We must be ambitious and hold our public officials, our business leaders and ourselves accountable. We need smart, flexible solutions that can ratchet up environmental protection over time.