5 Realities of Climate Change in 2013 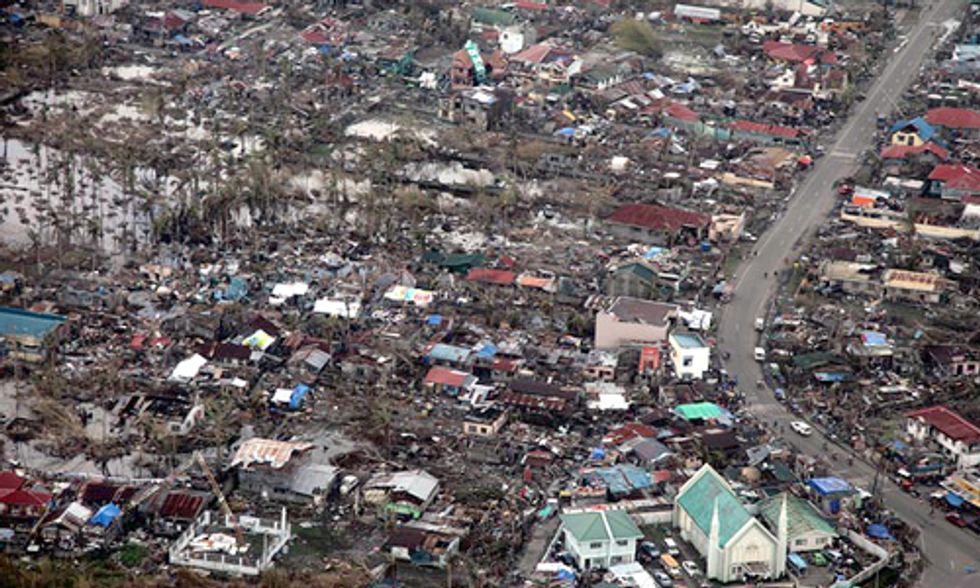 As the year draws to a close, we’re taking the opportunity to reflect on the last 12 months of the climate movement—the impacts, the activism and the action.

Looking back on 2013, we hope to better understand the complex landscape in which we are trying to build a safe and sustainable future, and where the climate movement stands as we move into a new year.

2013 was a year of extreme weather events, including the devastating Typhoon Haiyan, which hit the Philippines in November. Photo credit: Creative Commons /DFID

In May, scientists at the Mauna Loa observatory in Hawaii confirmed that concentrations of atmospheric carbon dioxide (CO2) had passed the ominous milestone of 400 parts per million (ppm)—concentrations not seen for more than 3 million years. According to experts, the last time our planet was exposed to equivalent levels of greenhouse gases, global temperatures were 3-4 degrees Celsius hotter and sea levels were 5-40 meters higher than today.

“It is symbolic, a point to pause and think about where we have been and where we are going,” said Professor Ralph Keeling from the Mauna Loa Observatory in Hawaii on this historic milestone. "It’s like turning 50. It’s a wake up to what has been building up in front of us all along.”

2. A Year of Extreme Weather

2013 was the seventh warmest year on record. As of November it also had the second highest number of billion-dollar weather disasters around the globe since accurate records begun in 2000.

China, Russia, Europe, North America, Indonesia and India were plagued with floods while China, Portugal, Hungary, Finland and the UK all experienced heat waves. In the Uttarakhand state of India, flooding left 5,700 lives presumed lost and many more devastated. At the other extreme, California’s Death Valley saw temperatures hit 54 degrees Celsius—the hottest temperature ever record on Earth in June—while Australia got so hot, the country’s heat map needed a new color added.

The Pacific saw some of its worst storms on record this year. In October, Cyclone Phallin carved a path of damage across India’s Odisha region—with storm surges reaching as high as 3.5 meters (11 feet). In November, it was the turn of the Philippines, when Typhoon Haiyan brought winds of 315 km/hr and gusts up to 380 km/hr. It was recognized as the strongest tropical cyclone to make landfall in modern history, and the storm’s death toll currently stands at more than 6,000.

This year has seen storm surges engulfing large parts of the low lying Marshall Islands and who villages in Fiji already being forced to relocate because of rising seas. This year has also seen a court case in New Zealand where an immigrant from the Pacific Island of Kiribati fought—and failed—for climate refugee status, arguing that sea level rises made it too dangerous to return home.

In its Turn Down the Heat report back in June, the World Bank painted a stark picture of our warming world. They warned that millions would be left trapped in poverty as temperatures rise, with two degree Celsius and four degrees Celsius of warming expected to put serious strain on agricultural production, water resources and coastal communities.

Other warnings this year include the threat of persistent flooding impacting development in Pakistan and climate change’s impact food production around the world—including in the UK and Ghana—and the potential for increased numbers of climate refugees in the Sahel region of Africa.

When Australia’s new government came to power in September, the first major act of the Prime Minister, Tony Abbott, was to scrap the Climate Commission—an independent climate research body. The government has also started to repeal the country’s carbon pricing laws, replacing it with a direct action plan, which experts say is uneconomical and could cause a rise in the country’s emissions.

Canada’s emissions continue to rise this year, as the country’s government blindly pursues the expansion of its tar sands industry, approving the construction of a highly controversial Enbridge Northern Gateway pipeline to export tar sands and conducting fierce lobbying tours to sell the industry to the U.S. and Europe.

Japan has also joined this year’s climate villains list as days into November’s UN climate talks, the government announced a change in its climate commitment which will see the country’s emissions rise three percent on 1990 levels by 2020—a big jump from their promised 25 percent cut.

In a much publicized saga, the Arctic 30—28 of who were Greenpeace activists—faced 15 years in a Russian prison after being faced with piracy this year, for protesting at a Gazprom drilling rig. The activists spent two months in jail before being given amnesty by the Russian parliament this week.

The Arctic 30 were finally granted amnesty this week after spending more than two months in jail for a peaceful action against Arctic oil drilling. Photo credit: Vladimir Baryshev /Greenpeace

U.S. activist Tim DeChristopher was released from jail after a twenty-one month prison term for disrupting a land auction which would have sold off leasing rights to oil and gas companies, while Australian activist Jonathan Moylan is facing jail time following a fake press release blamed for setbacks on the approval of the $776 million dollar Maules Creek coal mine.

And more and more activists are paying the ultimate price to give the world a better future, with reports showing the murder of environmentalists—particularly in the global south—is on the rise, and far too many deaths reported in 2013.

While this list offers a sobering reminder of how far we still have to go as a movement, 2013 has also been a year of great wins for the environmental movement and of positive shifts that show the issue is beginning to resonate with all sectors of society.

Do not despair yet, look for climate movement highlights of 2013 next.