5 Portlandia Eco-Skits You’ve Got to See 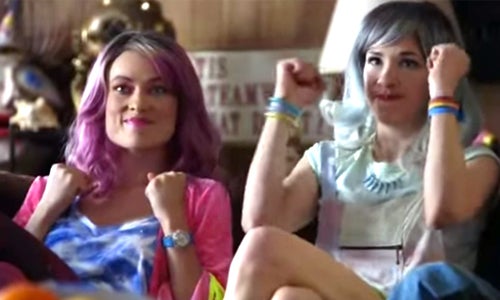 Portlandia, a sketch comedy show set and filmed in Portland, Oregon, loves to poke fun at the hipster and eco-conscious culture that Portland is so famous for. Carrie Brownstein and former Saturday Night Live cast member Fred Armisen, write, produce and act in this hilarious series. We recently featured the show’s parody on life inside a tiny house. The show has many hilarious eco-related segments. Here are the segments which I consider the all-time top five:

Olivia Wilde, Jeff Goldblum and Natasha Lyonne from Orange is the New Black guest star in this segment, in which a group of four wannabe activists attempt to protest SeaWorld in San Diego, which they settled on as their cause because it was warmer than going to Antarctica and less expensive than going to Hawaii. After a day of taking in the city sights (because hey, they were there), see how successful the gang is at Sea World.

A customer (Jack McBrayer, who played Kenneth on 30 Rock) at a natural foods store forgets his reusable bag and asks for a plastic or paper bag. The cashier says he doesn’t have any bags and is completely befuddled as to what to do. He has to call the manager for assistance. See how he and the manager handle the situation.

Two conscientious eaters are at a restaurant that features a locally-sourced “heritage breed, woodland raised chicken that’s been fed a diet of sheep’s milk, soy and hazelnuts.” (The skit inspired Food & Water Watch to do their own hilarious spoof). The couple grills the waitress for more information about the bird, so she brings back a brochure on the life of “Collin,” the chicken, replete with a picture. When they are still not fully satisfied, the couple decides to go to the farm to check it out.

You’ve heard of assertive drivers, but what about assertive bicyclists. A hard-core bicyclist takes to the streets in this hilarious little clip. As he makes his way around the city, he curses car drivers for their lack of consideration and their polluting ways. Wait to see how he is foiled in the end (hint: it’s not a car).

In a boardroom meeting, the head honcho commends the work of the marketing people behind the skyrocketing sales of heirloom tomatoes, kale and Brussels sprouts. Then, the boss turns to Marty (Steve Buscemi), the guy who has to market celery. His numbers have stagnated for some time. Everybody else has great ideas while Marty just flounders. Watch as Marty, who just wants people to like celery, gets unwittingly tied up in an intricate plot by the marketers of corn to undue bacon’s recent bonanza.

Captain Paul Watson: If I Were CEO of SeaWorld » EcoWatch