5 New Developments in the Killing of Cecil the Lion 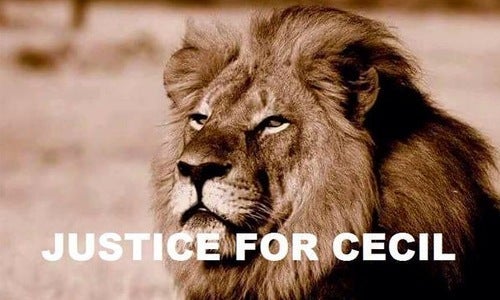 The Internet outrage over the killing of Cecil the Lion continued over the weekend. Last week, Walter Palmer, a dentist from Minnesota admitted to hunting and killing Cecil the Lion, the star attraction at Zimbabwe’s Hwange National Park.

The hunt took place at the beginning of July, but last week the Zimbabwean Conservation Task Force identified Palmer and two local Zimbabwean men as the responsible party. Many are now demanding that Palmer face prosecution. Here are 5 updates on the killing of Cecil:

1. Walter Palmer has gone into hiding

The backlash against him is so intense that Palmer has been laying low since news broke last week of his involvement. He closed his dental practice and could not be found at his home. Palmer finally contacted U.S. Fish and Wildlife Service officials on Thursday night who had been trying to reach him all last week to investigate the case.

On Friday, Zimbabwe’s environment minister called for the extradition of Palmer. The minister said “she understood the process was underway to have Dr. Palmer extradited from the United States and that the ‘foreign poacher’ needed to be held accountable for his actions,” reports The New York Times.