5 of the Most Nutritious Vegetables on the Planet 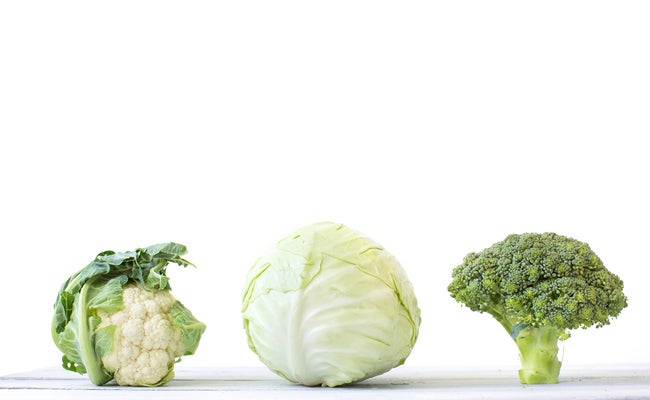 Kale, cabbage, broccoli, brussels sprouts and cauliflower may all look different, but they’re actually remarkably similar. These five veggies are all part of the Cruciferae family. We laymen commonly refer to them as cruciferous vegetables. In addition to being closely related, these five vegetables also have something else in common: They’re some of the most nutritious vegetables on the planet.

We’re not saying you shouldn’t ever deviate away from the cruciferous family, but really, these five vegetables can fulfill a lot of your nutritional needs. Here are a few of the health benefits of cruciferous vegetables and some advice on how you can best prepare them at home.

First off, few vegetables are packed with as many different nutrients as cruciferous vegetables. They’re rich in vitamins A, C and K, as well as the B-vitamin group, including the ever-important folic acid.

According to the University of Maryland Medical Center, vitamin A is super important for hair, skin and nail health, which makes cruciferous vegetables not only good for our bodies, but also our beauty routines. Vitamin A is also important for eyesight and is an important nutrient for pregnant and breastfeeding mothers.

Vitamin C, of course, strengthens the immune system and vitamin K is important for blood clotting function. Meanwhile, the hugely important nutrient folic acid (a B-group vitamin) is beneficial for healthy pregnancies. It’s so important, in fact, that the Center for Disease Control recommends that all women of childbearing age consume 400 micrograms of folic acid daily to prevent potential birth defects.

Phytonutrients are a group of nutrients that can only be found in plants, hence their title, phtyo- (Greek for “plant”) nutrients. The phytonutrient group glucosinolates is prevalent in cruciferous vegetables. In fact, according to World’s Healthiest Foods, we simply can’t get enough glucosinolates in our diet without consuming these kinds of veggies.

This is crucial because these phytonutrients play an important role in cancer prevention.

“Once converted into other molecules called isothiocyanates, the glucosinolates have an eye-opening track record in lowering the risk of certain cancers,” World’s Healthiest Foods states.

We already know that calcium is important for bone health, but did you know that you can actually get plenty of calcium from cruciferous vegetables such as broccoli and kale? They may actually be preferable to dairy as a calcium source, because they are absorbed better, are paired with vitamin K (important for calcium absorption) and don’t have the negative health effects of dairy.

Finally, like all plant foods, cruciferous vegetables contain tons of fiber, which is great for our bodies. Fiber moves through the digestive tract, clearing the intestines, promoting regular bowel movements and increasing nutrient absorption. In fact, adequate fiber intake may just be the most important component in a weight loss program, according to Harvard University Researchers.

How to Prepare Cruciferous Vegetables

When it comes to broccoli, kale, cauliflower, brussels sprouts and cabbage, the rawer you can eat your veggies, the better. World’s Healthiest Foods points out that the fresher your veggies are, the more likely they will be to have active enzymes, which contribute to vitamin and phytonutrient content.

To eat your broccoli raw, simply dip it in a tasty vegetable dip (ranch is a classic) and munch on it as a snack. You can also pick up raw broccoli cole slaw that makes for a great addition to salads.

Speaking of salads, use kale as one of your leafy greens in salad preparation. This will ensure you get the biggest bang for your buck in terms of nutrients. Cabbage is similar in its palatability on top of salads and in cole slaws.

Cauliflower and Brussels sprouts are difficult ones to eat raw due to their harder textures and bitter tastes. A great trick is to throw them in your food processor and grind them until they are a fine, grain-like texture. Then you can sprinkle them over salads or soups.

If none of these options sound appealing, don’t worry—eating your cruciferous vegetables cooked will still give you a healthy dose of important nutrients.