5 Inconvenient Truths You Need to Know Before Eating Lunch 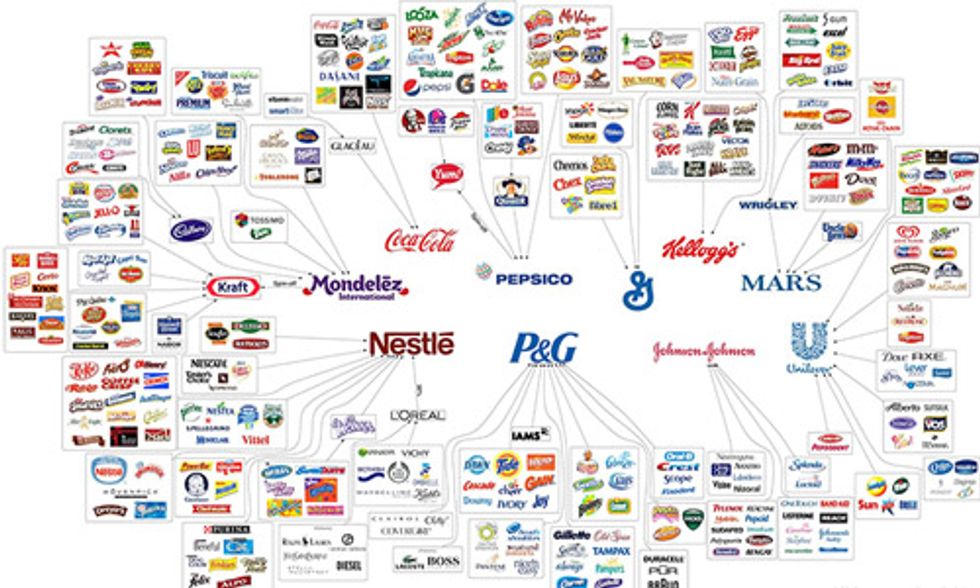 From mercury in tuna and wood pulp in parmesan cheese to ground beef treated with ammonia to retard E. coli (“pink slime”), the press does a good job exposing the dangerous and deceptive practices of Big Food. The problem is, the public forgets about the food risk or contamination, assuming that reform is in the works and that is just fine with Big Food. Often nothing changes.

For example, many thought the problem of mercury in tuna had been solved since it has been so widely reported. But Time recently wrote “the latest analysis shows that eating fish the way the government recommends is exposing people, especially pregnant women, to unsafe levels of mercury.” And two years after the nation’s stomach was turned by pink slime, its manufacturer Beef Products, Inc. had reopened plants and even filed a defamation lawsuit against ABC and Diane Sawyer. Who are you calling pink slime?

Here are some hidden-in-plain-sight facts Big Food doesn’t want you to know.

Did you ever wonder why bacon, hot dogs, ham, cold cuts, Slim Jims and most processed and cured meats taste salty, look pink and stay on the shelves indefinitely? Because food processors use the preservatives nitrite and nitrate which produce the pink color, delay bacterial growth and rancid taste and smell and impart a cured or smoked meat flavor.

Researchers have known since the 1970s that the preservatives become "nitrosamines" in the body—compounds that cause cancer. Following a 2008 American Institute for Cancer Research/World Cancer Research Fund report that found just one hot dog a day increases the risk of colorectal cancer by 21 percent, there were calls to ban such processed meat, especially in schools. Last year, the World Health Organization reignited the controversy and declared processed meats Group 1 carcinogens, the highest risk category that exists. WHO researchers, who analyzed 800 studies, defined processed meat as “anything transformed to improve its flavor or preserve it, including sausages, beef jerky and anything smoked,” reported the Boston Globe. Researchers identified links from processed meats to colon, prostate and pancreatic cancers.

Scientific articles also link nitrosamines to lung cancer, kidney cancer, stroke, coronary heart disease and diabetes mellitus. The American Cancer Society tells people not to eat them. Still, the industry-influenced USDA remains agnostic about the dangers of nitrosamines in its new Dietary Guidelines rolled out this year. "We are pretty disappointed the report doesn't recommend limiting red and processed meat because of the link to cancer," said Katie McMahon of the American Cancer Society Cancer Action Network.

2. Shrimp are a Safety Disaster Waiting to Happen

Most people do not realize the majority of shrimp sold in the U.S. are neither domestic nor wild-caught. They are imported from countries like Thailand, India and Indonesia where they are "farmed" in crowded, filthy pools with antibiotics, disinfectants and parasiticides that are banned in the U.S. The shrimp themselves have their eyes removed before being raised in pools so dense and dirty that many die.

The FDA is responsible for ensuring the safety of such imported shrimp for human consumption, yet more than 96 percent of shipments are not opened or even checked when they arrive on the dock in the U.S. Instead, exporters' identities are stored in the FDA Automated Commercial System (ACS) system and only if a country or company has had prior problems will it receive receive inspections. Even then, the so-called inspection may only be a look at documents or a visual inspection, not lab tests for dangerous substances. FDA inspectors admit that blocked exporters can “transship” their products from another country to fool inspectors. Is anyone surprised that banned drugs and mislabeled products including pet shrimp find their way to U.S. dinner tables?

3. Antibiotic Use in Livestock is Getting Worse

By now, most conscientious eaters know that Big Food uses tons of antibiotics to make animals gain weight with less feed thus driving antibiotic resistant bacteria and infections. Antibiotics are also used to prevent illness in the extremely crowded and unsanitary conditions of “factory farms.” What people may not realize is that Big Food has repeatedly defeated government attempts to regulate and prohibit antibiotic use and that Big Pharma and Big Food, not the government, actually call the shots. In 2008, the egg, chicken, turkey, milk, pork and cattle industries stormed Capitol Hill over the proposal to prohibit the use of Cefzil and Keflex (important human drugs called cephalosporins), claiming they could not “farm” without the drugs. They won.

In 2014, the FDA tried regulation again, proposing a voluntary plan in which drug makers would agree to remove the use of “growth promotion and feed efficiency” on antibiotic labels and the drugs would only be used to prevent disease. Did the government really think Big Pharma and Big Meat would undercut their own profits and meat producers would comply?

Soon after the announcement, Michael Hansen, senior staff scientist at Consumers Union, told me it was likely Big Pharma would simply replace “growth production" with "disease prevention" on the labels and continue the routine antibiotic use. Cattle producers could continue to feed grain instead of grass to animals even though it produces more liver abscesses, then treating them with the antibiotic Tylosin to "prevent disease," he told me.

So far, according to the FDA’s 2014 Summary Report on Antimicrobials Sold or Distributed for Use in Food-Producing Animals, domestic sales and distribution of livestock cephalosporins increased by 57 percent between 2009 through 2014, antibiotics like clindamycin by 150 percent and antibiotics like gentamicin by 36 percent. Thanks for nothing, FDA.

4. Mad Cow Disease is Still with Us

There is probably no disease Big Food fears as much as “mad cow,” a fatal, incurable highly contagious disease transmitted by particles called prions that are not killed by heat, ammonia, bleach, hydrogen peroxide, alcohol, phenol, lye, formaldehyde or even radiation. They are said to remain infectious in the soil for years.

Subsequent mad cow scares have caused the biggest beef recall in U.S. history, terrified medical patients (when news of a patient with a related human brain disorder, CJD, in a hospital surfaced) and destroyed futures markets in minutes. Driving the panic are questions about how cows get the disease, whether the feed is safe and where herd mates and offspring are. But in recent years, Big Food has mitigated the problem by terming new mad cow cases "atypical"—meaning they “just happen.” Since the pathogenesis is spontaneous, the feed sources and herd mates no longer have to be traced and the story will soon drop from the news and consumers' concerns.

Yet the disease is far from gone. Last year, a likely new case of mad cow turned up in Ireland and both Norway and Canada reported “atypical” cases. This month a suspected mad cow was found in France. Last year, two people died from the mad cow-related version of CJD in Italy and Tampa had two cases of CJD whose origins were not determined.

Do you remember the porcine epidemic diarrhea virus (PEDv) outbreak in 2013 or the bird flu epidemic of 2015? Chances are no, because Big Food managed to prevent the public from seeing dumpsters full of the dead livestock lest people ask what is happening on factory farms, why are so many animals sick, what drugs are they taking and why should we eat products from such sick animals. News reports instead focused on farmers' financial losses, price increases in the products and farmers' needs to "restock."

At least one tenth of U.S. pigs died in 2013 and 2014 from PEDv, though Big Food assures food consumers the disease is unlikely to jump species and infect people. Almost 50 million flu-stricken chickens and turkeys died in 2015, "piled up in dumpsters, attracting flies and emitting a stench. Only recently has the disposal crisis abated, with the help of "round-the-clock incinerators and crews in hazmat suits," reported Fortune. While egg layers were dosed with carbon monoxide, floor-reared turkeys and broiler chickens were herded into an enclosed area and administered a propylene glycol foam that suffocates them.

Neither of the outbreaks are gone. In January, the bird flu was back at an Indiana turkey farm where all the birds were slaughtered and their carcasses destroyed. Pork producers say PEDv will likely never be gone in the U.S. and other diseases also loom.