5 Horrifying Images from the Nepal Earthquake 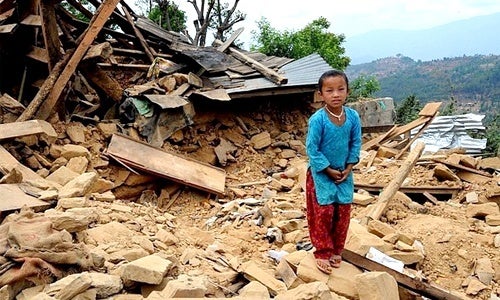 A week after a 7.8-magnitude earthquake ripped through Nepal and parts of India and China, rescue workers continue to search through the rubble for survivors in Kathmandu, near the epicenter of the quake. The death toll has climbed to more than 6,000, including those who died in an avalanche on Mount Everest.

The Nepali government and outside aid are trying to help victims of the quake, which destroyed an estimated 130,000 homes, reports CBS News. The UN Children’s Fund, or UNICEF, has delivered nearly 30 metric tons of supplies, including tents, water purification tablets, and first aid and hygiene kits.

These five images from Instagram capture the earthquake’s devastating impact on the region:

#Repost @prashanthvishwanathan with @repostapp. ・・・ 72 year old Sundaya Tamang whispers to her cow Lakshmi as she lies buried in her cowshed unable to be rescued breathing her last. Sundaya and her family has lost three houses to this earthquake. “She ( Lakshmi) use to give my household 7 liters of milk, she was our sustenance.” @actionaiduk was the only agency to reach with aid to the remote village of Phalame in the district of Khabre in Nepal. All 150 houses have been leveled in this earthquake. @actionaiduk #Nepal #nepalquake #nepalphotoproject A photo posted by Kalinka (@kalinkaamelia) on May 1, 2015 at 6:22am PDT

Coordinating health sector partners in support of Nepal’s government, WHO is striving to reach remote areas beyond Kathmandu where road access has been hampered by damage caused by ‪#‎NepalEarthquake. To date, Sindhupalchowk has reported the highest fatalities of any region in ‪#‎Nepal. Authorities say that at least 1400 people had died there, and warning that the number could rise to 3000. WHO is working with health authorities to get health workers in place to care for the injured, and prevent and control the spread of infectious diseases, including diarrhoea. Photo: WHO/A. Khan — #NepalQuake #Earthquake #NepalEarthquakeRelief #Health #EmergencyResponse #WorldHealthOrganization #OMS #Sindhupalchowk #HealthWorkers #NepalQuakeResponse

A photo posted by World Health Organization (@worldhealthorganization) on May 1, 2015 at 1:04am PDT

Smriti, 8 years old, sits outside a makeshift shelter around what was her family home in Hari siddhi, Lalitpur district, #Kathmandu valley. Photo by @zishaanakbarlatif #nepalphotoproject #nepalearthquake #nepal   A photo posted by NepalPhotoProject (@nepalphotoproject) on May 1, 2015 at 8:54am PDT

#Repost @unicef with @repostapp. ・・・ Akriti, 8, looks for her books among the rubble that used to be her house in Sanga Chowk in Sindhupalchowk District in #Nepal. On 25 April, a 7.9 magnitude earthquake struck the country, killing almost 5000 people and injuring more than 9700. Around 1.7 million children are now in urgent need of aid in the worst-hit areas. We’re on the ground delivering vital support, including clean water, shelter and sanitation – support our work at supportunicef.org/nepal. Photo by Chandra Shekhar Karki. #NepalEarthquake A photo posted by Harriet Richards (@hatrich) on May 1, 2015 at 8:20am PDT