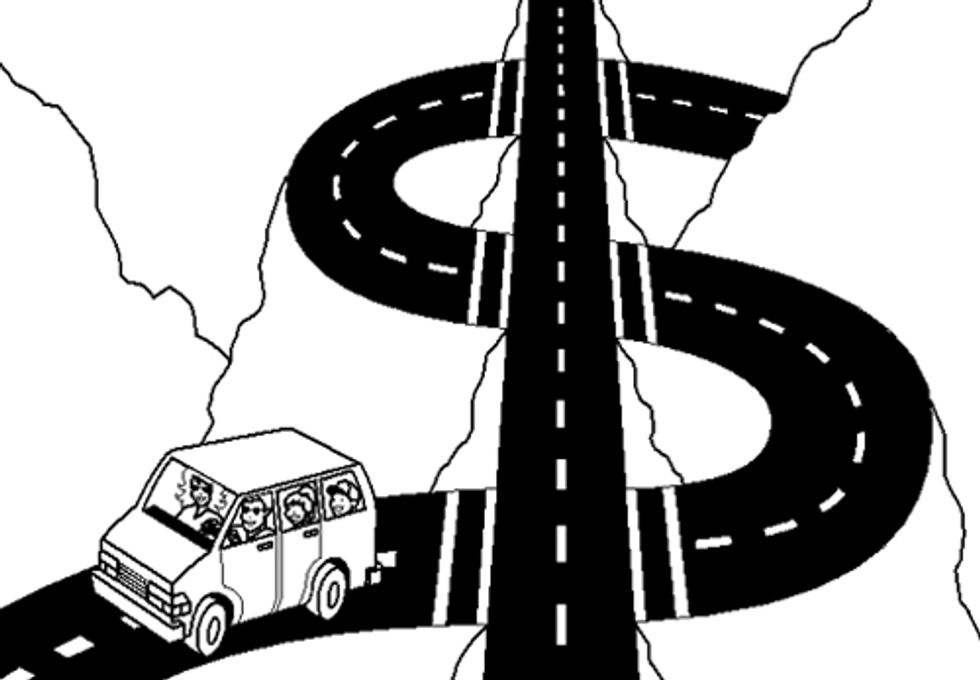 Here in northern California gasoline is now retailing for $4.20 a gallon. Prices haven’t been this high since mid-2008. Forecasts for $5 per gallon gas in the U.S. this summer are now commonplace. What’s driving prices up?

Most analysts focus mostly on two factors: worries about Iran and increased demand from a perceived global economic recovery. However, as we will see, there are also often-overlooked systemic factors in the oil industry that almost guarantee us less-affordable oil.

Iranian Poker
Iran wants nuclear power and (probably) the capacity to build a nuclear weapon; the latter is unacceptable to Israel and the U.S. But there is more to the standoff than this. Iran is a strategic oil and gas exporting country that, for the past 30 years, has escaped integration into the U.S. system of client states; it also occasionally provides assistance to Israel’s enemies. Following the disastrous U.S. invasions and occupations of Iraq and Afghanistan, Iran has emerged as the principal power in the region, capable of further destabilizing either of its war-torn neighbors. And Tehran has led a move to ditch the U.S. dollar as the standard currency of exchange in the global oil market.

Western sanctions include oil export embargoes that will gradually tighten over the coming months. Tehran has turned the threat around by proactively cutting off supplies to France and the UK. If the situation spins out of control in any of several possible directions, oil prices could shoot to $200 a barrel. So worry alone is keeping prices up.

Of course, the downside of open hostilities could include much more than unbearable oil prices. Nearly the entire Middle East could be thrown into chaos for the foreseeable future. It’s even conceivable that Russia and/or China could be drawn into the conflict in some way.

Hungry Chinese Hordes in Buicks
Meanwhile oil prices are also tied to shifting assessments of the state of the global economy. On days when the financial news is good, oil prices nudge up; on days when the luster on the latest Greek bailout package fades, oil prices tumble. The ongoing Greek debt crisis promises to plunge the EU into recession this year; on the other hand, the Dow Jones average is flirting with 13,000.

If the world economy consisted only of the U.S. and the EU, oil prices would probably be trending substantially lower than they are. But China increasingly commands attention. There, oil consumption is still soaring (it grew 6 percent in 2010 and again in 2011), and the Chinese are better able to withstand high prices because they wring more economic utility from every precious drop. The situation must be puzzling for many Americans. With gasoline consumption in the U.S. at a five-year low and domestic oil production at a six-year high, it seems incomprehensible that prices would be staging a rally. Americans have to get used to the idea that the U.S. is no longer at the center of the universe.

Then there are oil supply disruptions in South Sudan, Syria, and Yemen. And of course those pesky oil-futures speculators, who pile on to magnify trends on both the upside and the downside.

Yet these are all short-term factors; there are also slower-acting forces pushing up petroleum prices. And it is these that we really should be paying attention to, because they will be with us for years to come and are generally very poorly understood.

The Peak of Peak-Oil Denial
Costs of production are rising inexorably—and fairly rapidly—as a result of replacement of conventional crude with oil produced from horizontal drilling and hydro-fracturing, ultra deepwater drilling and tar sands. Only a decade ago, a world oil price of $20 per barrel evidently provided plenty of incentive for the industry to develop new supply sources, as total global production continued to increase year after year. Today, most new projects look uneconomic if oil prices are anything shy of $85. Ironically, pundits often depict this shift as a miraculous new development that promises oil aplenty till kingdom come.

During the past few months, op-eds and talking heads have announced the death of “the peak oil theory” even as actual world crude production rates remain stagnant and oil prices soar. The fallacy in this thinking arises from a confusion of reserves with production rates. With oil prices so high, staggering quantities of low-grade hydrocarbons become theoretically profitable to produce. It is assumed, therefore, that the scarcity problem has been solved. If we extract enough of these low-grade resources, that will bring oil prices down! But of course, if the oil price goes down then these unconventional sources become uneconomic once again and effectively cease to be countable as reserves.

The absurdity of the “new golden age of oil” line of thinking will take a while to reveal itself; how it will do so is fairly easy to define from trends in the “fracking” shale gas industry, where temporary abundance (due to high rates of drilling a few years ago when gas prices were high) has driven gas prices back down to the point where producers are losing money, cutting drilling rates and selling off leases. All that’s left to this sad story is the coming denouement, wherein shale gas producers go bankrupt, production rates fall and the nation finds itself back in the midst of a natural gas supply crisis that pundits claimed had been deferred for a century.

The oil problem can be summed up simply: Fossil fuel supply boosters know how to add, but they’ve forgotten how to subtract. Seeing new production coming on line from North Dakota, for example, they extrapolate this growth trend far into the future and forecast oil independence for the nation. But most U.S. oilfields are seeing declining rates of production, and individual wells in North Dakota have especially rapid decline rates (up to 90 percent in the first year). Do the subtraction properly, and it’s plain that net supplies will continue growing only if drilling rates climb exponentially. That, again, spells higher production costs and higher oil prices. If the economy cannot support higher prices, and hence high drilling rates, then net total rates of production will drop. The one future that is impossible to achieve in any realistic scenario—low prices and high production rates—is precisely what is being promised by politicians and oil industry PR hacks.

Oil and Politics: Together Again
What will happen later this year if gas prices do break the $5 per gallon psychological barrier?

First, the problem is likely to directly impact the U.S. far worse than most other nations. Countries that tax fuel at high rates (including most European nations) have in effect already adapted to higher prices and will therefore be somewhat cushioned from the impact. Meanwhile countries that export oil will actually benefit from expensive crude.

Some analysts have suggested that price run-ups of the past few years have forced the U.S. to adapt, and that America is now more resilient to oil price shocks than was formerly the case. Our new cars are more fuel efficient, and most industries (including the airlines) have by now factored higher oil prices into their business models. There is some truth to this, but the adaptation is only partial at best. When gas hits $5 a gallon, consumers will need to cut back somewhere.
They’re already in debt up to their eyeballs and facing stagnant or declining household incomes. Something has to give.

Let’s not forget (though we wish we could): it’s election season! Republicans are already hammering Obama over the prospect of $5 gas and promising that, if elected, they will drive prices down to half that level. Meanwhile, with the exception of Ron Paul, they’re demanding harsher dealings with Iran, and are thus exacerbating one of the primary factors driving prices up. Altogether, it’s a neat trick.

Obama will be doing everything he can to keep gasoline prices in check. But what are his options? He could open up the sale of drilling rights on more federal lands—yet while that might make the fossil fuel industry happy, it will have no immediate impact on oil markets.

The one thing he could do that would have some short-term effect is to sell oil from the Strategic Petroleum Reserve (SPR) on the open market. The day of the announcement, oil prices would plummet. They might remain depressed $10 or more for a few weeks, but the impact would only be temporary. Meanwhile Obama’s Republican rivals would decry the use of the SPR for political purposes. Opening the SPR would in any case offer no solution to the deeper problems making fuel less affordable. And an emptying of the SPR prior to a potential showdown with Iran over the Strait of Hormuz would indeed be foolish.

In fact, the only thing likely to reduce prices substantially and for a long period of time is serious, prolonged global economic contraction. But this is unlikely to be a plank in any candidate’s platform.

Lots of smart people will be striving to manage these worsening problems. Obama will try to keep a lid on the Israel-Iran dispute until after the election. He’ll aim to keep gas prices down while appearing to give every possible perk to the oil and gas industry. He’ll also try to keep impacts to the economy minimal—or at least delay the release of statistics that reveal just how bad the situation really is.

At the same time, though, his political enemies will be highlighting economic damage and trying to exacerbate the geopolitical crisis.

Keeping this simmering pot from boiling over may just be more than mere mortals can do.