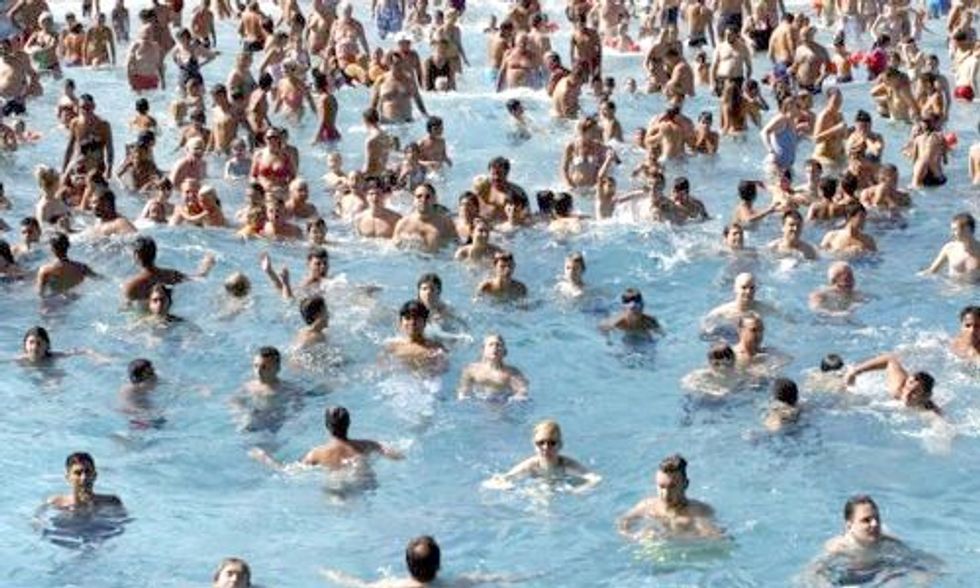 Deniers will keep on denying apparently, but the signs of climate change are everywhere. As the planet has warmed up, severe weather events are happening in every corner of the globe, alerting us to the need for strong, immediate action.

1. Many parts of the world are suffering from extended heat waves. We've heard a lot about the heat waves blanketing India and Pakistan, which have claimed a high body count. Thousands of people in the region have died as a result. The situation has been exacerbated by the region's high poverty—most of those dying have been the poor and/or homeless. Temperatures have soared as high as 122 degrees Fahrenheit in New Delhi.

“Let us not fool ourselves that there is no connection between the unusual number of deaths from the ongoing heat wave and the certainty of another failed monsoon,” India's Earth Sciences Minister Harsh Vardhan told Reuters. “It’s not just an unusually hot summer, it is climate change."

2. There's been no dramatic death toll there, but Europe is also languishing under a heat wave, and temperatures there have set records in many places. Germany just set an all-time heat record of 104.5 degrees in the city of Kitzingen. Downtown Frankfort also had its hottest day on record, with a temperature of 102.2 degrees. Paris saw its second hottest day ever on July 1 when the temperature reached 103.5.

And players at this year's Wimbledon might almost think they're back at January's Australian Open where scorching heat has impacted matches for years during that country's peak summer season. On July 1, it reached 96 degrees at the nearest weather reporting station to the fabled tennis courts, but on-court temperatures were much higher. The temperature on Center Court was measured at more than 106 degrees.

Maybe those dangerously hot Australian matches have made the players take heat waves in stride, but top women players seemed unconcerned. “Yeah, it is going to be very hot," said the world No. 1 ranked player and top seed Serena Williams. "But I don’t think I’ve ever played in 34, 35 degrees Celsius here. But I do in other countries. I just was training in Florida. It was like 42 degrees. I mean, this will be OK.” The world No. 4 player, Maria Sharapova, was similarly unconcerned. "It's much warmer in my hometown of Longboat Key, Florida," she said.

It's a #heatwave in #Switzerland at 38°C - the Place des Nations fountains @UNGeneva are a good place to cool down! pic.twitter.com/EX24TnkkqS — UN Geneva (@UNGeneva) July 3, 2015

3. The wildfire season has started earlier than usual up and down the Pacific Coast of the U.S. and Canada with thousands of acres of drought-parched forests going up in flames. It's not only starting earlier but lasting longer and producing larger and more numerous fires, thanks to a combination of warming temperatures, extreme drought and stronger winds. In California, Oregon, Washington, Arizona, Saskatchewan, British Columbia and Alaska, hundreds of fires are forcing the evacuations of thousands of people from their homes. Alaska, where temperatures have warmed twice as fast as the rest of the U.S., saw almost a tenfold increase in wildfires in the 2000s over the 1950s and 1960s. Fires in western Canada are so large and numerous that smoke is blanketing much of the western and midwestern U.S., leading to air quality warnings as far away as Colorado and Minnesota. The National Weather Service has reported some smoke as far east as the Atlantic Coast.

And experts fear that the 2015 season could be the worst yet.

"Climate change and misguided forestry policies have combined to present a landscape very vulnerable to devastating fires,” Dr. Wally Covington, director of the Ecological Restoration Institute at North Arizona University, told Climate News Network. “Since around 2000, we’ve seen more severe dry weather, matched with high winds throughout the western U.S. Intense firestorms are the result. Get in the vicinity of one of those and it’s like being near a blast furnace.”

4. Greenland's ice sheet remained solid during its cool spring, but now that summer has arrived, it's melting at a faster-than-normal rate for this time of year, with half its surface now liquid. Greenland might seem remote, but its ice sheet, the second largest glacial ice mass in the world, influences sea levels and how fast the Gulf Stream current moves. Although the temperatures in Greenland seem polar compared to Europe, those temperatures in the 30s and 40s are accelerating melt. The movements of massive hunks of ice are even causing earthquakes. “The earthquakes are not themselves destabilizing the ice sheet,” said Meredith Nettles of the Lamont-Doherty Earth Observatory at Columbia University. "But they are a marker of the fact that the ice sheet is getting smaller and retreating."

According to the Union of Concerned Scientists, "Global climate change affects a variety of factors associated with drought. There is high confidence that increased temperatures will lead to more precipitation falling as rain rather than snow, earlier snow melt, and increased evaporation and transpiration. Thus the risk of hydrological and agricultural drought increases as temperatures rise."

Jon Stewart: 'It's Time to Get Real' About California's Epic Drought