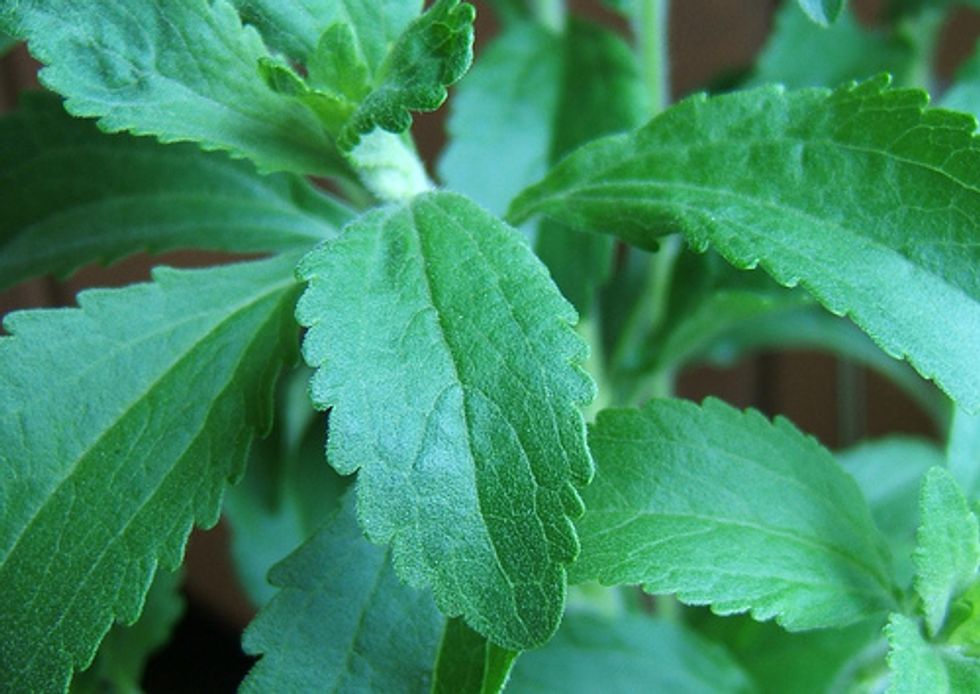 Want to gratify your sweet tooth but trying to avoid highly processed white sugar? Here are five eco-friendly alternatives to sugar, courtesy of the Sierra Club.

1. Stevia—Healthcare executive Jim May founded Wisdom Natural Brands in 1982 after a Peace Corps volunteer who'd worked in Paraguay convinced him to taste the leaves of an herb called stevia. The processed plant can be up to 300 times sweeter than sugar but has no calories, carbohydrates or chemicals, and can be used potent natural alternative to artificial sweeteners. May sunk his life savings into starting a company that makes SweetLeaf Stevia. He instilled strict rules for sustainable practices: No chemicals, solvents or alcohols in extracting or purifying the plant; leaf residue becomes mulch or cattle feed; and water is recycled to irrigate local Guaraní farms.

The herb stevia can make a a natural zero-calorie sweetener. Photo credit: CivilEats.com

2. Pesticide-free honey—Zeke Freeman grew up on a farm in Pennsylvania, where his twin passions sprouted: producing artisanal food and caring for pollinators. "I was able to eat homegrown fruits and vegetables off the land," he says. "We won't have that if we lose the honeybees." After he founded Bee Raw, he started the Save the Bees fund to combat colony collapse disorder, which has wiped out millions of hives. The company's Single Varietal Honey is pesticide-free, of course, but also unprocessed, unfiltered and packaged in gift-worthy glass. Flavors include wild raspberry, star thistle, orange blossom and blueberry—each of which will last years if properly stored.

3. Organic Whole-Cane Sugar—How about a sweetener that retains its vitamins and minerals? The Organic Whole Cane Sugar from Rapunzel—a German company that's been all-organic since its 1974 launch—is made from canes harvested by hand (bypassing the typical burning of dry leaves) at fair-trade farms in Brazil, then processed so minimally that the plant's nutrients are preserved. The result: golden-colored, fine-textured granules, unbleached and unrefined, with a subtle molasses flavor that taste especially good in pastries, cookies and cakes. You can substitute it for regular white sugar in any recipe, cup for cup.

4. Organic Coconut Sugar—Coconut palm trees produce up to 75 percent more sugar per acre than cane fields do, and require just a fifth of the resources to crank out the same amount of sweetener. So it's obvious why Organic Coconut Sugar from Madhava, produced from those trees' flower buds, would be a sustainable choice. Further sweetening the deal, this product is unrefined, is verified by the Non-GMO Project, and maintains nutritional perks like amino acids, iron and zinc. Use it as you would any other sugar.

5. Sweet Dreams Organic Brown Rice Syrup from Lundberg Family Farms smells, feels and tastes like honey but has a nuttier undertone. If you're a vegan, this sticky stuff does the trick: Amie Valpone, a Manhattan nutritionist who runs the Healthy Apple blog, says, "I love the way it binds desserts without adding an animal source. I also love the taste and often choose it over other sweeteners when baking." You can stir it into coffee or tea or drizzle it atop ice cream or pancakes. Brown rice syrup is less sweet than sugar, so use 1¼ cup in place of 1 cup of sugar. Lundberg's organic rice isn't genetically modified and is grown without synthetic fertilizers.