5 Brightest Planets Align for First Time in a Decade 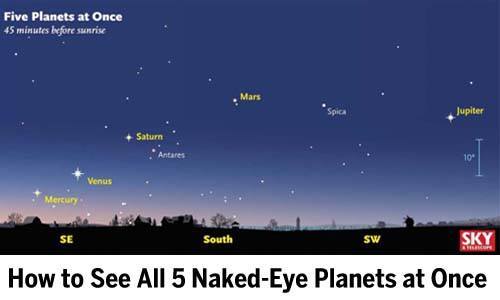 For the next few weeks, stargazers are in for a treat. It’s the first time in more than a decade that all five planets visible with the naked eye—Mercury, Venus, Mars, Jupiter and Saturn—are visible at the same time. 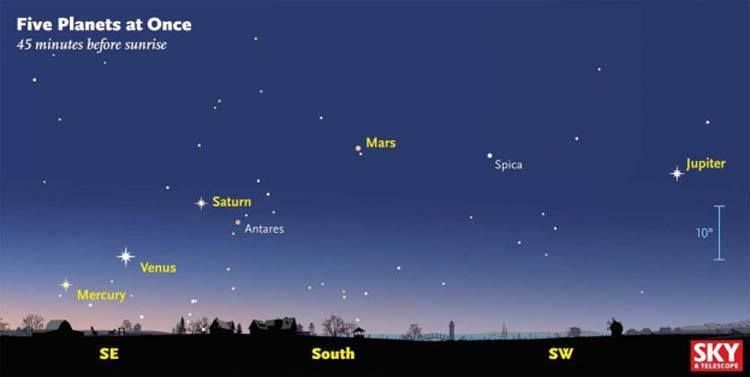 About 45 minutes before sunrise from Jan. 20 to Feb. 10, all five naked-eye planets will be visible simultaneously. At the end of January, the waning moon will join the celestial party. Photo credit: Sky & Telescope

“Venus and Jupiter will be easy to see, being the brightest objects in the sky,” Professor Fred Watson of the Australian Astronomical Observatory told The Guardian. “Mars should also be easy to spot because of its distinctive red or golden color.”

“Saturn is between Mars and Venus, so it’s lower down,” Watson said. “It’s the one you’re most likely to confuse with stars because it’s not as bright as Jupiter. But it’s yellowish. And with binoculars with about 10 times magnification you can tell it’s not a round dot of light like a star—it looks elongated.” Mercury can also be tricky to spot because it will be close to the rising sun.

The reason for this rare, celestial phenomenon is that “the five planets happen to be on the same side of the sun at the same time,” Alan Duffy, an astrophysicist at Swinburne University, explained to The Guardian. So, all the planets will be visible in the early morning, rather than some of them being visible in the evening.

If you miss out this time, you’ll be able to see all five of the planets again in August when they will be visible just after sunset. But that will be your last chance until 2018.

For more information on this rare, celestial occurrence, listen to this Here & Now segment:

Geologists: Humans’ Mark on the Earth Will Be Detectable Millions of Years From Now