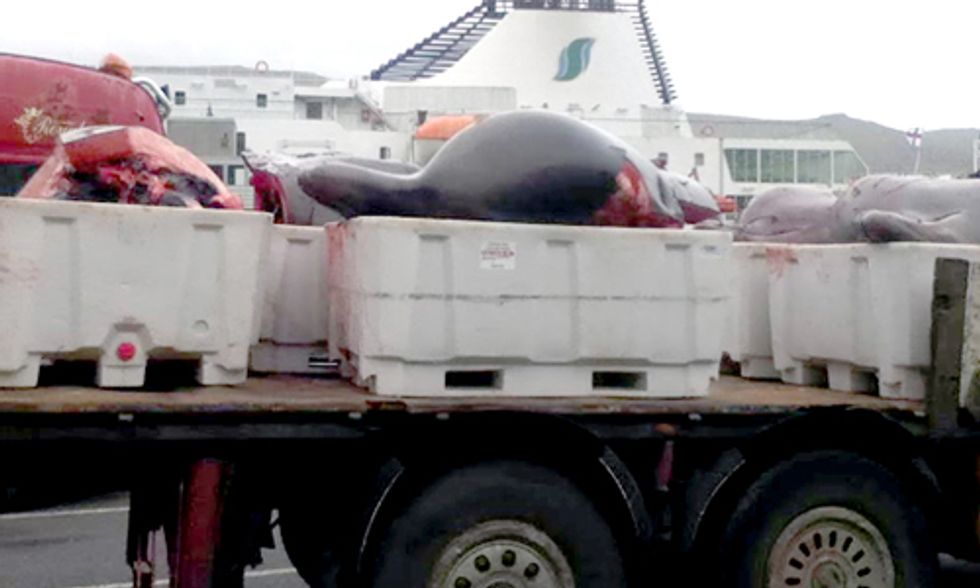 Update, Aug. 31: According to Sea Shepherd Conservation Society, 14 volunteer crewmembers of Sea Shepherd pilot whale defense campaign Operation GrindStop 2014 arrested on Saturday in the Faroe Islands have been released today. The members of the onshore team led by Sea Shepherd USA and the offshore team led by Sea Shepherd France were arrested as they attempted to protect a pod of 33 pilot whales from the brutal mass slaughter known as the “grindadrap” or  “grind.” The six volunteers from the land team must return to court tomorrow, Sept. 1. The eight members of the boat team have been told to return to court on Sept. 25. Postponing the court date until that time allows the police to hold the three Sea Shepherd boats until the end of September, as they are being held for "evidence." All video and still camera data cards were removed by police and are still being held.

In the early hours of yesterday morning, five bottlenose whales were found stranded on the Faroese island of Suduroy. In most places around the world, cetaceans who are stranded in shallow waters are given a helping hand by humans and ushered back out to sea. However, rather than make an attempt to rescue the beached pod, knife-wielding Faroese whalers killed and butchered the stranded, helpless whales, turning the bay to a sea of blood.

The whales were found by fisherman around 5:30 a.m. on the beach of Hvalba on Suduroy Island where they were brutality killed. Their enormous heads were lined up in bins and trucked off. Photo credit: Sea Shepherd Conservation Society

Sea Shepherd Conservation Society—with a crew of offshore volunteers led by Sea Shepherd France and a team of onshore volunteers led by Sea Shepherd USA, all present in the Faroes to defend pilot whales from the brutal mass slaughter known as the Grind—could have helped in any efforts to save these whales from a needless death. Unfortunately, they were blocked from approaching the scene. The whales were found by fisherman around 5:30 a.m. on the killing beach of Hvalba on Suduroy Island.

Sea Shepherd volunteers eventually got through the barriers and were able to take photographs and film as the whales were butchered onshore. According to reports, the whales were still alive when they were found, as the whalers severed the whales’ spinal cords to kill them before they were towed for butchering. The same method is used to kill pilot whales and other species in the Faroese grind hunts.

The shocking images and footage captured by Sea Shepherd show the brutality of the whale killers, who smiled as the whales were reduced to butchered meat and their enormous heads were lined up in bins. After the bodies were butchered, the heads were trucked to Torshavn for what is believed to be rendering, with Operation GrindStop volunteers following and filming the entire way.

“The population of these rather rare Northern bottlenose whales is believed to be no more than 10,000. The loss of any of these vanishing whales is tragic,” said Sea Shepherd Founder, Captain Paul Watson. “If they could have been saved, to slaughter these whales in need was the ultimate betrayal and, frankly, nothing short of murder.”

Rather than make an attempt to rescue the beached pod, knife-wielding Faroese whalers killed and butchered the stranded, helpless whales, turning the bay to a sea of blood. Photo credit: Sea Shepherd Conservation Society

Faroese regulations allow for the killing of beached bottlenose whales only if they cannot be rescued and driven back out to sea. Sea Shepherd is consulting with an attorney and police to determine if the whalers have violated these regulations.

Faroese locals have told Sea Shepherd that it is common for bottlenose whales to strand at Hvalba, and it is believed by some that ocean currents in the area could cause this to happen. It is also more difficult to rescue stranded whales of this size than it is for dolphins or pilot whales, and their organs can be crushed under their weight if the whales are in shallow waters for too long. We cannot be certain that the whales could be saved, but it appears that there were no attempts to do so.

Another possible cause of the stranding is seismic testing. Currently, extensive seismic testing is being conducted between the Shetland and Faroe Islands. Many species of marine mammals are vulnerable to the effects of such testing and sonar, but the family of beaked whales, of which the Northern bottlenose whale is a member, is particularly susceptible.

It is possible, due to the large number of bottlenose whale strandings that occur in this region and the current seismic testing, that there will be more strandings in the Faroe Islands. Sea Shepherd is calling for the Faroes to take a reasonable and compassionate route in response to any future strandings on their shores. In the case of any beached whales who could not be saved, a necropsy should be performed to determine the cause of death if possible. Everywhere in the world, it is standard that strandings are investigated—and seismic testing being conducted in the region should be a red flag.

Especially in the case of these Northern bottlenose whales, members of a vanishing population, to slaughter them for human consumption without any attempt at rescue—or even a necropsy—was shamefully irresponsible.

Sea Shepherd is ready and willing to offer assistance to the Faroese in any attempts made to save whales if a stranding should occur.

Sea Shepherd has led the opposition against the slaughter of cetaceans in the Faroe Islands since the 1980s, and today our goal remains the same: to bring the archaic grind to a complete stop. Launched in June, Operation GrindStop 2014, is Sea Shepherd’s largest Faroe Islands campaign to date. The multi-national land- and sea-based campaign features hundreds of volunteers who will be present in the Faroe Islands over the course of four months to defend pilot whales and other species of small cetaceans from the brutal and archaic mass slaughter known as “grindadrap” or the “grind.” To date, no grinds have taken place while Sea Shepherd has patrolled the islands. Should a grind commence at any time during the campaign, Sea Shepherd volunteers are prepared to intervene to save our clients.

Sea Shepherd is seeking additional volunteers to join the team in the Faroe Islands for the last month of campaign. The deadline for campaign applications is Sept. 10 at 5 p.m. EST. Anyone interested in volunteering should complete and submit the application.