5,000+ Take to the Streets for Historic ‘Tar Sands Resistance March’ 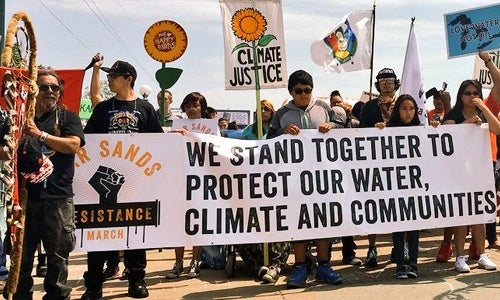 With the marching crowd stretching “as far as the eye can see” in downtown St. Paul, Minnesota on Saturday, thousands of people from across the Midwest came together to protest the construction of new pipelines and other infrastructure projects which they say will deliver only harmful climate impacts for the planet and irreparable destruction to the region, not the jobs and energy security promised by big oil companies and their political backers.

Proud to have been part of the largest march against tar sands EVER in the Midwest. People power will #StopTarSands! pic.twitter.com/oZrXMFJ0Mn

Under the social media tag of #StopTarSands, Saturday’s Tar Sands Resistance March was sponsored by dozens of groups, including national and local environmental organizations, Indigenous communities, and various social justice groups who all agree it will take a unified front to fight back against the pipeline companies and fossil fuel interests pushing for expanded development of tar sands, shale oil and gas deposits and other forms of extreme energy in the region.

In a statement, the coalition behind the march explained that the climate justice movement in the U.S. and Canada has far more targets to fight than just the Keystone XL pipeline:

“The movement promoting clean energy prosperity in place of polluting fossil fuels is growing and being heard in every corner of the country,” said Terry Houle, co-chair of the Sierra Club’s Northstar Chapter, which helped organize the event. The march “picks up where last year’s Peoples’ Climate March in New York left off—people from all walks of life are calling on the Administration to keep dirty fuels in the ground for the sake of clean air, clean water, and a stable climate,” Houle said.