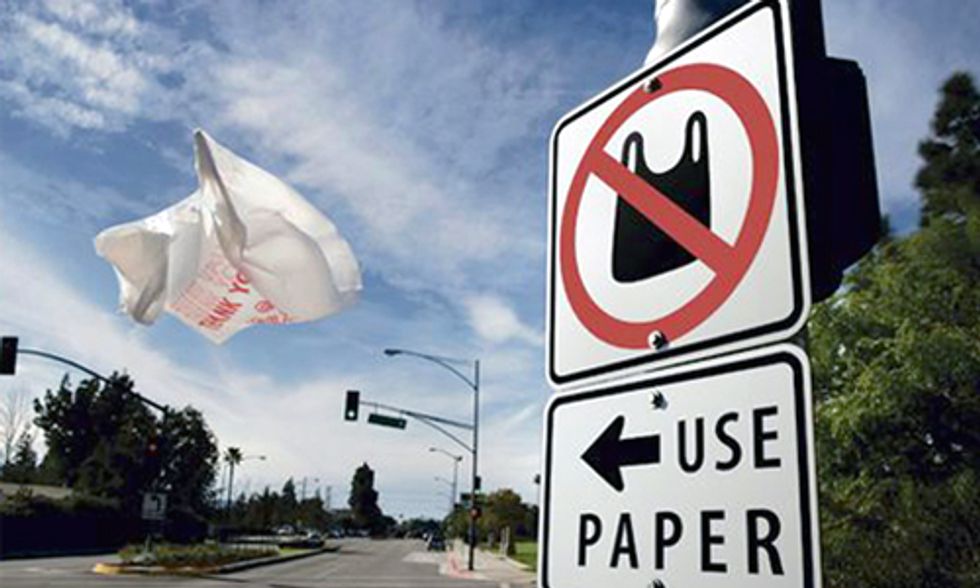 With the signing of a plastic bag ban in California yesterday, the number of Americans who will be affected by anti-bag legislation by 2015 climbed to 49 million. California is the first state to ban the bag. Nationwide more than 150 cities and counties are implementing bans or fees in attempts to reduce the estimated 100 billion plastic bags used in the U.S. each year.

Americans use on average nearly one plastic bag each day, taking something made from fossil fuels formed over millions of years and generally using it for mere minutes before throwing it away. The energy required to make 12 plastic bags could drive a car a mile. While plastic bags are recyclable, the vast majority never make it that far. Instead they end up in landfills or blow out of trash bins or garbage trucks—clogging storm drains, getting snagged in trees or littering streams, lakes and beaches. In nature, plastic breaks into smaller pieces, but it never fully disappears. Plastic refuse poses dangers to wildlife and to humans as chemicals leaching from discarded plastic enter water supplies and travel up the food chain.

In 2007, San Francisco became the first U.S. city to ban plastic bags. By 2014, when a ban in Los Angeles went into effect, nearly a third of Californians were covered under municipal or county plastic bag bans. Other sizable U.S. cities banning the bag include Chicago, Austin, Seattle and Portland, Oregon. County bans in Hawaii cover almost the entire state.

Washington, D.C., is among a smaller group of U.S. cities taking an alternate route in an effort to limit single-use bags: a 5¢ fee per bag has been applied at the checkout counter since 2010. Dallas is following suit with a fee going into effect in January 2015.

In less than 30 years, plastic grocery bags have moved quickly from novelty to entitlement. But the throwaway-and-forget mentality that allowed these bags to proliferate has proved a liability, wasting resources and marring landscapes. As the list of places working to scrap the bag expands, both in the U.S. and around the world, this could be the beginning of the end for the single-use plastic bag.