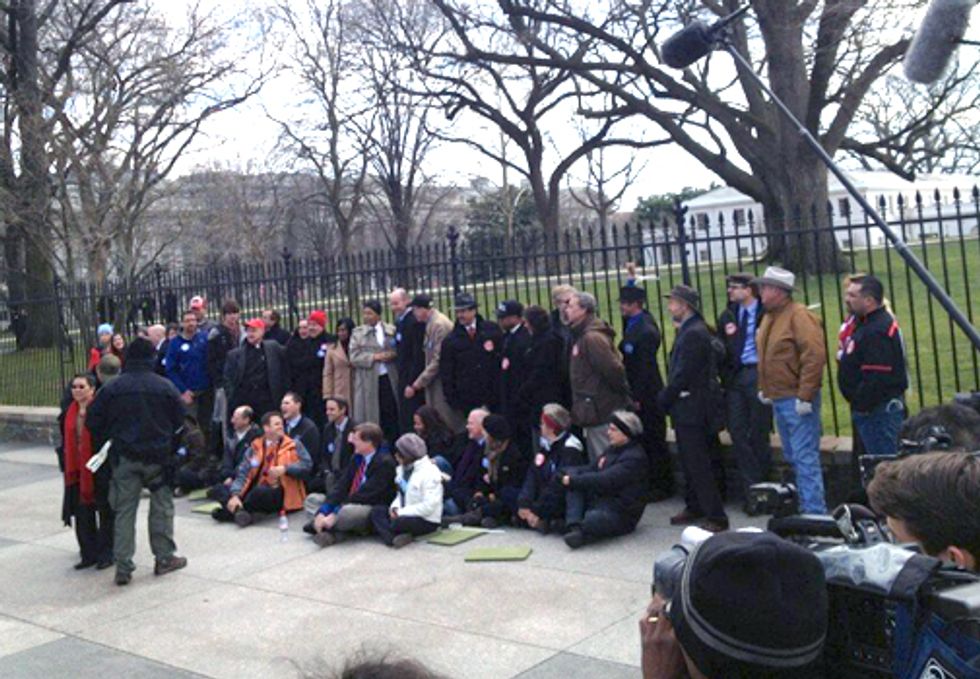 This morning, 48 environmental, civil rights and community leaders from across the country joined together for a historic display of civil disobedience at the White House where they demanded that President Obama deny the Keystone XL tar sands pipeline and address the climate crisis.

This morning, 48 environmental, civil rights and community leaders from across the country joined together for a historic display of civil disobedience at the White House where they demanded that President Obama deny the Keystone XL tar sands pipeline and address the climate crisis.

After blocking a main thoroughfare in front of the White House, and refusing to move when asked by police, the activists were arrested and transported to Anacostia for processing by the U.S. Park Police Department.

“The threat to our planet's climate is both grave and urgent,” said civil rights activist Julian Bond. “Although President Obama has declared his own determination to act, much that is within his power to accomplish remains undone, and the decision to allow the construction of a pipeline to carry millions of barrels of the most-polluting oil on Earth from Canada's tar sands to the Gulf Coast of the U.S. is in his hands. I am proud today to stand before my fellow citizens and declare, ‘I am willing to go to jail to stop this wrong.’ The environmental crisis we face today demands nothing less.”

“We really shouldn't have to be put on handcuffs to stop KXL—our nation's leading climate scientists have told us it's dangerous folly, and all the recent Nobel Peace laureates have urged us to set a different kind of example for the world, so the choice should be obvious,” said 350.org founder Bill McKibben. “But given the amount of money on the other side, we've had to spend our bodies, and we'll probably have to spend them again.”

“For the first time in the Sierra Club’s 120-year history, we have joined the ranks of visionaries of the past and present to engage in civil disobedience, knowing that the issue at hand is so critical, it compels the strongest defensible action,” said Michael Brune, executive director of the Sierra Club. “We cannot afford to allow the production, transport, export and burning of the dirtiest oil on Earth via the Keystone XL pipeline. President Obama must deny the pipeline and take decisive steps to address climate disruption, the most significant issue of our time.”

Waterkeeper Alliance President Robert F. Kennedy, Jr. smiles as he was arrested in front of the White House today in solidarity with many other environmental leaders.

“It’s unfortunate that civil disobedience is the only recourse against a catastrophic and criminal enterprise that will enrich a few while impoverishing the rest of humanity and threatening the future of civilization,” said Robert F. Kennedy, Jr., president of Waterkeeper Alliance.

If approved, the Keystone XL pipeline would boost carbon pollution tomorrow by triggering a boom of growth in the tar sands industry in Canada, and greatly increasing greenhouse gas emissions.

The U.S. Environmental Protection Agency  has estimated that this tar sands pipeline will boost annual U.S. carbon pollution emissions by up to 27.6 million metric tons—the impact of adding nearly six million cars on the road.

Leaders from across the country demand that President Obama deny the Keystone XL tar sands pipeline and address the climate crisis.

However, new research by Oil Change International (OCI) shows that the government’s estimates of the carbon emissions associated with Keystone XL underestimates the full impact of tar sands because a barrel of tar sands produces significantly more petroleum coke than conventional crude, which is more carbon-intensive than coal.

OCI’s research shows that Keystone XL will produce enough petcoke to fuel five U.S. coal plants. The emissions from this petcoke have not yet been included in climate-impact analysis of the pipeline or the tar sands industry and OCI shows that it will raise total emissions by at least 13 percent.