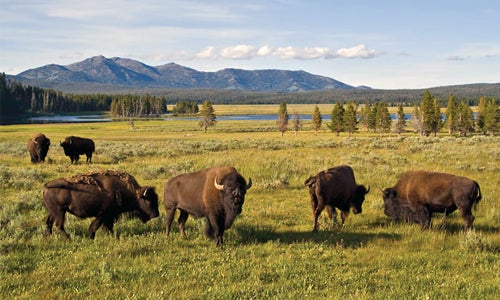 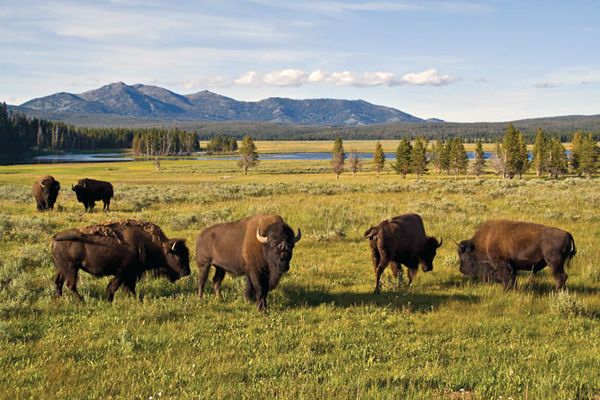 You think to yourself that this couldn’t possibly be happening, that Yellowstone National Park and some Native Americans could do this, but the shocking reality is that those who should be the fiercest champions and strongest allies for the buffalo are instead betraying them by taking the lead in the livestock industry’s culture of death. Photo credit: Yellowstone National Park

“It’s awful to see such a wild and majestic animal get shipped off like cattle to a slaughter house,” said BFC volunteer Andy Jozwiak, who witnessed the events this week.

An estimated 250 wild bison have so far been captured inside Yellowstone’s trap since Jan. 15. All have been shipped to slaughter except for five bison who were consigned to the U.S. Department of Agriculture-Animal and Plant Health Inspection Service for birth control experiments with the chemical pesticide GonaCon.

You think to yourself that this couldn’t possibly be happening, that Yellowstone National Park and some Native Americans could do this, but the shocking reality is that those who should be the fiercest champions and strongest allies for the buffalo are instead betraying them by taking the lead in the livestock industry’s culture of death.

Additionally, Montana and treaty hunters have killed more than 150 buffalo along Yellowstone’s boundary, raising the buffalo death count to more than 400.

This week, after the trap was emptied, BFC patrols witnessed the National Park Service and Montana Department of Livestock horsemen hazing (chasing) a group of 47 buffalo that were migrating towards Gallatin National Forest where Montana and treaty hunters are waiting to harvest bison. The agents attempted to capture the buffalo.

“The fiduciary responsibility of the National Park Service, and their obligation to protect the treaty-reserved hunting rights of the Nez Perce, are being subjugated by the ill-conceived herd management philosophy of a maximum population number based on politics,” said BFC board and Nez Perce tribal member James Holt, whose tribe is currently hunting buffalo under treaty right. “The tribal hunters should be outraged at bearing the conservation burden of misguided management under the IBMP. In no way does a ship to slaughter program trump treaty hunting in the Greater Yellowstone Area. This useless, costly practice must stop at once.”

BFC patrols witnessed as the horsemen hazed (chased) the buffalo away from the hunting zone and into the trap. A tractor with a round bale of hay was luring the buffalo while the horsemen pushed them. The buffalo, however, had other plans and made an about-face, escaping capture. The horsemen soon retreated.

“Baiting buffalo into a trap and away from the very small harvest area effectively negates the opportunity for treaty hunters,” said Holt. “It is a slap in the face of honoring treaties with the federal government, and the spirit of the buffalo.”

The National Park Service and other IBMP agencies, excluding the Nez Perce tribe who oppose shipping bison to slaughter, intend to kill at least 900 wild buffalo this year through hunting and slaughter. IBMP affiliates are no longer using the weak excuse of brucellosis to commit unjustifiable actions, but have now shifted their argument to “population control.” They aim to reduce the most important bison population in the world to a mere 3,000 animals, due to the intolerance of Montana’s livestock industry, intolerance that is codified in the statute: MCA 81-2-120, a law crafted by the livestock industry. The 3,000 population cap is an arbitrary number based on politics, not science or carrying capacity. Yellowstone’s own bison carrying capacity study indicates that the park alone can sustain upwards of 6,200 buffalo, while there are tens of millions of acres of public lands surrounding the park.

“The Park Service operates on the basis of ‘do as we say, not as we do,'” said Buffalo Field Campaign co-founder Mike Mease. “They consistently break their own rules by harassing, baiting and killing wildlife.”

Buffalo Field Campaign and Friends of Animals Wildlife Law Program have filed an emergency rule making petition and lawsuit (BFC press release) in an attempt to stop the slaughter. Exact capture and slaughter numbers are unknown because, for the second year in a row, Yellowstone officials refuse to be open with the public about their bison operations, stating they will only give out reports every two weeks. Buffalo Field Campaign has requested media tours of the Stephens Creek trap numerous times but those requests have not been granted.

“Bison should have the same rights as other species, but instead they are treated as second class wildlife,” said Kim Acheson, social media coordinator with Buffalo Field Campaign. “This needs to end and it’s a shame for our entire nation that one of our crown jewel national parks is leading the destruction of America’s last wild buffalo.”

Yellowstone buffalo are America’s last wild, migratory herds and the most important bison population that exists. They are the last to identify as a wildlife species and ecologically extinct throughout their native range. They’ve been added to the International Union for Conservation of Nature’s Red List for being “threatened with near extinction,” and even Montana designates the species “in greatest conservation need” with conditions “making [bison] vulnerable to global extinction.”

Watch the BFC’s intense footage of what Yellowstone National Park doesn’t want you to see: