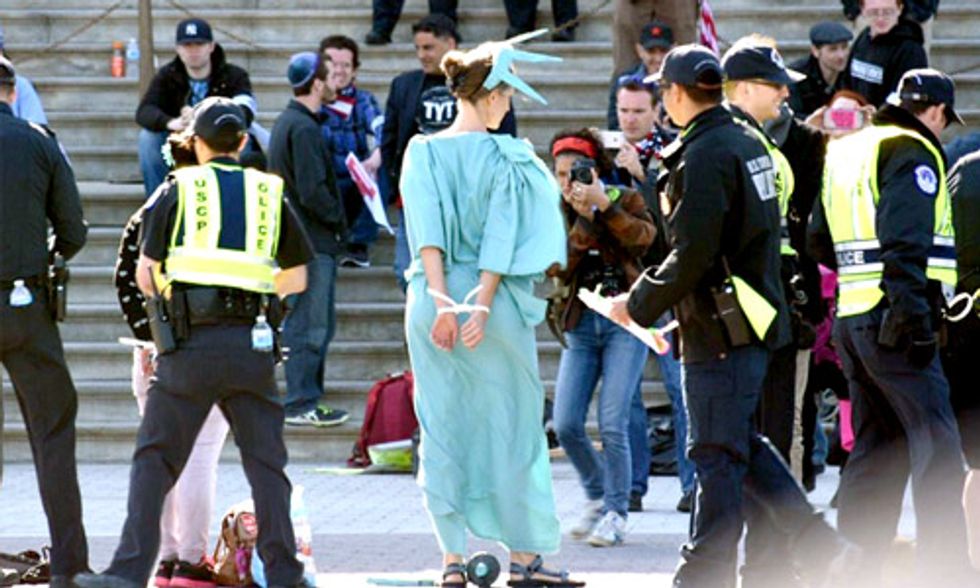 Vowing that this is "just the beginning," more than 400 people were arrested on Monday for holding a massive sit-in on the steps of the U.S. Capitol in Washington DC, protesting the influence of Big Money on the political system.

The actions today dovetail into a series of rallies, teach-ins and direct actions dubbed Democracy Awakening on April 16-18, during which more than 200 organizations representing hundreds of thousands of people will demand that Congress fill the vacant Supreme Court seat and pass legislation that restores voting rights and reforms the campaign finance system.

The civil disobedience campaign known as Democracy Spring is in the midst of an unprecedented mobilization featuring marches, sit-ins, teach-ins and rallies in the nation's capital, all aimed to pressure lawmakers to take a stand against the corrupt campaign finance system.

"Yesterday can be the beginning of the end of this corruption and inequality in our democracy," Kai Newkirk, campaign director for Democracy Spring, told Democracy Now! on Tuesday.

"If you choose to defend the status quo of corruption, we believe there's going to be growing nonviolent resistance in the streets, at the Capitol, at your fundraisers, and in the polls, to say that we will not take it anymore. We demand an equal voice in our democracy and we are going to be back at the Capitol today, tomorrow, and the next day."

On Tuesday, organizers are holding a civil disobedience training session before they, once again, march from Union Station to the Capitol steps for another round of nonviolent sit-ins. The group will be joined by dozens of elder activists who say they want to leave future generations a working democracy.

The coalition, which includes members of more than 100 pro-democracy, civil rights, environmental and peace organizations, says that more than 3,700 people have pledged to risk arrest, which would make Democracy Spring "the largest American civil disobedience action in a generation."

Newkirk said that it took hours to process the nearly 500 arrests and that there will be even more people joining the sit-ins Tuesday. Activists were charged with "crowding, obstructing, and incommoding," according to a statement released by the U.S. Capitol Police.

Meanwhile, others shared support for the demonstrators on Twitter:

The actions dovetail into a series of rallies, teach-ins and direct actions dubbed Democracy Awakening on April 16-18, during which more than 200 organizations representing hundreds of thousands of people will demand that Congress fill the vacant Supreme Court seat and pass legislation that restores voting rights and reforms the campaign finance system.

"This could be a moment that could turn the tide," Newkirk said.

The "vast majority of people in our country" agree that the political system is not representing us, he added. "It is corrupt and because of that we have a rigged economy. We want a government that is of, by, and for the people—not the one percent. And we stood up and sent a message that we are going to win that, one way or another."