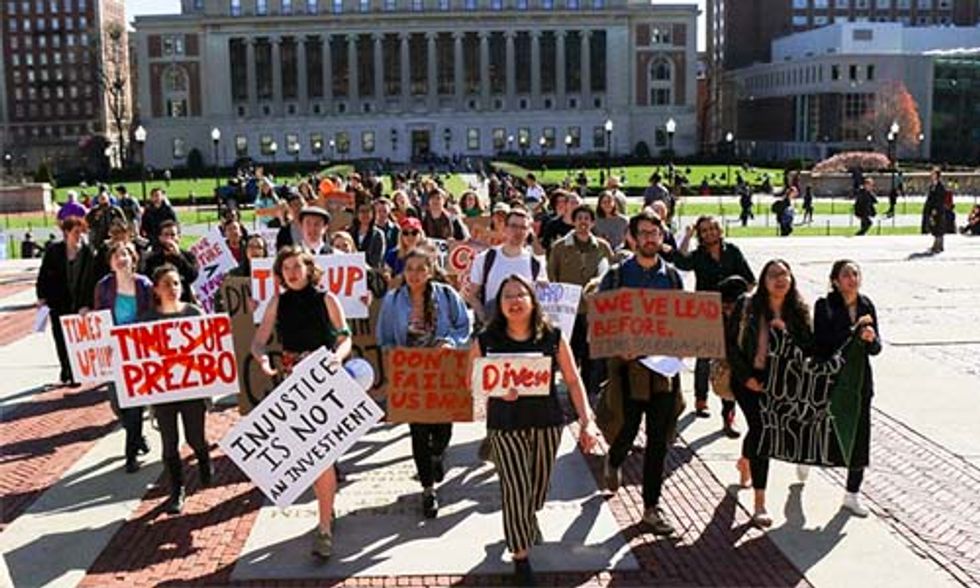 As students across the country engage in nonviolent direct action calling on their administrators to divest from fossil fuels, calling out conflicts of interest embedded within their decision makers over the last two weeks.

Kicking off the month of action last Wednesday, students at Swarthmore College with Swarthmore Mountain Justice took action outside their board member’s off-campus office, calling out the personal financial ties that she and other board members have in the fossil fuel industry.

Students with Divest UMass at the University of Massachusetts-Amherst are in their sixth day of a sit-in that has already resulted in the arrests of 34 students and garnered endorsements from Sen. Benjamin Downing, legislators Sen. Jamie Eldridge and Rep. Marjorie Decker, numerous academic departments and faculty members and presidential candidate Jill Stein.

“Four years after first launching our campaign, over 100 UMass students, faculty, alumni and community members are sitting in to call on our university to divest from all fossil fuels," Mica Reel, a student at the University of Massachusetts-Amherst, said.

Following the announcement that Chairman Woolridge and President Meehan would publicly endorse the students’ demands, the campaign announced that it would continue taking action until administrators took action in the form of a proposal moving forward divestment. More than 500 students, faculty, alumni and community members having participated in their action over the past several days.

Exactly one year to the day that four students were arrested in protesting for fossil fuel divestment, the University of Mary Washington committed to divesting 98 percent of its endowment from the top 200 fossil fuel companies, making it the first public university in the South to divest.

After five years of public pressure to divest their $25.6 billion endowment from fossil fuels, Yale University became the first Ivy League to move towards divestment, taking initial steps of divesting $10 million from coal and tar sands. Just one year ago, Yale administrators’ refusal to consider divestment culminated in the arrest of 19 students.

Exactly one year since students participated in Harvard Heat Week, a week-long sit-in outside Massachusetts Hall, four students with Divest Harvard at Harvard University were arrested for sitting in at the Federal Reserve Bank building, home to the offices of the Harvard Management Company.

“A number of schools have already divested from fossil fuels. Meanwhile, Harvard hasn’t divested at all," Jonathan Hiles, a student at Harvard University, said.

"Instead it’s making a large investment to support struggling fossil fuel companies and get them back to business as usual disrupting the climate. Harvard Management Company is contributing to the climate crisis even as it threatens to submerge parts of Boston within our lifetimes.”

On Thursday, in the wake of arrests at UMass and Harvard and a victory on divestment at Yale, students launched a sit-in at Columbia University outside of the office of the president of the university, calling on President Bollinger to meet with them immediately and issue a statement in support of divestment.

This wave of on-campus escalation will continue over the next month with actions at Bowdoin College, the University of Montana and more. In just three weeks, the global fossil fuel resistance movement will participate in Break Free, an unprecedented global mobilization to demonstrate the global resolve to transition off fossil fuels and build the new kind of economy that we know is possible—one centered on a just transition to 100 percent renewable energy now.