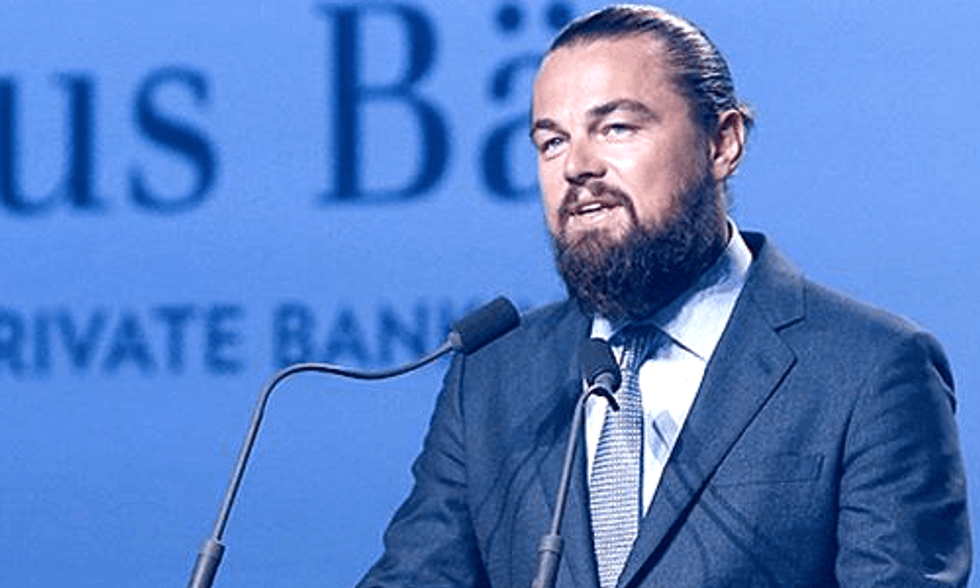 The Leonardo DiCaprio Foundation (LDF) raised a staggering $40 million to protect endangered species and help preserve the environment at the actor and environmentalist's second annual fundraising gala in St. Tropez, France on Wednesday.

Giorgio Armani sponsored last night’s annual auction gala held by the “Leonardo DiCaprio Foundation” in St. Tropez, raising over $40 million in support of the foundation’s environmental programs. Host of the evening Leonardo DiCaprio was joined by Orlando Bloom, John Legend (all wearing #GiorgioArmani) and Chrissy Teigen, amongst other guests.

“Tonight’s event is about supporting LDF's efforts to protect key species like the tiger, rhino, shark and mountain gorilla by working with governments to conserve the jungles, coral reefs and forests they call home," DiCaprio told his star-studded guests during his opening speech.

"By focusing on protecting these critically-endangered iconic species is almost like setting up a worldwide network of Noahs arks. We’ve decimated our forests, wildlands, polluted and over fished our rivers and oceans; all the key ecosystems that not only serve as a home to our planet’s biodiversity, but also make life here for us possible. I’m incredibly proud to be part of a night that will allow us to do so much to protect the planet," he said.

My Foundation is focused on protecting critically-endangered, iconic species. Last night, we held an event to support our efforts to protect the #tiger, #rhino, #shark, and mountain #gorilla by working with governments to conserve the jungles, coral reefs and forests they call home. In a sense, we’re trying to set up a worldwide network of Noah’s Arks. A special thank you to our long-time partner Julius Baer for its continued support and dedication to protecting the Earth’s last wild places. To our co-sponsors @chopard & @armani - thank you! And, our appreciation extends to our #LDFoundation Global Fundraising Chairman Milutin Gatsby. #LDF (Photo credit: Getty)

"Such a honor to share the stage with the incredibly talented John Legend," Elton John wrote in an Instagram post. "And a joy to raise money to help save our planet for the Leonardo DiCaprio Foundation."

The $40 million haul nearly doubled the $25 million raised at last year's LDF gala. According to a release, the event featured a high-priced live auction that opened with Dicaprio's personal items up for bid: a Rolex Daytona Cosmograph watch and Andy Warhol and Bansky artworks from his personal collection. DiCaprio's donations raised close to $2 million.

Here were some of the other jealousy-inducing items on the auction block:

The "Wolf of Wall Street" star is no stranger to environmental causes. His eponymous foundation was founded in 1998 with the goal of protecting the world’s remaining wild places, restoring threatened ecosystems and preserving endangered animals.

Just last week, EcoWatch reported that the LDF donated $15 million in grants to more than 30 environmental organizations. The UN Messenger of Peace has also donated millions to protect our oceans and participated in the People’s Climate March.