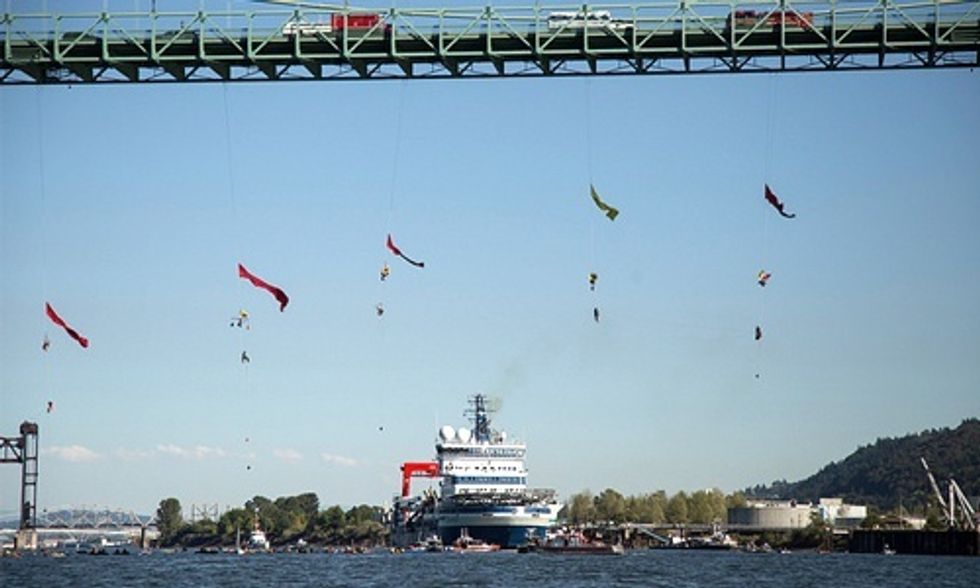 After a 40-hour blockade stopping Shell’s Fennica icebreaker from leaving port, 26 Greenpeace USA activists have come down from the St John’s Bridge in Portland, Oregon, including the 13 climbers that repelled from the bridge.

Shell's vessel did finally make its way on Thursday under the Portland bridge and out to sea as the demonstrators were preparing to leave the bridge.

A federal judge in Alaska yesterday ordered Greenpeace USA to remove the climbers or face a series of escalating fines, starting at US$2,500 per hour and reaching as high as US$10,000 per hour after a number of days.

“We are incredibly proud of these climbers and truly humbled by what they have achieved here in Portland," Greenpeace USA Executive Director Annie Leonard said.

"The last two days have been a very emotional experience for all of us at Greenpeace, as well as all those who supported this action around the country and the world. Between the kayativists, the streamers, and the blue sky we have seen something new emerge, a sign that we can stand up to one of the most powerful companies in the world if we work together."

Since Shell’s drilling fleet arrived in the Seattle area for repair to its damaged hull, a broad movement has emerged in the U.S. protesting the Obama administration's permitting of Shell's Arctic drilling plans. Earlier this month, people in 13 states gathered for a “ShellNo” Day of Action asking President Obama to revoke oil and gas exploration leases in the Chukchi Sea.

The Fennica is one of two primary icebreakers in Shell’s drilling fleet, and is equipped with a capping stack, which Shell is federally required to have on site in the Chukchi Sea. Until the MSV Fennica and the capping stack are on site in Alaska and Shell is granted federal drilling permits, the company can only drill top wells, thousands of feet above any projected oil, says Greenpeace.

"This was a historic achievement not just because it blocked Shell’s icebreaker from reaching the Arctic, but because it helped spark an even bigger movement of people to raise their voices for something they believe in," Leonard said.

“Drilling for oil in the Arctic Ocean would be a terrible mistake, and we call on President Obama to join the millions of people who are speaking with one voice to say it loud and clear: ShellNo."