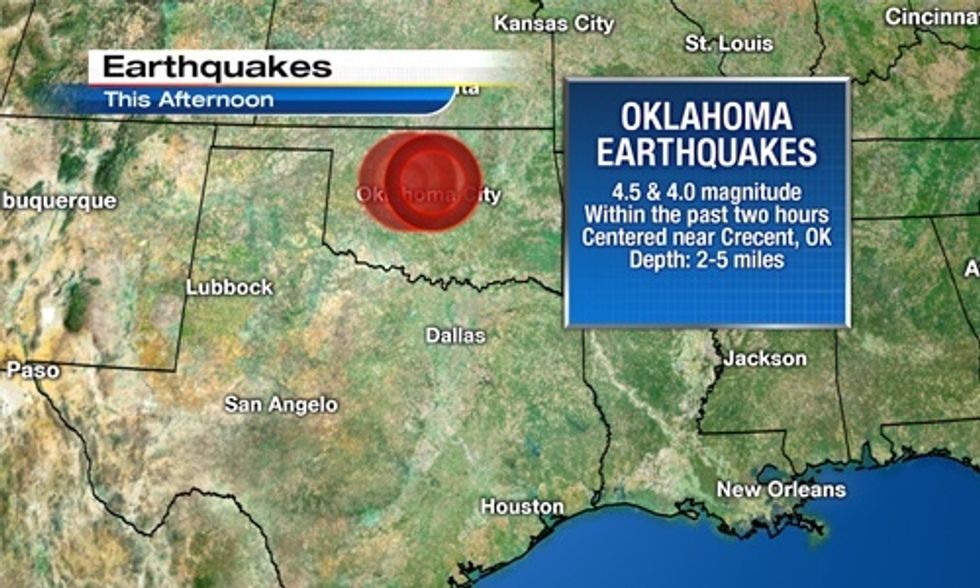 Yesterday Oklahoma recorded five earthquakes centered near Crescent, Oklahoma, some of which were felt in at least five states—Oklahoma, Kansas, Texas, Missouri and Arkansas. Three of the quakes measured above 4.0-magnitude and the biggest of these was a 4.5-magnitude earthquake, the strongest earthquake in the region since a magnitude-4.9 near Conway Springs, Kansas, on Nov. 12, 2014. The strongest magnitude earthquake on record occurred on Nov. 5, 2011 and registered as 5.6-magnitude.

Holy earthquake... Wow. Strongest one I have ever felt. #edmond #earthquake

Oklahoma has seen two sizeable earthquakes early this afternoon: 4.5 magnitude within the past hour. pic.twitter.com/vlCpnTgTfi

Big earthquake in Tulsa! Everything shook bad for 30-40 seconds. #earthquake

There was no reported significant damage from the earthquakes, but the rate of earthquakes in Oklahoma has increased by about 50 percent in the last two years, greatly increasing the chance for a damaging quake, according to the USGS. There have been eight quakes of magnitude 3.0 or larger near Crescent since Saturday and during the past seven days, Oklahoma has experienced about 40 earthquakes.

"Noticeable quakes—above magnitude 3.0—now hit the state at a rate of two per day or more, compared with two or so per year prior to 2009," reports Reuters.

It's going to be news now when there's NOT an #earthquake in #OK. Earlier 4.5m revised down to 4.1m, 4 miles NNE of Crescent, OK #OKC #Tulsa

This spring scientists confirmed that the state's recent uptick in fracking activity has led to a dramatic increase in earthquakes in the state, citing the injection into deep underground wells of fluid byproducts from drilling operations as the culprit. “Oklahoma experienced 585 magnitude 3+ earthquakes in 2014 compared to 109 events recorded in 2013,” according to the state's website, Earthquakes in Oklahoma.

The number of earthquakes has risen dramatically in recent years along with the rapid increase in fracking infrastructure in the state. Photo credit: Earthquakes in Oklahoma

Last month, two more studies confirmed that the massive increase in seismic activity is linked to the state's fracking boom. And Oklahoma may have surpassed California as the number one state for earthquakes, but it's not alone in its dramatic increases in earthquakes. The U.S. Geological Survey has identified eight other states that have seen more frequent and higher magnitude quakes, as well, including neighboring New Mexico, Colorado, Kansas and Arkansas.

In response to the findings, the Oklahoma Corporation Commission Oil and Gas Conservation Division issued new directives this month expanding "Areas of Interest," parts of the state that have been worst-hit by the quakes, and adding restrictions for 211 disposal wells. In March, the state required 347 wells to reduce their injection depths to above the Arbuckle formation because "there is broad agreement among seismologists that disposal below the Arbuckle poses a potential risk of causing earthquakes," says the state.

“The Coordinating Council on Seismic Activity continues to evaluate and discuss what next steps should be," said Michael Teague, Oklahoma secretary of energy and environment. "The Coordinating Council discussed the possibility of reducing injection volumes [of fracking fluid] in the near future, as recommended by recent scientific studies, as a potential next step.”