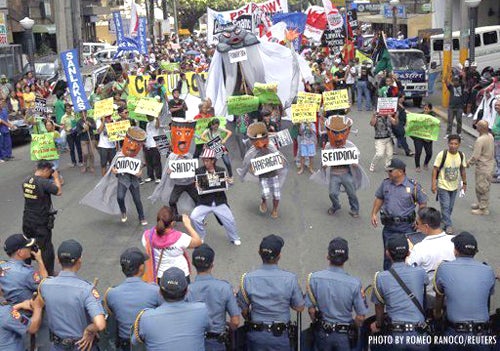 Solidarity actions are taking place in more than 40 communities around the world protesting dirty energy and spotlighting an urgent need to address the climate crisis during the week of action Nov. 14 to Nov. 20. Following a summer of unprecedented extreme weather and the devastation wrought by Hurricane Sandy the Tar Sands Blockade, a sustained direct action campaign based in Texas against the Keystone XL tar sands pipeline, has called for this week’s actions.

The closing of the hottest year on record and this summer’s dangerous extreme weather demonstrate that communities all across the world are already experiencing the effects of a rapidly destabilizing climate system. These actions are part of a burgeoning movement of activists who are self-organizing in their neighborhoods, schools and community centers to draw the connections between the ever-more reckless extraction of energy by the profit-driven fossil fuel industry and climate impacts already on their doorsteps. They are building the resilient and resistant communities needed to ensure all people and the planet are healthy and thriving.

Climate change continues to put a disproportionate burden on low income communities and communities of color around the world, and this weeks events highlight this struggle as locals rise up to defend their homes from climate chaos. These events serve as a reminder that we are part of a growing movement to demand climate action. Get ideas for your own local action here.

“Communities around the world are working together to expose the threat that the fossil fuel economy poses to families everywhere,” said Arielle Klagsbrun of Missourians Organizing for Empowerment and Reform. “As extractive industries grow increasingly desperate for profits, corporations like Peabody Coal and TransCanada are resorting to the most dangerous of energy reserves, like hydro-fracking, tar sands exploitation and mountain top removal coal mining.”

On Nov. 14, nine members of Rising Tide Vermont interrupted a Shell Oil executive while he was speaking on a panel about Big Oil in the Niger Delta. Activists shared testimony from Niger Delta community members suffering the impacts of Shell Oil operations on their homeland. Shell Oil has a long-standing relationship with Nigeria’s various military dictatorships and has been implicated in the genocidal devastation of ecosystems and communities in the Niger Delta. They also read statements from members of communities in Nigeria, Alberta, facing toxic tar sands extraction. 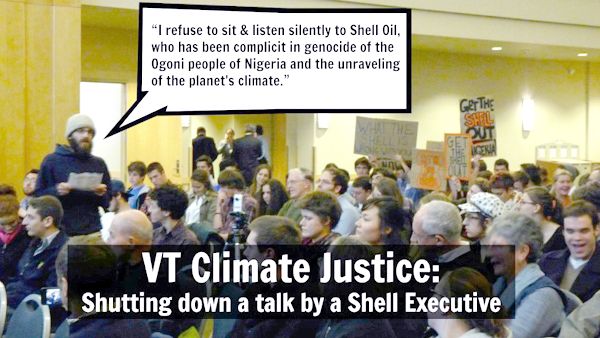 On Nov. 14, more than 30 people gathered in Helena, Montana’s Constitution Park to support the venerable U.S. tradition of civil disobedience. Immediately before an omnibus court hearing for the 23 people arrested during last August’s peaceful protests against coal exports at the Montana State Capitol in Helena, the group gathered with signs reading “Support the Coal Export Action 23” and “No More Coal Exports.” Several people addressed the crowd, including some of the 23 who had been arrested in August. “I came to Helena, to my own statehouse and got arrested because it looks to me like there is no more time for writing reasoned letters to the editor or having meetings with the politicians,” said Linda Kenoyer, describing why she participated in last summer’s civil disobedience. “The time has come to put my body on the line, to risk my safety and clean record if that’s what it takes to get someone’s attention.” View more photos and read about the action on Coal Export Action’s blog. 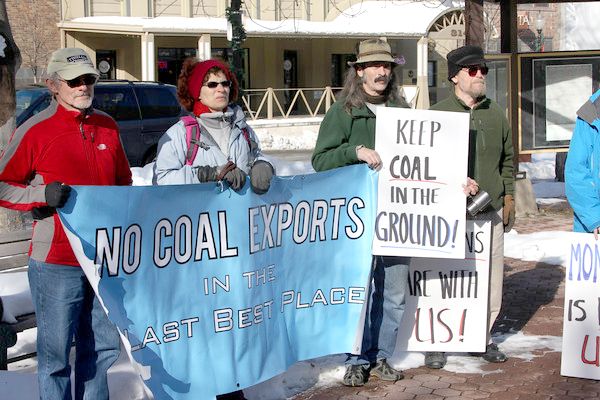 On Nov. 14, hundreds marched through the streets of Manilla, Philippines toward the U.S. Embassy to call for urgent action on climate change. Rising sea levels caused by climate change are a matter of survival for the thousands who live along the coastline of this island nation. Marchers connected the dots on climate change and other climate super powered storms like Hurricane Sandy with their signs. The march featured street theater and giant puppets organized by the Philippine Movement for Climate Justice as part of the Global Week for Climate Justice, which listed Tar Sands Blockade’s Mass Action on Monday Nov. 19 as part of their global week of action. 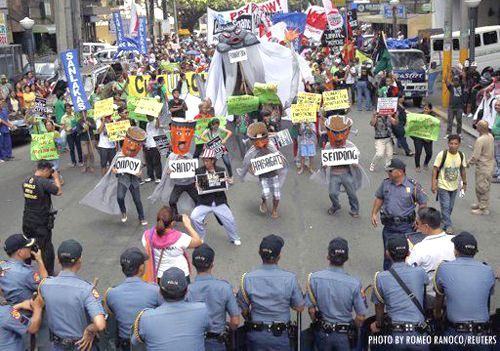 On Nov. 15, four people were arrested for shutting down an American Petroleum Institute luncheon in the Roosevelt Hotel in New Orleans, Louisiana. Yesterday’s action, in solidarity with Tar Sands Blockade, was in response to Hurricane Sandy and the newly approved Parkway Oil Pipeline that would endanger the cities beloved Lake Pontchartrain. New Orleans residents understand what the impacts of climate change mean for the health and safety of their community. The climate super powered storm of Hurricane Sandy serves as an all too familiar reminder of the devastation these more frequent storms will bring to the most vulnerable families around the globe. Yesterday, more than a dozen organizers marched in the streets and shut down the American Petroleum Institute’s luncheon to protest Big Oil’s stranglehold on our economy and our livable future. They chanted: “No pipeline! No tar sands! No destruction of Louisiana land!” 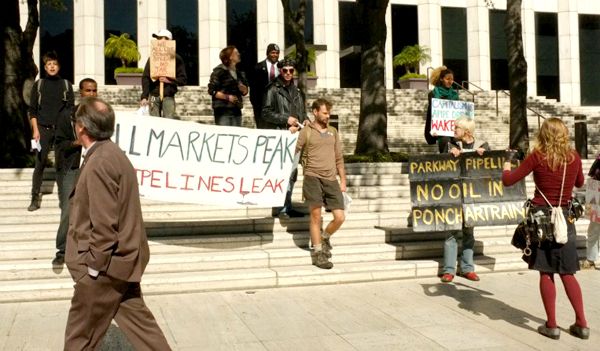 Here is a sampling of upcoming events this week:

Saturday, Nov. 17: Occupy Sandy and Stop Spectra Pipeline Coalition takes action to respond to the devastation of the climate super powered storm, Hurricane Sandy and put an end to hydro-fracking.

Sunday, Nov. 18: More than 3,500 people are expected to rally at the White House to call on President Obama to reject the permit for the Keystone XL northern segment. Event organized by 350.org, Sierra Club and other allies.

Monday, Nov. 19: Dozens of community members will rally in Nacogdoches, Texas to oppose the construction of the Keystone XL tar sands pipeline from endangering their homes. Tar Sands Blockade will be taking nonviolent direct action to halt its construction.

Monday, Nov. 19: Residents of Salt Lake City are performing theatrical exhibitions outside the Bureau of Land Management for its approval of public lands for the first tar sands mine in the U.S. Event organized by Peaceful Uprising and Utah Tar Sands Resistance.

“It’s encouraging to see these solidarity actions spring up across the globe in response to the escalating devastation of climate change,” said Nicole Browne of Tar Sands Blockade, who helped put out the call for the solidarity actions. “From the Alberta tar sands to the forests of East Texas and all around the world, these actions give hope to people everywhere who are defending their homes from reckless energy extraction that is fueling climate chaos.”

Clearly widespread adoption of renewable energy must be a top priority for all nations. Help encourage the U.S. Congress to expedite renewable energy by signing EcoWatch’s petion that demands our leaders take seriously the energy and climate crisis, and immediately work to implement the policies to move our country toward a sustainable future.