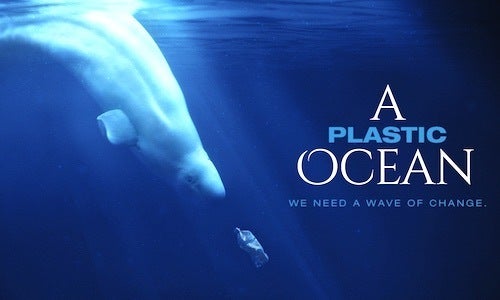 In the upcoming feature-length documentary, A Plastic Ocean, two explorers set out on a four-year global journey to learn about the increasingly devastating crisis of ocean plastic that has polluted our waterways, literally choked aquatic life and could spell major consequences for human health.

The film follows director Craig Leeson and world-class free diver Tanya Streeter as they explore the fragile state of our oceans alongside an international team of scientists and researchers. They traverse to 20 locations around the world, including the five major ocean gyres. In the Pacific Ocean gyre, for instance, the researchers found more plastic than plankton in the notorious Great Pacific garbage patch.

That revelation, sadly, is unsurprising. EcoWatch has extensively covered the problem of ocean plastic and marine debris. This escalating plastic minefield—about 8 million metric tons of plastic are dumped into the world’s oceans every year—affects everything from microscopic plankton to giant whales. A study last year estimated that plastic trash can be found in the majority of all species of seabirds. A report published last month also warned that there will be more plastic than fish in the ocean by 2050.

Ocean plastic, regrettably, results from human behavior. “The biggest message of this film is that everyone, everywhere, was sold a dishonest marketing concept: that we could use plastic, throw it away and it would be gone forever,” Leeson said in an interview. “And what we want everyone to understand is that there is no ‘away.'”

“Plastic is the most durable material man has ever made and every piece ever produced is still on the planet in some shape or form,” he continued. “Given that we are producing more than 300 million tonnes a year, you can see how that is building up in to a problem that is going to affect our planet, other species and our the health of each one of us.”

A Plastic Ocean also explores how larger pieces of plastic break up into microplastics that can move up the food chain and present a potential threat to us.

“I think the most powerful information is the human health factor,” Streeter said. “If people understand that the same issues that offend them (plastic on the beach) and distress them (animal’s entangled) also extend to people, in terms of the toxins that are building up in our bodies because of all the different ways in which we are exposed to it, that will encourage change.”

“We’ve treated the ocean as a place to throw things—dispose of things—that we did not want close to where we thought we lived. Actually, the whole planet is where we live,” Dr. Earle said.

The global nonprofit Plastic Oceans helped assemble the team of scientists and filmmakers to produce A Plastic Ocean with the aim of communicating this growing plastic crisis to the world. According to The Times of London, the organization seeks to create the first research center dedicated to studying the problem of plastic.

“A film that explains the problems about plastic … that message can be spread by a film like this in a remarkable way,” Sir Attenborough says on the Plastic Oceans’s website.

A Plastic Ocean will be out later this year and is currently seeking worldwide distribution. A trailer of the movie was released this week. Watch below: