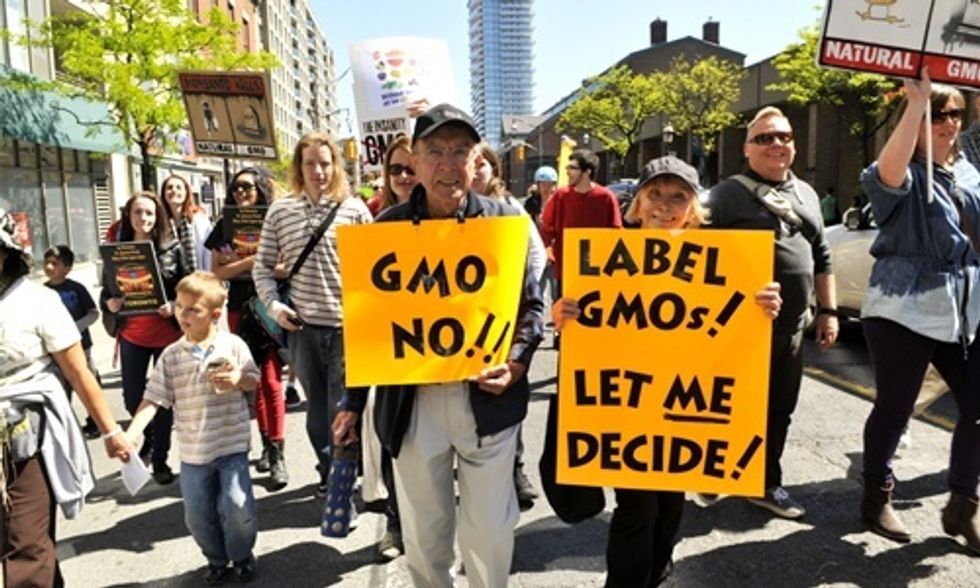 "Something is going to happen. If you’re not at the table, you’re on the menu."

So we were told recently by a Senate staffer, during one of the many meetings we’ve held with Senators to urge them to reject H.R. 1599 or what we refer to as the DARK—Deny Americans the Right to Know—Act.

Could that comment mean Monsanto is cooking up another “sneak attack,” similar to the one it conducted in 2013, that led to passage of the Monsanto Protection Act? Only this time, the sneak attack would be aimed at stomping out the GMO labeling movement?

Protesters walking in a rally with signs asking to "label" GMO's on food, against GMO giant Monsanto on May 25, 2013 in Toronto, Canada. Photo credit: Shutterstock

It wouldn’t surprise us. A quick look at the lay of the land reveals that Monsanto and Big Food have several opportunities to rush the DARK Act into law, without a hearing or a full vote in the Senate.

How likely is that to happen? We don’t know for certain. But it’s worth remembering that Monsanto and Big Food are nothing if not opportunists.

A Bill to End GMO Labeling for Good

The bill is a sweeping attack on states’ rights to self-govern on the issue of GMO labeling and on consumers’ right to know if their food has been genetically engineered. If the Dark Act becomes law, there will never be GMO labels, safety testing of GMOs, protections for farmers from GMO contamination or regulations of pesticide promoting GMO crops to protect human health, the environment or endangered pollinators.

Under what most of us would consider a fair and democratic process, the bill would move next to the Senate, where there would be the opportunity for debate, amendments and a stand-alone vote.

But with the July 1, 2016, enactment of Vermont’s GMO labeling law, Act 120, looming, Monsanto is probably thinking it doesn’t have time to slog through a Senate hearing and stand-alone vote, especially as the Senate has yet to introduce its own version of the bill. And perhaps even more daunting than the July 1 deadline, is the prospect that the DARK Act might get watered down or worse yet killed in the Senate—a risk Monsanto would likely prefer to avoid.

So, what are the potential “sneak attack” scenarios that would allow Monsanto to push through the DARK Act this year, without going through the normal Senate process?

There are several. They all take advantage of the fact that Congress is seriously behind on its work and that the threat of a government shutdown looms.

When Congress leaves its must-pass legislation to the last minute, bills don’t go through the normal legislative process where votes and amendments take place in committee hearings and floor debates. Instead, bills are negotiated behind closed doors, then, to increase the likelihood they’ll pass, brought to votes with only limited debate and amendments.

In a skit titled “You Stuck What Where?” the Daily Show’s Jon Stewart described how this last-minute legislating makes it easy for lawmakers to sneak provisions into bills, with no accountability:

It turns out, members of Congress involved in writing a bill while the bill is in subcommittee, are allowed to add any provision they want, anonymously. No fingerprints. The laws of the most powerful nation are written with the same level of accountability as internet comments.

This year, Congress could procrastinate until December and then cram all of its must-pass legislation into one “grand bargain.” This would be the perfect opportunity for Monsanto to launch a “You Stuck What Where?” sneak attack. We might not even know until it’s too late, if unscrupulous House and Senate leaders were to slip the DARK Act into a “grand bargain” that included appropriations, reauthorizations, extensions of expiring legislation and an increase in the debt ceiling.

But, even if these bills are dealt with individually, there’s still ample opportunity for sneak attacks.

How could Monsanto sneak the DARK Act into law? Here are what we believe are the scenarios industry lobbyists are probably considering.

1. They’ll sneak it into a must-pass spending bill.

The government needs to be funded by Sept. 30. But Congress is way behind in its work on its spending bills. Not a single one of a dozen annual appropriations bills has passed both chambers yet this year. That increases the likelihood that lawmakers will try to pass another Continuing Resolution to keep spending at basically the same level as last year and keep the government open.

This would give Monsanto a chance to launch the same “sneak attack” strategy it used in 2013, when the Monsanto Protection Act (Monsanto called it the Farmers Assurance Provision) was slipped into a six-month Continuing Resolution cobbled together at the 11th hour to avert a government shut-down.

Sen. Roy Blunt (R-Mo.) played a big role in the 2013 Monsanto Protection Act “sneak attack.” He could do it again with the DARK Act, especially if he convinces Sen. Thad Cochran (R-Miss.), Chairman of the Senate Appropriations Committee, to help him.

The only question for Monsanto is if the Continuing Resolution will last long enough to block the July 1, 2016 implementation date of Vermont’s new GMO labeling law. Continuing Resolutions are normally short-term, 3 months or as long as 6 months. This wouldn’t help Monsanto.

But, Congress may choose to meet its end-of-the-fiscal-year deadline (Sept. 30) by passing a full-year continuing resolution. If this happens, any riders that get attached to the resolution would have a twelve-month lifespan. That could mean a DARK Act that would delay the implementation of Vermont’s GMO labeling law.

2. They’ll sneak it into the Child Nutrition Act Reauthorization bill.

On Sept. 17, Sen. Pat Roberts (R-Kan.) brought the Senate version of the Child Nutrition Act Reauthorization bill to his committee for amendments, debate and vote. The Child Nutrition Act expires on Sept. 30 and should be reauthorized before then for another five years. But, as with the spending bills, if Congress doesn’t finish its reauthorization work it can opt for a short-term extension.

If Sen. Roberts, who chairs the Senate Agriculture Committee, wanted to do a favor for his Big Ag donors who have given him nearly $800,000 so far this election cycle, he could let Sen. Blunt slip the DARK Act into the Child Nutrition Act. There would be little anyone could do about that, unless they were willing to risk the future of the school lunch program past Sept. 30, when the legislation expires.

If Monsanto can’t get Sen. Roberts to act alone, the other Senators on the Agriculture Committee could be enlisted in a team effort. With a two-person majority, the committee’s 11 Republicans could vote to attach the DARK Act to the Child Nutrition Act Reauthorization without any Democrat’s support.

3. They’ll sneak it into another bill as an amendment

If Monsanto doesn’t manage to stick the DARK Act into an appropriations or reauthorization bill anonymously, it can try for an amendment to one of these bills, once either of the bills hits the Senate floor.

Senate Majority Leader Mitch McConnell (R-Ky.) hasn’t been given $1.1 million from agribusiness so far this election cycle for nothing. Monsanto and its allies know that the DARK Act could live or die depending on how important it is to Sen. McConnell. As the Senate Majority Leader, he controls which bills go to the floor and which amendments may be offered.

If the DARK Act doesn’t get attached to another piece of legislation by a committee chair or by a vote in committee, it could be brought to the floor as stand-alone legislation. This rarely happens in the Senate, because it takes 60 votes (a bipartisan effort) to cut off debate and avoid a filibuster.

But amendments to legislation are different. An amendment requires only 51 votes to pass—as long as the amendment is germane. (Non-germane amendments require 60 votes.) Of course, what’s “germane” is largely up to the Senate Majority Leader.

The ability to wield these parliamentary tactics gives Sen. McConnell enormous power and will make him the top target of Monsanto’s lobbying machine.

4. They’ll sneak it into the budget reconciliation bill.

The President's Fiscal Year 2016 budget passed by Congress earlier this year allows for a “budget reconciliation” bill to be considered and passed by majority vote—only 51 votes in the Senate. The bill can also be amended with only 51 votes.

For Monsanto’s sneak attack strategy, the catch is that, under the rules of this reconciliation, the underlying provisions of a reconciliation bill must have a “budget effect.” It’s very difficult to imagine Monsanto being able to make the case that passing the DARK Act could save the government money. However, the rule can be broken with 60 Senators voting to override an objection.

The “budget reconciliation” bill is optional, so it’s likely that Congress won’t act on it until 2016.

When it comes to the DARK Act, will consumers be at the table? Or, as our Senate staffer friend suggested, on the menu? We don’t know yet. But we do know which Senators might be able to give Monsanto a hand with a “sneak attack.”