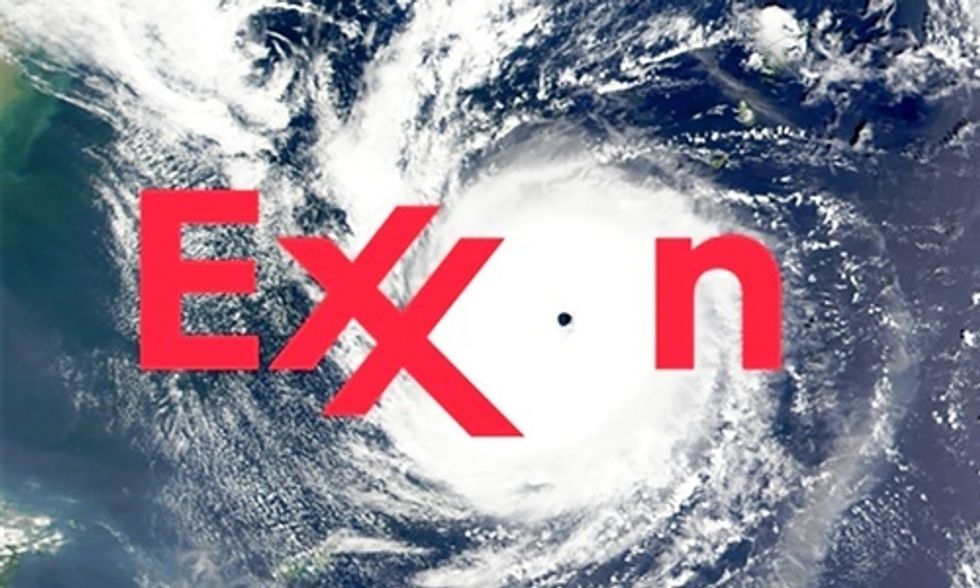 In the last few months, exposé after exposé has uncovered how Exxon knew about the dangerous reality of climate change before the media, politicians and just about everyone else. But instead of doing the right thing or even just sitting on its evidence, Exxon did something much more insidious. It tried to hide the truth from all of us.

Exxon has known about the dangerous reality of climate change for decades. Photo credit: Greenpeace International

As we approach COP21, a global meeting to address the climate crisis, let’s take a look back on four examples of how far Exxon has gone to stop climate action:

1. That Time Exxon Learned in 1982 That Climate Change Would Lead to Environmental Catastrophe

As early as 1977, Exxon’s own scientists were researching human-caused global warming. Exxon dedicated a substantial research budget to studying carbon emissions, developed sophisticated models and published its findings in peer reviewed journals. By 1982, an internal company report told Exxon management “there are some potentially catastrophic events that must be considered … Once the effects are measurable, they might not be reversible.”

So Exxon knew. But instead of acting to protect the planet, Exxon acted to protect its profits. It spent the next three decades funding and spreading climate denial. Exxon funded groups like ALEC, the Heartland Institute and the Advancement of Sound Science Coalition—all of which ran successful public climate denial campaigns. The Advancement of Sound Science got its start challenging the dangers of secondhand smoke, so climate denialism wasn’t a big stretch. And ALEC—a climate-denying front group that peddles its pro-corporate legislation to U.S. statehouses—spread misinformation so egregious that Shell’s investors forced the oil giant to cut ties.

Now, the catastrophic events Exxon predicted are here. But Exxon continues to fund climate denialism to this day.

2. That Time Exxon Paid for a PR Strategy to Convince the World Climate Change Wasn’t Real

Of course, Exxon isn’t alone in funding and spreading climate denialism. In 1988, Exxon joined a group of fossil fuel companies and industry front groups organized by the American Petroleum Institute to create the Global Climate Science Communications Plan. The group spent $2 million dollars on a plan to get the average citizens and the media to "'understand' (recognize) uncertainties” in climate science and for these uncertainties become part of the “‘conventional wisdom.’” That “uncertainty” set the planet back decades in terms of climate change policy—and it’s one reason people who don’t believe in science can run for president in the U.S.

3. That Time ExxonMobil Got the U.S. to Withdraw From the Kyoto Protocol

For decades, Mobil—and then ExxonMobil—ran a weekly “advertorial” on the opinion page of the New York Times. After the 2000 election, these advertorials practically became a guidebook for the new Bush administration.

In January 2001, an Exxon advertorial called the Kyoto Protocol “unrealistic” and “economically damaging” because of its “fundamental flaws.” When President Bush gave his now-infamous June 2001 speech on climate change, he echoed Exxon—calling the policy “unrealistic,” “fatally flawed in fundamental ways” and said it would have had a “negative economic impact.”

The harm this caused to the planet is undeniable.

4. That Time Exxon Called the Current New York Attorney General Investigation Into Its Deception a “Distraction”

Tillerson sounds a lot like Tony “I’d like my life back” Hayward in the midst of the BP Deepwater Horizon spill. We can all sympathize with beleaguered CEOs in the middle of a corporate PR disaster, but the Exxon investigation is more than a distraction. The Attorney General is looking into Exxon’s history of misleading statements on climate change, to investors and to the public. California and the Philippines might be next and the public is clamoring for a federal Department of Justice investigation. Rex Tillerson and Dick Keil might be in denial, but Exxon’s woes aren’t going anywhere.

Typhoon survivors and civil society groups in the Philippines, delivered a complaint to the Commission on Human Rights of the Philippines (CHR), calling for an investigation into the responsibly of big fossil fuel companies for fueling catastrophic climate change that is resulting in human rights violations. Sept. 22, 2015. Photo credit: Greenpeace / Vincent Go

The truth is that ExxonMobil and other fossil fuel companies fueled climate debate for years knowing the harm it was causing. Join us and support an investigation into Exxon and other Big Oil companies now.