4 Things We Need to Do to Win the Climate Fight 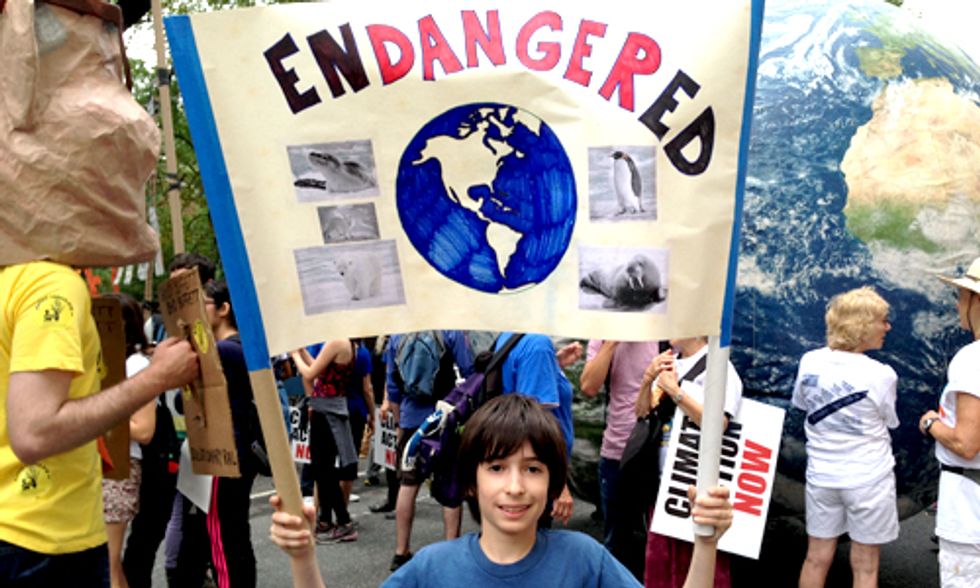 Okay, so we had this historic march a little over a week ago.

... joyous, beautiful, exhilarating, inspiring, life-confirming ... and in many ways a turning point.

Now that the dust has settled a bit, we can see that it will change things for a long time to come.
The People's Climate March brought 400,000 people to the streets of NYC demanding climate action. Photo credit: Stefanie Spear

It proved to ourselves and the world that we have a huge, diverse, broad-based movement. And that we can put aside our differences and all get along when we have to.

We are our species' ever-evolving immune system. We are the survival instinct that must defeat the corporate profit motive.

We've endured the circular firing squad and want it abolished.

Our hard-earned commitment to non-violence allows for a calm internal space and the great power that emerges from it. So in a diverse movement of good people with very strong opinions, we are learning to cut each other plenty of slack.

But how do we now build on this? What do we do next?

Politically, we operate at two essential levels: the local and the global.

1.  Local organizing is our ultimate source of power.

The green movement has the great luxury of tangible targets. The King CONG corporations (Coal, Oil, Nukes, Gas) need actual land on which to do their dirty work. So we can fight them inch-by-inch, at the source.

We can name scores of reactors that didn’t get built, did get cancelled, are now being shut, will soon be stopped.

There are also solar panels on rooftops, windmills generating power, electric cars in the pipeline, recycling programs in place, consumption reduced, the overall vision of a green-powered Solartopia becoming ever more tangible.

In this movement, “what can I do?” always has a ready answer: fight the polluter next door. Pick one and shut it down!

Some of these fights we may seem to lose, at least for the time being. But it’s never over until we quit, which our survival instinct won’t let us do. A polluter once opened can always be shut if we never give up.

So at the grassroots, we are the individual immune cells that fight toxic industrial poisons and cancerous trash at the source. That’s the revolution that’s not televised.

2. But our planet as a whole is now infected with a lethal mega-virus—the global corporation, a metastasized cancer that usurps human rights but shuns human responsibilities.

A toxic tumor that demands just one thing: a constant flow of dollars, don’t ask how.

If it can make an extra dime by killing the planet, it’s bound to do just that.

Big gatherings to fight this menace can be risky, divisive, diverting and expensive. They can come and go without apparent impact.

But they can also be amazingly effective, often in ways that are hard to see.

Last century, mass strikes built the labor movement. They withstood violent corporate/government assaults. Without them, we would have no unions.

In 1932 a “Bonus Army” was attacked by by Herbert Hoover. Two marchers were killed. It seemed a dismal failure. But it opened the door to the New Deal.

During World War 2 the mere threat of a mass march by labor leader A. Philip Randolph extracted major civil rights concessions from a reluctant Franklin Roosevelt.

LBJ and then Richard Nixon scorned the anti-war gatherings. But both were forced to resign, and Nixon (NEVER forget this!) said those marches stopped him from nuking Vietnam.

Civil disobedience at Seabrook, Diablo Canyon and other reactors prompted a flood of cancellations, and opened the door to Solartopia, a green-powered Earth.

Ronald Reagan scorned the millions who marched to freeze nuke weapons, but somehow went eight years without using one.

Bush/Cheney “ignored” 15 million marchers and attacked Iraq. But what more would they have done had we not marched?

Now millions have gathered against global warming.  And the day after, Barack Obama attacked Syria.

Did we fail?  Should we march again soon, this time with massive civil disobedience?

3.  As we work this through, there are inter-related issues we can’t avoid:

ELECTION PROTECTION demands universal hand-counted paper ballots, an end to Jim Crow vote theft and a ban on the corporate billions that poison what’s left of our democracy.

SOCIAL JUSTICE, including workplace democracy and a universal living wage, means we can all live and work with integrity, no matter our diverse religions, race, gender, sexual preference, etc. Poverty is an unsustainable form of planet-killing pollution.

All these difficult issues are essential to the health of our species. We don't get to a green-powered Earth without bringing them with us.

4. For each of us there’s also a deep internal dimension to this work. Being an activist is itself a great leap of faith. It can have a long list of personal costs.

But the rewards—spiritual, of the heart, in terms of inner peace—can be incomparable.

If undertaken in good faith, and with success, the ability to do movement work can be one of life’s great gifts. Amazing joy can come with saving our only home.

After all, we are seven billion sentient beings, thinking and breathing together, inseparable from each other and the planet that gives us life.

One way or another, our Mother Earth lets us know how to undo the damage done by our baser instincts. Our greatest test now is to cure the cancer of the global corporation.

To fight it, we might listen to our gut instincts, accept what we’re good at doing, heed our natural passions, respect our comfort zones, heal in concert with our fellow citizen who are struggling to do the same. As the good Dr. Spock once told the young mothers of a new generation, "you know more than you think you know."

No victory is too small to count, no polluter is too big to beat.

As we saw on this march, and in so much else we do, when we fly with non-violence and consensus, our living planet gives us generous margins.

So the specifics of our next moves are up for a good, healthy debate. But we all know we have no choice but to win.

And that as we work our newfound power toward joyful agreement, and a peaceful trust in the will of our species to survive, we cannot fail.

Harvey Wasserman wrote SOLARTOPIA!  OUR GREEN-POWERED EARTH and edits www.nukefree.org.  His SPIRAL OF OUR HISTORY is in progress.