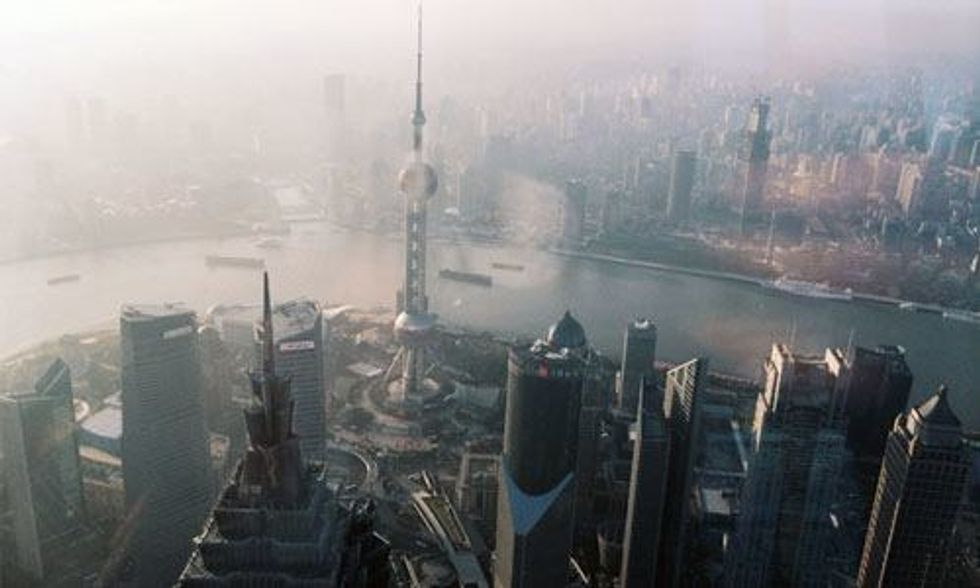 The fossil-fuels crowd seems to have a thing for China and India. It feels like at least in the U.S., at least half the discussions of clean energy and climate change you see on television end with the anti-renewable voice saying, “Well what about China and India? It doesn’t matter what we do if they keep polluting.”

The world’s first largest economy, China, is stepping up its commitment to renewable energy and working to peak its carbon emissions by 2030.

The rest tends to go to script as, almost without fail, a satisfied smirk the size of Texas then creeps into view as our fossil-fuels friend then leans back in his or her chair. Job done. Mission accomplished. Time to head home and light up a victory-lap Cuban.

But here’s the thing. When we think about the biggest reasons for hope that humanity is finally getting its act together to protect this precious planet of ours from climate change, what comes to mind isn’t the Gigafactory that Tesla CEO Elon Musk is building to revolutionize electric vehicles and energy storage. Or how Costa Rica is committed to going carbon-neutral by 2021. Or the fact that Norway is dropping coal investments from its sovereign wealth fund.

The world’s first and third-largest economies in 2015 (measured by purchasing power parity) are both stepping up their commitment to renewable energy and China in particular is also working to peak its carbon emissions by 2030—and aiming to do so sooner. Maybe the most exciting part of all is the fact that this choice isn’t driven by any kind of misguided idealism. It’s a clear-eyed business decision made by leaders looking at the realities of fossil fuels and what they mean for the health of millions of citizens and their respective economies – and recognizing that clean energy is the smart long-term bet.

Admittedly, China’s further along this path than India and both have some ways to go before their power plants are no longer belching dirty coal soot and carbon pollution by the metric ton. But when nations of this size and aspiration begin shifting to new models of development increasingly powered by renewables and seeing it pay off as their economies keep growing, it sends a clear signal to other emerging countries that clean energy can work.

After highlighting some of the countries with a track record of embracing renewables and flourishing today we’re looking at how recent converts to the clean-energy cause are showing over and over that the way to economic success in the twenty-first century is powered by smart technologies like wind and solar. So the next time someone says, “Well what about China and India,” you can say, “Well let me tell you about China and India. And Brazil and Mexico too ...”

Let’s start by addressing the elephant in the room right up front: China’s powered much of its remarkable growth in the twentieth and twenty-first century with fossil fuels. So much so that it’s poised to catch up with the US on the list of all-time historical carbon polluters before too long (which does beg the question, does the fossil fuel crowd in China try to end debate with the question, “Well what about the Americans?”).

That said, in recent years, China has become a renewable-energy juggernaut, moving full-steam ahead and showing no signs of slowing down anytime soon. Without the space to single out everything happening in a nation of about 1.4 billion, a few headlines really stand out:

We’ve made this point before, but China is choosing to do all of this—and a whole lot more—as the world’s largest economy. With the lives and well-being of nearly 1.4 billion people on the line. And if that’s not proof that clean-energy can work on a massive scale—and that’s before counting all the health and other benefits of addressing climate change in the near term—then nothing could be.

India hasn’t always made the right kind of headlines when it comes to climate change, thanks to the serious amounts of coal powering its economy—and air pollution choking its cities. But what many critics overlook is how the nation is also making some very ambitious commitments to renewable energy. Two things India has going for it are abundant natural resources (read: “lots and lots of sun and wind”) and a strong entrepreneurial culture  with a habit of seizing big growth markets. Meanwhile, Prime Minister Narendra Modi has made solar an integral part of the government’s efforts to end energy poverty and bring electricity to every Indian household, including the 300 million people currently living without it. Some clear indicators of this progress include:

To propel these efforts, the Indian government has also introduced a range of forward-looking policies that mandate reductions in energy use from large industries and encourage state electricity providers to use renewables, among other measures. And while there’s no way around the fact that the nation clearly has a long ways to go, the fact that real progress is happening in a nation of India’s size and footprint is a real reason for hope.

The clean-energy turnaround stories happening in China and India aren’t the only ones pointing to an ongoing shift in global attitudes. Though its noisy neighbors to the north tend to hog the spotlight when it comes to climate news, Mexico has quietly been building the second-largest clean energy market in Latin Americawhile making strong commitments to reducing greenhouse gas emissions. Along the way, it’s also been reforming its electricity sector to pave the way for significantly greater use of renewables in the years ahead.

What does this all mean in practice? Well, one research firm ranked Mexico second in Latin America for solar installations in 2014 and forecasted that the sector would grow by 84 percent through 2018. The country has also set ambitious goals to grow domestic wind power from just over 2,500 MW of capacity last year to 15,000 MW by 2022. Which is not a small undertaking.

Of course, if you want to get a real picture of what’s happening, follow the money (we’ve heard that’s a smart idea). And in Mexico, the money is moving into clean energy, with investors first putting $2.2 billion into renewables in 2013 and then adding $1.3 billion more in just the first six months of 2014. Fueled by this support, developers are busy working on a range of clean energy projects in areas from biofuels to geothermal to small hydropower to solar to wind.

From the second-largest clean energy market in Latin America to the largest: Brazil. While many countries in the region have looked to fossil fuels or foreign resources to power their economies, Brazil has a long history of working for self-sufficiency and using its own natural resources. The result is that the nation has been able to supply over 80 percent of its electricity needs with renewables, with the bulk coming from hydropower.

Admittedly, large-scale hydropower is not without its own issues and so the good news is that other sectors like wind and solar are starting to really pick up in Brazil. Already, the nation was one of the top 10 globally for clean energy investment in 2013. Plus, wind, to pick just one sector, could reach 12 percent of the nation’s generation capacity by 2023 if Brazil meets its current goals. And with Brazilian President Dilma Rousseff recently pledging that the country will generate 20 percent of its energy with non-hydropower renewables by 2030, there’s every reason to expect it will.

Perhaps most importantly, while Brazil was creating a low-carbon economy, it was also living through a decade of extraordinary growth and social progress from 2003—2013 in which over 26 million people emerged from poverty and the country made major strides in reducing inequality.

The bottom line is that we’re seeing countries in every part of the world and all along the economic spectrum increasingly turn to clean energy and thriving as a result. So while the recent headlines on what’s happening in Greenland and Antarctica make for some sobering reading, places like China and India and Mexico and Brazil are proving that we can make smart decisions on how we power our lives without plunging our economies into chaos, like the fossil fuel crowd would have you believe. And that’s a reason for hope worth sharing.

Want to keep up with the latest in developments on clean energy and climate action as we move closer to a global agreement in Paris? Sign up for the Climate Reality email activist list and we’ll keep you in the loop.