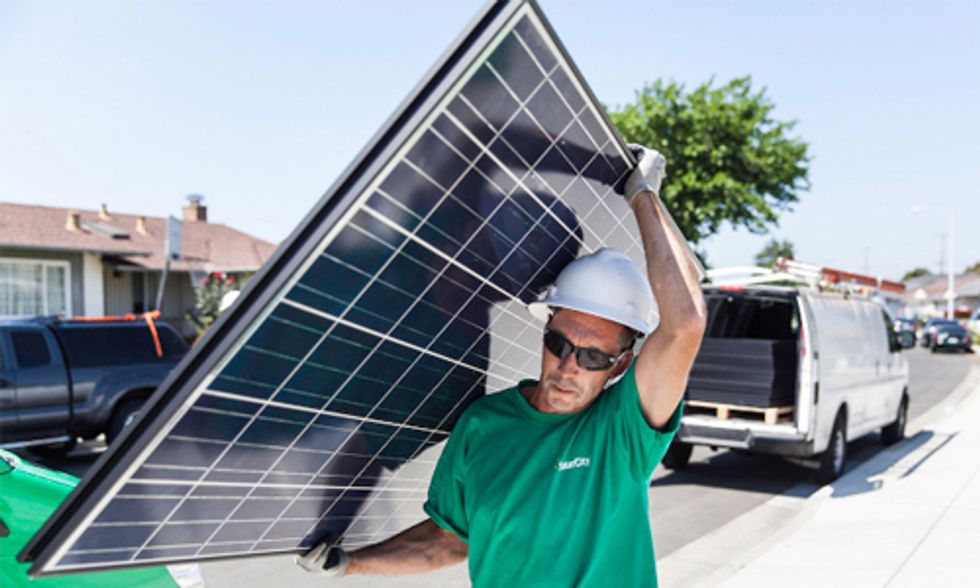 Charles and David Koch, who head Koch Industries, made a significant part of their billions from fossil fuels. And they fight like a pair of angry rattlesnakes to defend their right to make still more billions, spewing climate change-causing greenhouse gases into our atmosphere.

That means they have to fight tooth and nail against all attempts to make energy generation cleaner and more environmentally friendly. They are funding groups, lobbyists and elected officials to engage in battles to beat back the growth of solar energy generation, which is creating jobs at almost 20 times the rate of the overall U.S. economy. Renewable energy advocates across the country are working hard to fend off the lies that the Koch Brothers, ALEC and others have been purchasing.

The battle to beat back solar's rapid growth is being fought across the country. Photo credit: Floridians for Solar Choice

Here are some of the current battlegrounds.

1. Floridians for Solar Choice, a group working to amend the state's constitution to ban any attempts by the government or utility companies to put obstacles and penalties in the way of local, small-scale solar energy generation, has brought together proponents on the left and right. They're working to collect signatures to place the issue on the 2016 ballot to change a Florida law that says customers must buy energy from a utility company.

Despite extensive support from conservatives for the initiative, the Koch-funded group, Americans for Prosperity Florida, is campaigning against it, saying it would lead to higher electricity costs and decreased competition. It put out a press release that said, "In Georgia, similar net metering policies have resulted in rate hikes and did not result in solar becoming any more economically viable." PolitiFact Florida fact checked Americans for Prosperity's claim and rated it "pants on fire," its most emphatic category of falsehood.

2. Sunny Arizona has been the site of attacks against solar, led by operatives with ties to the Koch-backed American Legislative Exchange Council (ALEC) and other Koch-connected groups. As the L.A. Times reported last year, "A major utility and a tangle of secret donors and operatives with ties to ALEC and the Kochs invested millions to persuade state regulators to impose a monthly fee of $50 to $100 on net-metering customers. Two pro-business groups, at least one of which had previously reported receiving millions of dollars from the Koch brothers, formed the campaign's public face. Their activities were coordinated by GOP consultant Sean Noble and former Arizona House Speaker Kirk Adams, two early architects of the Koch network of nonprofits."

In 2013, the Arizona Corporation Commissions, which regulates the state's utilities, granted them a $5 a month fee on customers with solar panels, much less than the $50-$100 a month they had been seeking. As the utilities continue to seek the rate increases and larger fees they claim are necessary to offset solar customers' use of the grid, solar provider SolarCity filed a lawsuit earlier this month against major Arizona utility Salt River Project (SRP) for their new rate plan that penalizes solar customers.

"For the last several years Arizonans have enjoyed the ability to generate their own electricity on their own property," says SolarCity. "Their choices have also helped contribute to the creation of more than 9,000 local solar jobs in Arizona. SRP has sabotaged the ability of Arizona consumers to make this choice if they happen to live in SRP territory. SRP cannot justify the elimination of competition and the denial of Arizonans’ choice in electricity service. In America, we expect companies to respond to competition and innovation with better service, lower costs and increased efficiency. What SRP has done instead is unacceptable and unlawful."

Extra fees and higher rates for customers who install solar panels are being sought by utility companies backed by groups like Americans for Prosperity and ALEC. Photo credit: Floridians for Solar Choice

3. Americans for Prosperity Kansas is leading the campaign to end the renewable standards portolio in the Koch Brothers' home state of Kansas, claiming "Focusing on unaffordable mandates merely drains family budgets." The current standards, passed in 2009, require that 10 percent of electricity currently provided by utilities companies come from renewable energy sources, increasing to 15 percent in 2016 and 20 percent in 2020. Repeal of those standards is currently being considered by the Kansas legislature.

The Wichita Business Journal reported a few weeks ago that Senator Bob Olson, who chairs the utilities committee and has received thousands of dollars in campaign contributions from Koch Industries, shut down questioning from Democratic Senator Tom Hawk regarding the funding source of a study from Utah State University that claimed the standards have cost Kansas 5,500 jobs.

"Environmental groups question the study because Utah State has received more money than most universities from foundations linked to Wichita's Koch Industries, and the lead researcher was Randy Simmons, whose title is Charles G. Koch professor of political economy," said the Wichita Business Journal.

Meanwhile, Topeka-based Westar Energy has a case pending before the utility-regulating Kansas Corporation Commission to allow it to charge a higher rate to customers who generate their own electricity. “This is another attempt by the utility to kill solar in Kansas,” said Aron Cromwell, co-owner of Lawrence, Kansas-based solar installer Cromwell Environmental, told Midwest Energy News. "They have made no effort whatsoever to justify their rates. No study has been done to prove that solar is a cost to ratepayers.”

Koch-funded groups claim renewable energy costs jobs, but solar is one of the fastest growing job sectors in the U.S. Photo credit: Floridians for Solar Choice

4. Last year, Ohio became the first state in the country to backpedal from its 2008 renewable energy standards last June when Governor John Kasich signed the bill that froze the standards for two years. That bill, SB 310, was pushed by—guess who!—Americans for Prosperity and ALEC. Now the legislature has convened a panel empowered to consider whether to repeal the standards permanently, ALEC-written legislation dubbed the "Electricity Freedom Act." Ohio's standards required that a quarter of the state's electricity come from renewable and alternative sources by 2025 and that utilities increase efficiency 22 percent.

“Passing SB 310 is the right thing to do to protect Ohio’s consumers and business owners from higher energy prices,” said Americans for Prosperity state director Eli Miller at the time of the bill's passage in the legislature. “These standards have proven to be unrealistic. The legislature has done the right thing by voting to temporarily freeze these standards so that the economic well-being of our working families and businesses can be factored in before moving forward.”

That's not what a report by Pew Charitable Trusts revealed. It found that the standards had already generated $1.3 billion in clean energy investments including $421 in solar between 2009 and 2013, a period in which solar installations grew by 90 percent, but that investment has already stalled due to the uncertainty of how the legislature might act, and that the freeze and possible repeal threatened thousands of jobs.

Battle Continues in Fight to Save States' Renewable Energy Policies