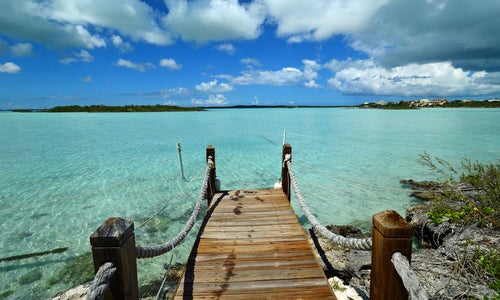 Caribbean island residents pay some of the highest retail electricity prices in the world. Most islands generate 90 – 100 percent of their electricity by burning expensive imported diesel or heavy fuel oil in large generators. Thus Caribbean electricity users pay between $0.20 and $0.50/kWh (kilowatt hour). By comparison, the average for mainland U.S. residential customers is $0.13/kWh; in Hawaii, where they burn oil for much of their electricity, the average is $0.39/kWh. 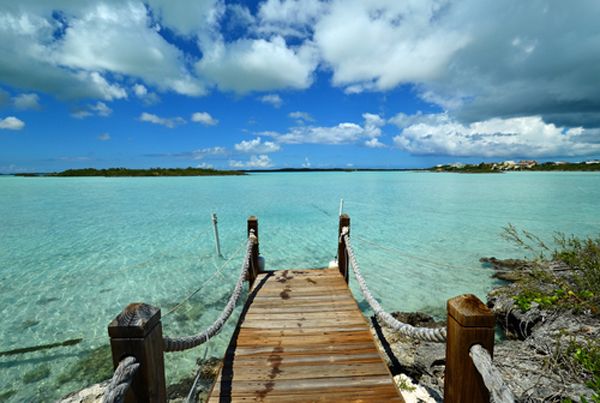 Given the abundant wind and solar resources available in the Caribbean, and the still-falling costs of installing renewable generation compared with converting existing diesel resources to LNG, choosing renewables over LNG now is a smart economic decision.

Naturally, Caribbean islands are in the market for more affordable alternatives. Some islands are seriously pursuing renewables—witness Jamaica’s 20-MW-and-growing wind farm and the Dominican Republic installing one of the largest solar arrays in the Caribbean. Some other islands such as the U.S. Virgin Islands are experimenting with different fossil fuels that don’t require major capital investments, like propane.

But another option looms on the horizon: natural gas. A recent U.S. Energy Information Administration article and a soon-to-be-released International Development Bank study note liquefied natural gas (LNG) is increasingly being touted as a cost-effective solution for the Caribbean.

This is more than unfortunate. Switching from one imported fossil fuel (diesel/oil) to another (LNG)—the latter of which is currently slightly less expensive but much more price-volatile—overlooks the Caribbean’s abundant, domestic supply of cost-effective energy efficiency and renewable energy.

One Colombian island in the western Caribbean, San Andres, is grappling now with the future of its electricity generation, including the relative merits of LNG compared to efficiency and renewables. It becomes quickly clear that there are at least four important reasons LNG is the wrong choice for the Caribbean’s electricity.

1. Efficiency and Renewables are Cheaper than LNG and Diesel

For example, Caribbean wind resources are excellent, measuring an average 7.5 – 9.0 meters per second throughout the year. The wind resources of Colombia’s San Andres exceeds even that of world wind leader Denmark, where wind generated 33 percent of the country’s electricity in 2013, 54 percent for the entire month of December, and more than 100 percent for briefer times. A utility-scale wind turbine in the Caribbean can produce 50 – 100 percent more energy than it would under typical European wind conditions.

Sunshine is also bountiful in the Caribbean, with insolation similar to the sunny Southwestern United States. This again is significantly higher than places like Germany, which recently generated over half its electricity from solar photovoltaics on a single day in June this summer. 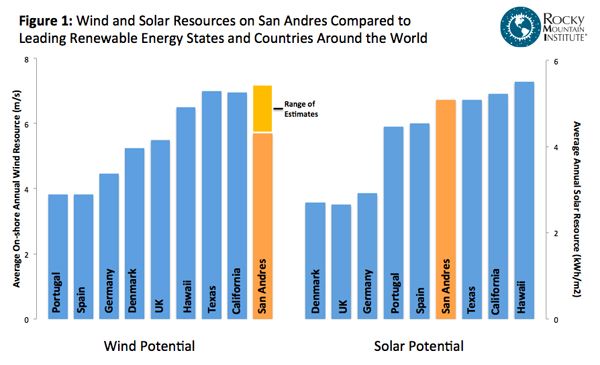 Couple these abundant resources with dramatic, ongoing cost reductions for solar and wind, plus the expensive nature of most Caribbean islands’ diesel-powered electricity grids, and renewable electricity is simply cheaper to generate than fossil fuel-based electricity in most places throughout the Caribbean (see Figure 2). 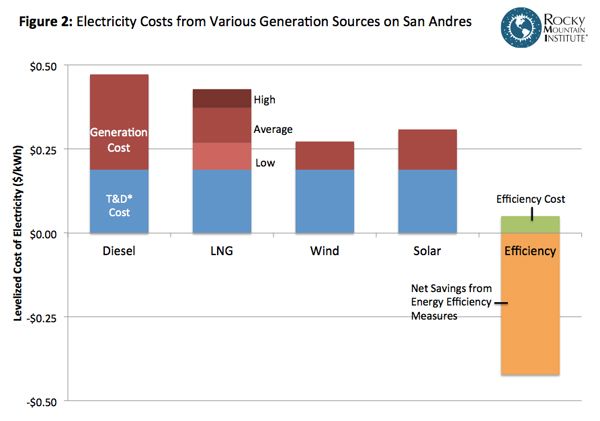 For LNG, three increasing price estimates illustrate how sensitive gas is to market price volatility. Under high LNG prices, switching from diesel to LNG barely makes a dent. Meanwhile, switching to wind could cut the LCOE of electricity on San Andres almost in half. Also unaccounted for here are additional benefits of distributed resources, such as reduced line losses, deferred new distribution system investment, and renewables’ hedge value.