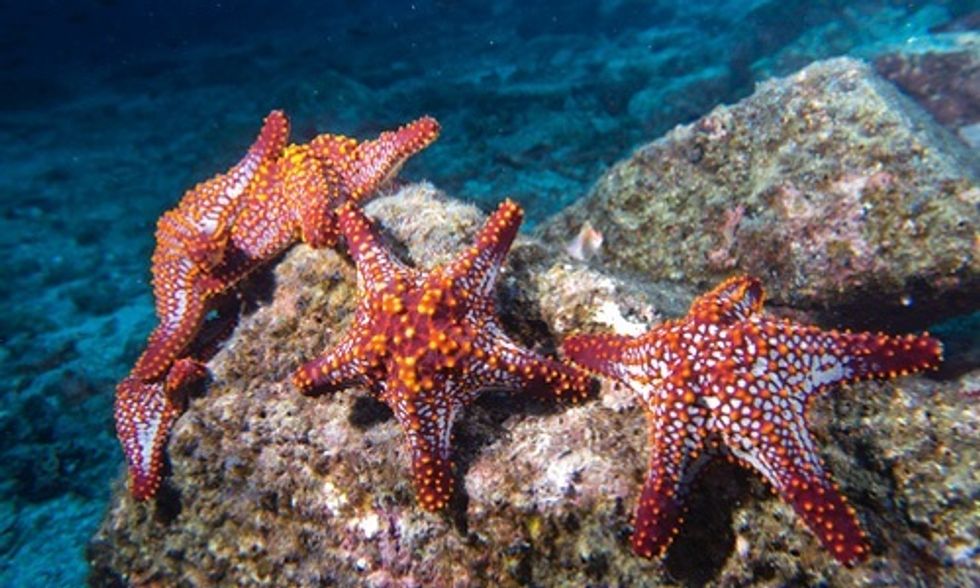 The ocean covers nearly three-fourths of the globe and is home to nearly half of the world’s known species—with countless yet to be discovered. It helps support more than 250 million people who depend directly or indirectly on fishing for their livelihoods. Still, human activities increasingly threaten its health. Although 72 percent of the world is covered by the ocean, less than 2 percent of these waters are fully protected.

Global Ocean Legacy, a project of Pew and its partners, works with local communities, governments, and scientists around the world to protect and conserve some of our most important and unspoiled ocean environments. These efforts have helped double the amount of protected marine habitat worldwide over the last nine years. That includes two recent achievements: expansion of the U.S. Pacific Remote Islands Marine National Monument in September 2014 and the British government’s announcement in March 2015 that it will create the world’s largest fully protected marine reserve in the Pitcairn Islands in the South Pacific Ocean.

Research shows that large, fully protected marine reserves are essential to rebuilding species abundance and diversity and protecting overall ocean health. To commemorate World Oceans Day on June 8, we invite you to watch four videos that highlight why fully protected marine reserves are critical to safeguarding these waters and the broader environment.

Caring for the environment has long been an important element of Palau’s culture. For centuries, chiefs have acted to protect these Pacific waters through the traditional "bul," a moratorium on catching key species or fishing on reefs that provide critical habitat. Commonly referred to as "one of the seven underwater wonders of the world," Palau’s ecosystems contain remarkable biodiversity, including more than 1,300 species of fish, more than 700 species of hard and soft coral, seven of the world’s nine types of giant clam, and non-stinging jellyfish. Pew was invited by Palau’s president to help create a large fully protected marine reserve in the island nation’s exclusive economic zone.

Located in the southeastern Pacific nearly 2,500 miles (4,000 kilometers) from mainland Chile, Easter Island has a rich cultural and environmental heritage. The island’s monumental sculpted heads have stood sentinel over this natural wonder, known as Rapa Nui in local Polynesian language, for centuries. Ancient Polynesians traveled through Easter Island’s waters for thousands of years using only the stars and the ocean for navigation. While largely unexplored, these seas are known to contain geological hot spots and areas of rare biodiversity that sustain highly migratory fish species. They also are known for ancient seamounts, 8.4 million to 13.1 million years old. Pew is working with the Rapa Nui community and the Chilean government to protect these ecologically important waters.

In March 2015, the British government announced its commitment to create the world’s largest fully protected marine reserve in the waters surrounding the Pitcairn Islands. A small U.K. overseas territory in the South Pacific, Pitcairn has one of the largest exclusive economic zones in the world. Within these waters lies one of the best-preserved ecosystems, a complex community of hard and soft corals that is home to hundreds of species of fish, including two found nowhere else on Earth. Pew, on behalf of the Global Ocean Legacy campaign partners, is working with the British government and the Pitcairn Island community to implement the Pitcairn Islands Marine Reserve to safeguard this important habitat for future generations.

The Kermadec region, a remote area between New Zealand’s North Island and Tonga, includes some of the most geologically active and biologically unusual features on Earth. Extending in places to a depth of more than 6.2 miles (10 kilometers), the Kermadec-Tonga Trench is the deepest in the Southern Hemisphere, five times deeper than the Grand Canyon. The waters are teeming with birds, whales, dolphins, fish, turtles, and many unique sea creatures, some that exist only there. The area provides important habitat for deep-diving mammals such as sperm whales. Half of the known beaked whales—at least 10 species—are thought to inhabit these waters, perhaps the world’s richest habitat for these rare and elusive animals.