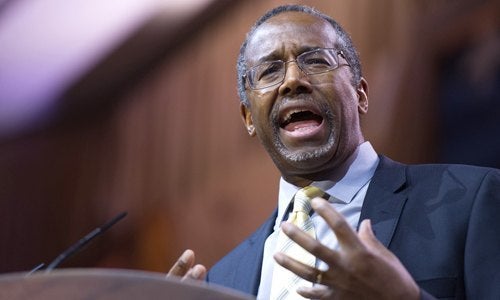 The past week has been a torrent of crazy Ben Carson stories. First he stabbed a child when he was young, and then he didn’t. He got a full scholarship to West Point but it turns out they don’t actually give those. It appears, at this point, basically nothing in his memoir is credible. Let us sort out the latest bizarre tales from the past 48 hours:

This one’s been floating around online for a while but resurfaced on social media yesterday: A video of Ben Carson going after the New World Order which vaguely has to do with atheists and socialist trying to destroy America. As an atheist and a socialist and I can assure Mr. Carson, our goal is not to “destroy” America but rather the people who run it. Nevertheless, check out the clip yourself. Begin at roughly the 0:58 mark:

Guardian Profile: Carson has a painting of him with Jesus in his house

The highlight of the day on Twitter was clearly photos revealed in a rather scathing Guardian profile that dropped Saturday afternoon: 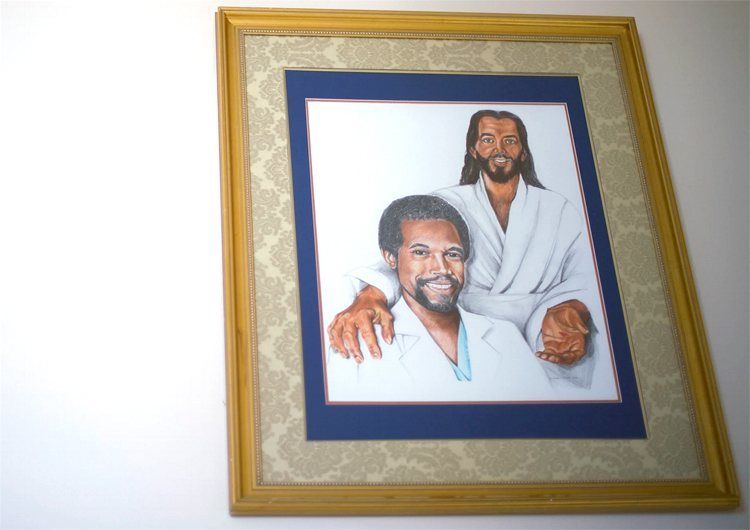 On display in the hallway of Carson’s home is a painting of Carson with Jesus.

You should check out the whole piece, it’s full of gems. His house is like something out of Saddam Hussein’s palace: pictures of himself marked by weird historic fantasy role play.

This is my personal favorite. There’s a parable in Ben Carson’s memoir that The Wall Street Journal has revealed to be entirely bogus. Its tale of Ben Carson being taught a lesson in “honesty” by a Yale professor in a terribly convoluted and implausible way. What’s shocking about the story is not how goofy and made up it obviously is, but how this fact went entirely unnoticed for almost 25 years since his memoirs’ release. Here’s The Journal’s scathing explanation:

In his 1990 autobiography, “Gifted Hands,” Mr. Carson writes of a Yale psychology professor who told Mr. Carson, then a junior, and the other students in the class—identified by Mr. Carson as Perceptions 301—that their final exam papers had “inadvertently burned,” requiring all 150 students to retake it. The new exam, Mr. Carson recalled in the book, was much tougher. All the students but Mr. Carson walked out.

“The professor came toward me. With her was a photographer for the Yale Daily News who paused and snapped my picture,” Mr. Carson wrote. “‘A hoax,’ the teacher said. ‘We wanted to see who was the most honest student in the class.’” Mr. Carson wrote that the professor handed him a $10 bill.

No photo identifying Mr. Carson as a student ever ran, according to the Yale Daily News archives, and no stories from that era mention a class called Perceptions 301. Yale Librarian Claryn Spies said Friday there was no psychology course by that name or class number during any of Mr. Carson’s years at Yale.

First off: Ten dollars? Why would the professor stage this elaborate ruse, then give an “honest” Carson ten dollars? And how does this make Carson “honest” rather than just a sap? Why would a professor sadistically give a harder test after “accidentally burning” an earlier one? Why would this result in a mass walkout—sans Carson—rather than a discussion? What is going on here?

These question remain unanswered by the Carson camp.

This one is equally dubious. The Daily News explained:

Carson, a junior lab assistant with a key to the school’s biology workroom, shepherded his frightened friends to the lab to shield them from the violence, he told the Wall Street Journal.

It makes sense that Carson would, in a party of largely white conservatives, try to position himself as someone who saved whites from a mob of angry blacks but here we are. Like the other allegations, the Carson camp can’t provide any corroborating evidence to back up this claim and, given the manifestly false West Point and Yale tales, we have little reason to believe this story is true either. Carson has a quite a credibility problem he’ll have to answer for in the coming days if he’s serious about running for president. The reality, of course, is that he probably isn’t.