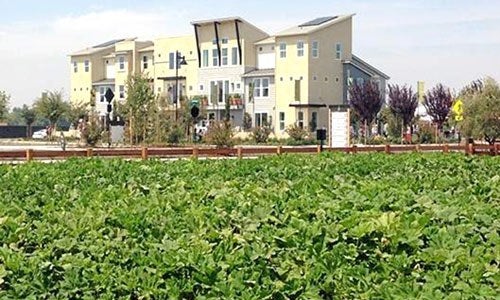 There has been an explosion in urban farming initiatives across the country in recent years. All kinds of creative solutions have emerged in urban agriculture to feed the growing number of city-dwellers worldwide—from growing food in converted shipping containers to operating vertical farms out of abandoned warehouses and even repurposing swimming pools to become garden oases. Even some baseball stadiums like Boston’s Fenway Park are devoting space for stadium-grown grub.

And it’s not just city centers themselves that have become sources of food production once again. Suburbs, where millions of Americans live, are embracing locally grown food as well. Here are four urban and suburban farms changing the American landscape:

It’s a proposed 140 home, 230-acre development 20 minutes outside of Durham, North Carolina. It’s part of a movement being called “agriburbia” or “agrihood“—agriculture projects integrated into suburban development plans. “Wetrock Farm offers a lifestyle connected to our roots,” says the project’s website. “The exciting new concept features a real community with high-quality homes, an organic farm and over 100 acres of preserved open space.”

There will be hiking trails through forested land and picnic areas, and residents can volunteer for and learn from the lead farmer. The developers say the venture is a blend between the often ideologically focused intentional communities and a more traditional suburban housing development.

“There are co-housing communities out there that feature organic farming as an integral part of their model,” developer Rick Bagel told Treehugger. “And there are conventional housing developments that include a farm as part of their master plan. As far as I know, though, we are one of the first conventional housing development that will include a weekly delivery of fresh, organic fruits and veggies grown on-site paid for through your HOA [Homeowners’ Association] fees.”

Students at Thea Bowman Leadership Academy, a high school in Gary, Indiana, developed a business plan and started a farm last year as part of an advanced business class that the charter school piloted. Now the venture has turned into a full-fledged chicken operation with a wholesale certificate of registration through the Indiana State Egg Board.

The entirely student-run project has been a huge success with each of their 17 birds producing between seven and nine dozen eggs a week. While a few eggs have been sold at the school, the vast majority are sold to a local grocery store—Local Organic Affordable Foods or LOAF, in neighboring Chesterton.

“The kids make every single decision for the business,” teacher LaMario Richards told The Times of Northwest Indiana. “They feed the animals. They designed the packaging for the egg carton cover. They make the decisions regarding reinvestment of the money back into the business. They decide what products they want to expand to and any new markets. Any major decisions have to be brought back to the board of directors which consists of myself and Lynda Bodie.

“What I’d like the students to learn from this is what it takes to run a business. I want them to see that they have the ability to do that. I want them to understand about sustainable life. I’m not saying I expect them to be farmers but they need to know where their food comes from.”

The former chairwoman of the Black Panther Party, Elaine Brown, has made headlines in recent days for her ongoing efforts to turn a once-vacant Oakland, California lot into a bountiful farm that employs former offenders. The produce is going to a fine dining restaurant in town. But she doesn’t plan on stopping there. Brown eventually wants to add “a juice bar, fitness center, grocery store and tech design space, along with affordable housing on the city-owned property under the umbrella of the nonprofit organization she founded last year, Oakland & the World Enterprises,” reports KQED of Northern California.

“I’m not in the farm business,” Brown told Civil Eats. “I’m in the business of creating opportunities for Black men and women who are poor and lack the education, skills, and resources to return to a community that is rapidly gentrifying without economic avenues for them in mind.” She sees the venture as part prison re-entry program, part small business startup incubator and part community hub.

The 100-acre mixed-use “farm-to-table community” includes a 7.4-acre farm, but that’s not all. Also part of the “agriburbia” or “agrihood” movement, the site is located at the former Hunt-Wesson tomato cannery facility (hence the name)—a mile from downtown Davis, California. The planned community includes a total of 547 homes ranging from $400,000 to $1 million. If you can afford it, your residence will come replete with a 1.5-kilowatt solar system, bicycle parking and parking spaces wired for electric vehicles, and some home types can be upgraded to support net zero living, according to Curbed.

Thousands visit Cannery in Davis on opening day: Workers were handing out hats, sunglasses and sunscreen to th… http://t.co/eR0Pd43mfR

The Cannery drew thousands of visitors on its opening day in August, in which tours were given to prospective buyers and curious on-lookers. “The opening of the project marks a significant milestone for the city of Davis, with the former cannery site that closed over 15 years ago now representing a model development for other communities in terms of sustainability, aging in place, smart growth and incorporating a working farm into a new neighborhood,” Davis Mayor Dan Wolk told the Daily Democrat. “The Cannery provides much-needed housing for families and seniors in Davis. I am very excited about the grand opening and look forward to it.”

24 Fruits and Veggies That Will Add Years to Your Life