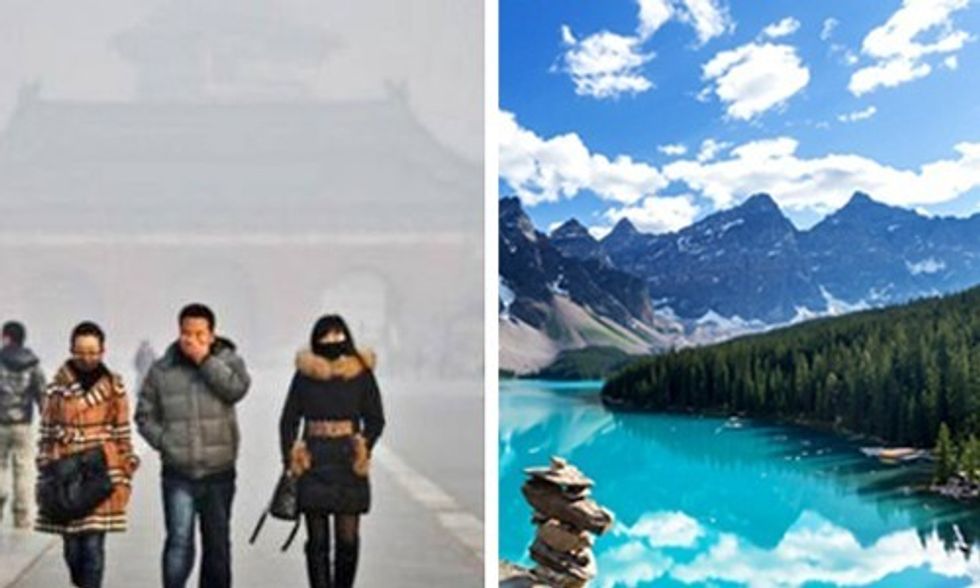 Reminiscent of a scene out of Space Balls (Perri-Air anyone?), a Canadian startup, Vitality Air, is selling bottled air from the Rocky Mountains. It may have started out as a joke, but citizens of smog-choked cities in eastern China are buying it up.

"A gag gift, that's how it started off, but you know what? There's actually a lot of demand for this in … highly polluted countries," co-founder Moses Lam told the Canadian National Post. The company was founded by Lam and Troy Paquette more than a year ago, but only began selling in China less than two months ago.

The idea came when Lam sold a bag of fresh Canadian air on eBay for 99 cents. That's steep enough for something that most people have always considered free. But when a second bag bidded up to $168 “we thought ‘hey, we might have a market for this,'” Lam said.

And people can't get enough of it. “Our first shipment of 500 bottles of fresh air were sold in four days,” Lam told The Telegraph. Flash forward to earlier this week: the company shipped 4,000 more bottles to China, most of which has been bought.

The company claims that its products can help with "hangovers, alertness and working out" while also being "your solution to pollution." The startup is struggling to keep up with demand. Each bottle is filled by hand in the Rockies. They "fill massive cans through clean compression," the company explains on its website, then they bottle it individually at their facility in Edmonton. And they even perform a "comprehensive check" after each can is filled for safety before shipping it out.

For China’s “upper middle class who crave a better quality of life,” Vitality Air gives them the opportunity to “inject a bit of fresh air into their lives,” Harrison Wang with TAK International, Vitality’s Edmonton-based Chinese distributor, told the National Post.

This is not the first time a company has tried selling bottled air, believe it or not, nor is it the first time that Chinese citizens were eager to buy bottled air. In 2013, one Chinese businessman, Chen Guangbiao, sold cans of air reportedly taken from less industrialized regions of China for five yuan ($0.77 U.S. dollars).

China's air pollution problem is nothing new. The country has been grappling with how to clean up its air for years. A documentary highlighting China's deadly air pollution went viral earlier this year with more than 200 million views in the first five days. And a study published in August found that the air in Beijing is so polluted that breathing it does as much damage to the lungs as smoking 40 cigarettes a day, and 4,000 people are dying every day from smog in China citing coal-burning as the likely principal cause.

The issue has received widespread attention again as Beijing issued its first "red alert" for smog last week amid criticism that the government is not doing enough to address the problem. Pollution levels topped off at 634 micrograms per cubic meter in some areas. That's more than 25 times the level recommended by the World Health Organization, which is 25 micrograms per cubic meter. Beijing just issued its second warning Friday as the pollution index is forecasted to exceed 500 micrograms in Beijing and parts of Hebei province over the weekend.

To see the devastating effect pollution has on our bodies, check out this startling video from DNews: