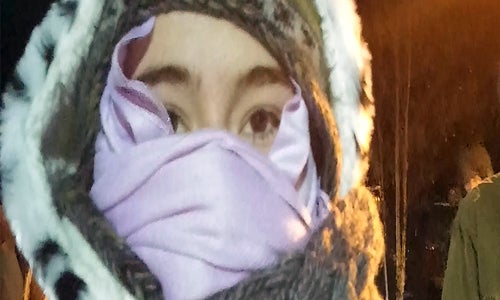 The outside temperature was three degrees Fahrenheit—with wind chills of minus 10 degrees—when 24 defendants, their families and supporters, members of the interested public and members of the press arrived for arraignments in the Town of Reading courthouse last night. Among the crowd was Tompkins County legislator and 2014 Congressional candidate, Martha Robertson of Dryden, who came to serve as a court observer.

http://www.youtube.com/watch?v=8Ev7YweiCEU&feature=em-share_video_user
trial courtroom also is a public place where the people generally—and representatives of the media—have a right to be present, and where their presence historically has been thought to enhance the integrity and quality of what takes place.’ Excluding us from attending the court proceedings three weeks ago makes it difficult for us to have confidence in the integrity of this court’s proceedings.”

Passavant asserted that “people in this town, this county, and this region are poorly served by the legal system that we have witnessed here” and questioned how the local governments of Reading and Schulyer County could be depended upon to serve as a “secure repository for the public trust with respect to the Crestwood project to store volatile gases in salt caverns on the shores of Seneca Lake. Government holds public in low regard, as evidenced by leaving us out in the cold.”

I shared the phone conversation I had on Jan. 6 with Supervisor Switzer, who told me, “If you do not have any business in the courthouse, we are not letting you in.”

Switzer informed me that the policy to close the Reading Town Court building was made “by consensus” with the other members of the board as an ordinance. However, he could not recall the date of this decision nor would he provide me a written copy of the ordinance.

Switzer’s description of the closed courthouse policy seemed vindictive and specific to We Are Seneca Lake as a political group, and, as such, was in violation civil liberties. Among the several reasons he provided for closing the courthouse to the public during hearings that involved protesters, Switzer alleged that “you people” do not “have respect for building,” and said that they had tracked in dirt on the carpet.

By contrast, Reading Town board member Beverly Stamps told me on Jan. 6, that there was no such policy and that no board decision to close the building to the public had been made. Alleging that the town hall is not a courthouse, Stamps told me that “people shouldn’t be in there in the first place.”

Leaving the courthouse after the 5 p.m. arraignments, Ray Schlather, an attorney in Ithaca representing defendant Christopher Tate, addressed to the outside gathering of supporters and press.

“It’s high unusual and frankly unfair, if not unconstitutional, for these folks to be prevented from attending open public court proceedings,” said Schlather. “Whatever is necessary to ensure that the public courts are open to the public, all of the public … will be done. It is absolutely fundamental. It is part of the bedrock of our Constitution. It is part of the bedrock of all civilized nations of the world to have open public proceedings. Our job as citizens, our job as attorneys, as officers of the court, is to ensure that those fundamental principles prevail. We intend to proceed in all manners to protect those rights.”

Twenty-four We Are Seneca Lake defendants were arraigned Jan. 7 in 27 separate hearings. All plead not guilty with two exceptions. Pete Angie, who did not plea, and Ross Horowitz, who pled guilty and requested a dismissal of charges, or reduced or minimal fine, on the grounds that he was at the protest in his capacity as a photographer. His sentencing was deferred until Jan 21.