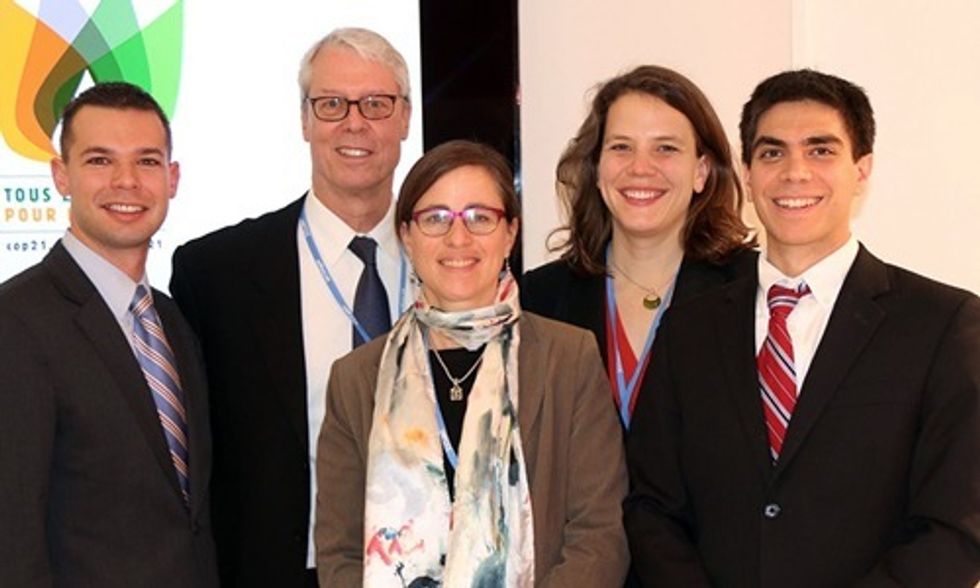 In Paris, California Senate President Pro Tempore Kevin De León was among those releasing the letter. California recently passed legislation to achieve 50 percent clean energy by 2030 and is the world’s 7th largest economy.

“California’s example shows that climate action can be an engine for broadly shared economic prosperity,” said De León. “By promoting the development of clean energy resources, we are simultaneously reducing greenhouse gas emissions, improving air quality and creating jobs that can lift families out of poverty. If Congress won’t act, it’s incumbent on state and local leaders to do the job for them.”

The announcement focused on the success state and local governments are achieving in clean energy innovation and implementation.

In New York, Gov. Andrew Cuomo recently enacted a mandate that 50 percent of all electricity consumed in New York by 2030 come from renewable energy services and has committed to reducing greenhouse gas emissions by 40 percent.

New York Assembly person Brian Kavanagh, who chairs the nonpartisan New York State Caucus of Environmental Legislators and was at the Paris talks, said, "Progress in Paris is critically important, but whatever the outcome of international negotiations, we know we have a real opportunity to chart a new course at home. The U.S. must take action to aggressively curb climate-changing pollution. As a country and in each of our states, we can move decisively toward clean renewable energy, which will create good jobs and foster prosperous, healthy communities today and for future generations."

“Our region used to be coal country and now is powered by 40 percent wind. That's the future that cities and states are creating,” said Des Moines, Iowa Mayor Frank Cownie. “Where there used to be 23 coal mines 100 years ago in and around the city, now we are building a green space corridor and new industries. It's time for cities, states, the U.S. and the world to aggressively commit to creating a better, clean energy future."

“We organized this initiative to highlight the important work state and local governments are doing to promote clean energy and reduce carbon pollution, despite many in Congress’ complete lack of leadership to protect our families and communities,” said Cornell du Houx. “We need to protect our nation and the world from the real threats caused by climate change. A recent Pew study found ISIL or Daesh and climate change are seen as the top two global threats and the two are interlinked. As a former Marine and now naval officer, I have seen this link firsthand. Instability caused by extreme weather helps terrorists like Daesh recruit fighters—Syria suffered an unusually severe drought that helped trigger the conflict.”

“The political will to act on climate change exists in every state and community. But it's been drowned out by the millions of dollars dirty energy companies spend to sow doubt and denial,” said Frongillo. “The decades of deception are over: science is clear on the necessity to move off fossil fuels and Exxon-Mobil is under investigation for misleading shareholders and the American people. We need elected officials to lead a fair and swift transition to 100 percent clean energy. The transition to renewables can create jobs and prosperous opportunities across the U.S. and the world. Now it's time to lead.”

This year, the U.S. has hit many clean energy milestones. America has added more clean power than natural gas, with clean energy generation up 11 percent while natural gas generation declined. Demonstrating the opportunity, solar jobs grew 20 times faster than the rest of the economy.

The investment of New England Regional Greenhouse Gas Initiative (RGGI) estimates a return of more than $2.9 billion in lifetime energy bill savings to more than 3.7 million participating households and 17,800 businesses. In California, a similar program generated $969 million in revenue for the state through the end of 2014 and is expected to generate $2 billion a year or more in the future.

The RGGI states have experienced more than a 40 percent reduction in power sector carbon pollution since 2005, while the regional economy has grown eight percent. “This proves that we can reduce pollution that’s putting our communities’ health at risk while growing jobs and prosperity. From East Coast to West Coast—states and local communities are leading the way,” said Katz.

“Cities and states and on the front lines of climate change. As sea levels rise, our city is in danger,” said West Palm Beach, Florida Mayor Jeri Muoio. “To protect our future and lead by example, we have made a commitment to power all our city vehicles without fossil fuels.”

The initiative also supports the implementation of President Obama's Clean Power Plan, as it will bring the U.S. within seven percent of the stated goal. “We appreciate the administration’s leadership and commitment to working with state and local government,” said Cornell du Houx. “The launch of this letter is only the beginning. We will be working with state and local elected officials across America to ensure a healthier and safer future for our children. As leaders responsible for America’s present and future prosperity, we must take action now.”