350.org Launches Do the Math Tour 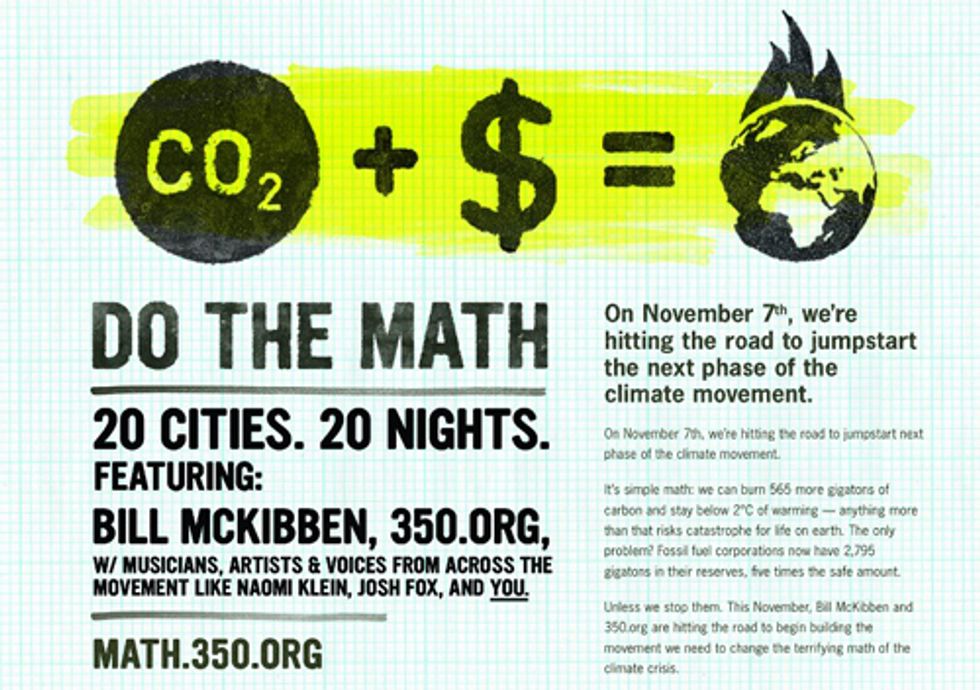 This July, as the country reeled from the worst drought since the dust-bowl, Bill McKibben published an article in Rolling Stone magazine called Global Warming’s Terrifying New Math. In the piece, McKibben explained in stark mathematical terms the crisis that the planet currently finds itself in. In order to limit warming to below 2 degrees C, McKibben wrote, scientists warn that we can only emit 565 more gigatons of CO2, but the fossil fuel industry currently has 2,795 gigatons of CO2 in their reserves and is spending millions every day looking for more carbon to burn.

Once you “do the math,” McKibben argued, there was only one possible conclusion. “But what all these climate numbers make painfully, usefully clear is that the planet does indeed have an enemy—one far more committed to action than governments or individuals. Given this hard math, we need to view the fossil-fuel industry in a new light. It has become a rogue industry, reckless like no other force on Earth. It is Public Enemy Number One to the survival of our planetary civilization.”

With more than 112,000 Facebook shares, the article became one of the most viewed and widely-shared pieces ever posted on RollingStone.com. Or, as McKibben told Oilprice.com in July, the piece was "wickedly viral."

This fall, McKibben will embark on a 20 city "Do The Math" tour of the U.S. A TED-talk meets concert tour, the events will help spread the new terrifying math laid out in McKibben's Rolling Stone piece, as well as build support for a fossil fuel divestment campaign. The effort will focus on college campuses and religious institutions and is modeled on the successful divestment campaigns during the South African anti-apartheid movements of the 1980s.

"The fossil-fuel industry is obviously a tougher opponent, and even if you could force the hand of particular companies, you'd still have to figure out a strategy for dealing with all the sovereign nations that, in effect, act as fossil-fuel companies," McKibben wrote in Rolling Stone. "But the link for college students is even more obvious in this case. If their college's endowment portfolio has fossil-fuel stock, then their educations are being subsidized by investments that guarantee they won't have much of a planet on which to make use of their degree."