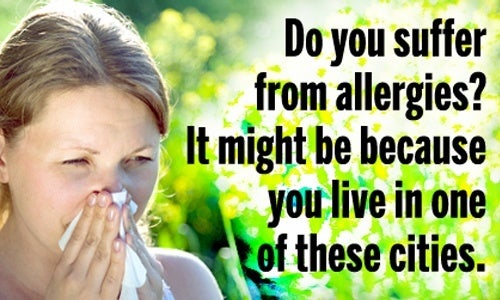 One of the hidden costs of climate change is its health costs. As more pollutants are pumped into the air we breathe, the health impacts mount. They include asthma, which has been increasing steadily especially in poorer neighborhoods, and allergies. Now the Natural Resources Defense Council (NRDC) has released a report, Sneezing and Wheezing: How Climate Change Could Increase Ragweed Allergies, Air Pollution and Asthma, which identifies the most vulnerable regions and cities, including the 35 “Sneeziest and Wheeziest” cities, which have the largest concentration of factors that can affect asthma. 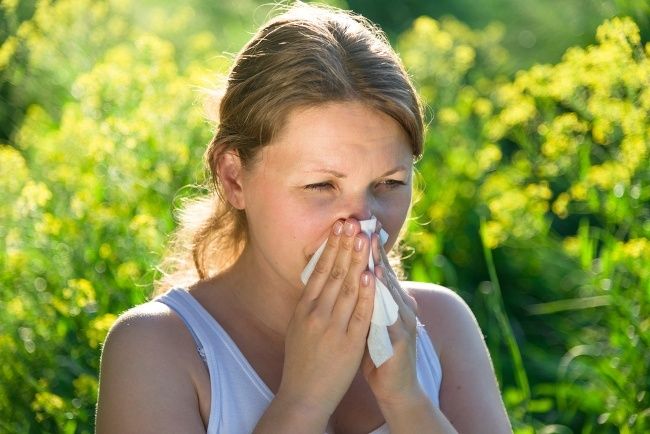 “Scientific studies have shown that our changing climate could favor the formation of more ozone smog in some areas and increase the production of allergenic pollen such as that released by the ragweed plant, the principal source of pollen associated with allergic rhinitis,” the study says.

“This is bad news for allergy sufferers and asthmatics because both ragweed pollen and high levels of ozone smog can trigger asthma attacks and worsen allergic symptoms in adults and children. Moreover, studies show that people exposed to both ragweed allergens and ozone are likely to become more ill than people exposed to just one of the two. These negative health effects are expected to worsen if carbon dioxide (Co2) concentrations keep rising and climate change continues unchecked.”

“Americans deserve to breathe clean air, but today millions of us are sneezing and wheezing from allergies and asthma linked to climate-fueled ragweed and ozone pollution,” said the report’s lead author Juan Declet-Barreto. “This double-whammy health threat will only intensify, and affect more people, if we don’t take steps to reduce climate change now.

“We think of the state of Ohio as the #1 wheeziest, sneeziest state because it has seven cities,” said Declet-Baretto. “These cities are home to five million Ohioans, a sizable amount of population exposed to ozone health risk.”

He suggests that Ohio increase its investment in clean energy sources, the opposite of what the state has been doing. Last year, the state became the first in the U.S. to freeze its Renewable Energy Standards and it is now considering repealing them entirely. 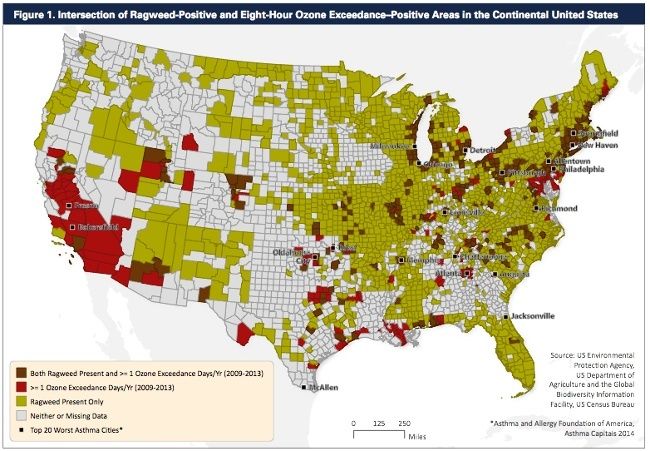 The number of people impacted is huge. According to the report, 50 million people in the U.S. have some type of nasal allergy, with about 26 million children and adults dealing with asthma.

That’s particularly pronounced in northern regions such as Ohio and Chicago, she said.

“Changes in climate are impacting allergies with later fall frost and earlier spring thaw,” Ahdoot said. “Most people feel allergies have gotten worse, and they have. Total pollen counts have increased by 40 percent in part due to changes in atmosphere. In northern regions, the [allergy] season increased by nearly 20 days. In my practice in past month, I was flooded with parents and children experiencing intractable allergies. Most require multiple medications and often that is not enough. We have had two admissions this year—toddlers experiencing severe asthma attacks requiring hospitable admissions.”

The NRDC report also made some suggestions about what we can do to address the problem, both on a personal and policy level. Policywise, it advocates for limiting carbon emissions from power plants, lowering the allowable standard for ozone, improving data collection on ozone and ragweed pollution, and making that information more accessible to the public and the scientific community. It urges individuals to keep track of pollen levels, avoid strenuous outdoor activities on high pollen count and ozone days, and washing bedding and showering frequently, among other things.

“Child health is inextricably linked to climate change,” said Dr. Ahdoot, pointing out that public health initiatives on issues such as tobacco and lead paint have been essential in making children healthier. “The Clean Power Plan is the next essential legislation needed to protect the health of children in the U.S.”

“Climate change is the central challenge of our time,” said Declet-Baretto. “We need to take steps to reduce its strength.”