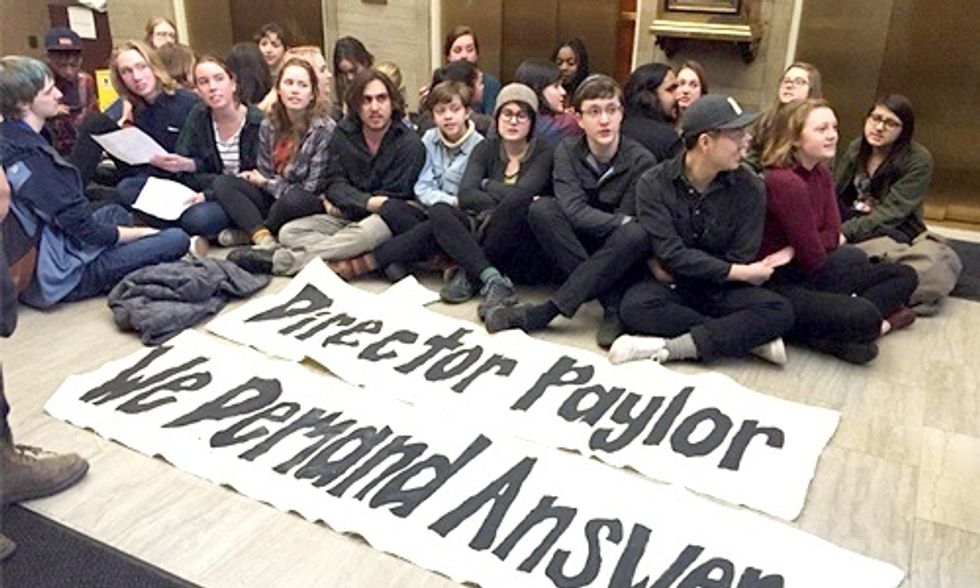 Thiry-five students from the Virginia Student Environmental Coalition are refusing to leave the Virginia Department of Environmental Quality's (DEQ) lobby until the director, David Paylor, complies with their demands regarding Dominion Resources' dumping of coal ash wastewater into the James River and Quantico Creek. This action is taking place in light of the recent news that Dominion illegally dumped 33.7 million gallons of untreated wastewater into Quantico Creek last summer.

The demands are as follows:

1. The DEQ repeals the permits issued to Dominion to begin dumping coal ash wastewater from their Bremo and Possum Point power plants.

2. The current permits are re-issued only after an investigation into the 2015 dumping of untreated wastewater into Quantico Creek.

3. The permits for coal ash wastewater release are rewritten to comply with the best available technology standards, in accordance with the Clean Water Act and that a mechanism for independent third party monitoring is implemented.

Students from the University of Virginia, University of Mary Washington, College of William & Mary, Virginia Tech and Virginia Commonwealth University entered the headquarters at 629 E Main St, Richmond, Virginia, at 10 a.m. and presented their intentions and demands, requesting to speak with Paylor immediately. A rally is also taking place outside of the building.

“David Paylor can't keep his story straight regarding the wastewater dumping that took place last summer," Sarah Kinzer, a sophomore at the University of Mary Washington, said. "If this is because he is covering for Dominion's illegal activities, then how can we trust him to make future decisions regarding our environmental safety? If this is not the case, then why is he failing to address the issue now?"

Kendall King, the Virginia Student Environmental Coalition chair, agrees. “If David Paylor cannot adequately meet the health and safety needs of Virginia residents, then he is not fulfilling his role as DEQ Director and we are prepared to demand his resignation," she said.

“These incidents of environmental injustice are not isolated," Jong Chin, a senior at James Madison University, said. "In Flint, Michigan, we've recently seen what devastating effects that water containing concentrations of heavy metals can have on communities. This national pattern of water safety violations is indicative of widespread systemic issues."

“The coal ash wastewater dumping is only one example of Dominion's tendency to value profit over the safety of Virginians," Aaron Tabb, a junior at Virginia Commonwealth University, said. "This corporation continually endangers our health and safety by burning fossil fuels and building fracked gas pipelines. This is why, as students, we fight for fossil fuel divestment while simultaneously working to prevent Dominion from further endangering our safety. We need to cut all ties with fossil fuel companies."

Anderson Cooper Takes In-Depth Look at 'The King of Coal'